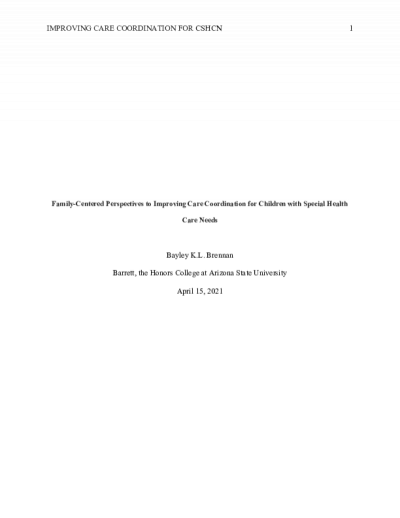 It is well known that the lack of care coordination in the healthcare system causes numerous problems including cost inefficiency and inconsistent care, specifically for complex pediatric and adult patients. Many pediatric patients have complex medical and social service needs…

It is well known that the lack of care coordination in the healthcare system causes numerous problems including cost inefficiency and inconsistent care, specifically for complex pediatric and adult patients. Many pediatric patients have complex medical and social service needs which can be expensive for both the patient’s parents and the general healthcare system. Therefore, it is difficult for the healthcare system to deliver the highest quality care possible, due to the number of appointments that have to be scheduled (with some being out of state), the large volume of physical health records, and overall lack of time parents have to coordinate this care while also caring for themselves and other family members. It is integral to find a more efficient way to coordinate care for these patients, in order to improve overall care, cost efficiency, and outcomes. <br/>A number of stakeholders in Arizona came together to work on this problem over several years. They were funded through a PCORI Eugene Washington Engagement grant to investigators at ASU. This project, Take Action for Arizona's Children through Care Coordination: A Bridge to Action was developed in order to further develop a research agenda and build the network (PCOR). Regional conferences were conducted in Flagstaff, Yuma, Phoenix, and Tucson, as well as a final capstone conference held in Phoenix. At these conferences, frustrations, suggestions, and opinions regarding Children with Special Health Care Needs (CSHCN) and navigating the healthcare system were shared and testimonials were transcribed.<br/>This study focused on the capstone conference. The study design was a strategic design workshop; results of the design analysis were analyzed qualitatively using descriptive content analysis. Themes described parent’s common experiences navigating the system, impacts resulting from such experiences, and desires for the care coordination system. Quotes were then grouped into major themes and subthemes for the capstone conference. After these themes were determined, the overarching goals of stakeholders could be assessed, and implementation projects could be described.