Global climate models predict increases in precipitation events in the Phoenix-metropolitan area and with the proposition of more flooding new insights are needed for protecting roadways and the services they provide. Students from engineering, sustainability, and planning worked together in ASU’s Urban Infrastructure Anatomy Spring 2016 course to assess:
1. How historical floods changed roadway designs.
2. Precipitation forecasts to mid-century.
3. The vulnerability of roadways to more frequent precipitation.
4. Adaptation strategies focusing on safe-to-fail thinking.
5. Strategies for overcoming institutional barriers to enable transitions.
The students designed an EPA Storm Water Management Model for the City of Phoenix and forced it with future precipitation forecasts. Vulnerability indexes were created for infrastructure performance and social outcomes. A multi-criteria decision analysis framework was created to prioritize infrastructure adaptation strategies. 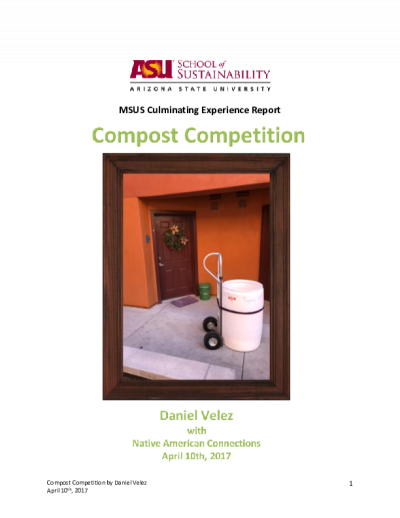 Greenhouse gas (GHG) emissions cause climate change, and if the world does not lower its GHG emissions soon, it will cause irreversible damage that will have overwhelmingly negative cascading effects…

Greenhouse gas (GHG) emissions cause climate change, and if the world does not lower its GHG emissions soon, it will cause irreversible damage that will have overwhelmingly negative cascading effects on the entire planet (Mann & Kump, 2008). Up to 47% of the United States GHG emissions are the result of energy used to produce, process, transport, and dispose of the food we eat and the goods that we consume (US EPA, 2009). The linear-economy status quo does nothing to slow down climate change because it puts resources into landfills. This project promotes a circular economy which combats climate change by reusing resources that are at the end of their life cycle, e.g., food waste soil. The project was a month-long compost competition at an apartment building in Phoenix, AZ that houses 194 residents. The apartment building, Urban Living 2 (UL2), is subsidized housing owned by Native American Connections (NAC), a non-profit organization. The project’s main objective was to increase waste diversion. This was done through composting and improving zero-waste capacity. The compost competition included activities to change community behavior such as private and public commitments, a community barbecue, a movie night (which replaced a planned field trip), and a visioning meeting. By the end of the project, 22% of the tenants were composting. Over a year-long period, this equates to a diversion of, 6000 pounds from the landfill and 1.59 metric tons of Carbon Dioxide equivalent (MTCO2E). The waste diversion increased from 28% to 38%. Tenant participation trended upwards during the project and as the social norm develops over time, more tenant participation is expected even after the competition is over. The six indicators that were used to determine the zero-waste capacity, collectively went up by 1.24 points on a five-point scale. This project will be used as a model for NAC for its other 16 properties in the Valley.