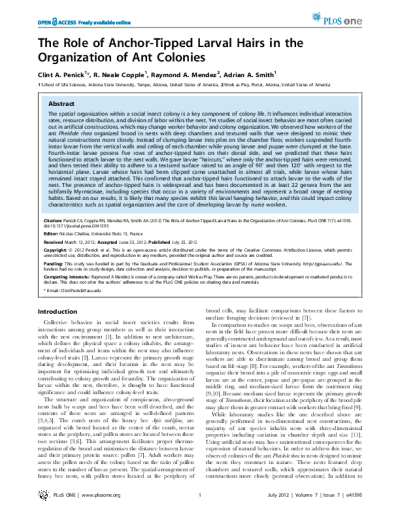 The spatial organization within a social insect colony is a key component of colony life. It influences individual interaction rates, resource distribution, and division of labor within the nest. Yet…

The spatial organization within a social insect colony is a key component of colony life. It influences individual interaction rates, resource distribution, and division of labor within the nest. Yet studies of social insect behavior are most often carried out in artificial constructions, which may change worker behavior and colony organization. We observed how workers of the ant Pheidole rhea organized brood in nests with deep chambers and textured walls that were designed to mimic their natural constructions more closely. Instead of clumping larvae into piles on the chamber floor, workers suspended fourth-instar larvae from the vertical walls and ceiling of each chamber while young larvae and pupae were clumped at the base. Fourth-instar larvae possess five rows of anchor-tipped hairs on their dorsal side, and we predicted that these hairs functioned to attach larvae to the nest walls. We gave larvae “haircuts,” where only the anchor-tipped hairs were removed, and then tested their ability to adhere to a textured surface raised to an angle of 90° and then 120° with respect to the horizontal plane. Larvae whose hairs had been clipped came unattached in almost all trials, while larvae whose hairs remained intact stayed attached. This confirmed that anchor-tipped hairs functioned to attach larvae to the walls of the nest. The presence of anchor-tipped hairs is widespread and has been documented in at least 22 genera from the ant subfamily Myrmicinae, including species that occur in a variety of environments and represent a broad range of nesting habits. Based on our results, it is likely that many species exhibit this larval hanging behavior, and this could impact colony characteristics such as spatial organization and the care of developing larvae by nurse workers.

Determining the correlation between dragonfly wing morphology and flying maneuverability

Flight is an alternative form of locomotion with advantages that include increased ability to traverse long distances and readily escape prey. Only those animals with proper machinery are capable of…

Flight is an alternative form of locomotion with advantages that include increased ability to traverse long distances and readily escape prey. Only those animals with proper machinery are capable of flight. Wings, the machinery that enables flight, vary greatly among the wide array of animals that employ flight for locomotory purposes. Considering that form often follows function, wings are likely structured depending upon the specific flight patterns and behaviors of a particular species. Such structure must be adequate enough to effectively and efficiently create the lift and thrust necessary for flight performance. Therefore, one can expect great divergence in wing structure given the diversity of flight behavior seen within the animal kingdom. To determine how variation in wing morphology contributes to flight function, we studied dragonflies (Odonata), a group of highly maneuverable and acrobatic fliers. We assessed the wing size, morphology of the leading edge, and body dimensions of 39 dragonfly and 3 damselfly species to test how they correlated with one another. We hypothesized that these parameters would align with the known Odonata wing structure as it relates to the maximization of flight maneuverability. Relationships including wing dimensions compared to one another, body dimensions of an individual, cell shapes formed via venation throughout the wing, and leading edge diameter, were fairly consistent across the species under consideration. Cell height was the key component contributing to leading edge structure and increasing the height of the wing as a whole.