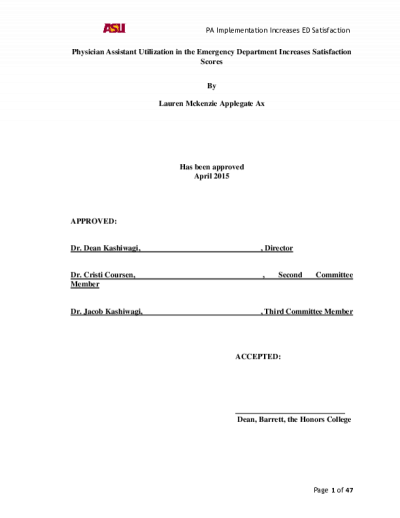 As a medical scribe working in an Emergency Department (ED) at Banner Gateway Medical Center (BGMC), the researcher was able to identify how the work flow and satisfaction of those…

As a medical scribe working in an Emergency Department (ED) at Banner Gateway Medical Center (BGMC), the researcher was able to identify how the work flow and satisfaction of those in the ED would decrease when there were no Physician Assistants (PA's) being utilized during specific shifts. As for other shifts where PA's were on shift and were being utilized, the work flow would drastically increase, more patients would be seen in less time and the satisfaction of the researchers co-workers would increase. This paradigm of how PA's are implemented brought the researcher to understand the overall success of having Physicians Assistants in partnership with Physicians, consulting physicians and management in the ED. The researcher conducted a five-month long analyses of how implementation of Physician Assistants in the ED could effect overall satisfaction. The researcher looked at the satisfaction of the PAs themselves, attending physicians, nurses, nursing assistants, ED manager, ED director, ED co-director and the patients themselves. The researcher collected questionnaires, conducted interviews and retrieved data from Banner Health Services for the year 2014 to compare her data. The researcher conducted the study both at Banner Gateway Medical Center (BGMC) Emergency Department and also at Banner Baywood Medical Center (BBMC) ED. In comparison of the data collected from BGMC ED to BBMC ED resulted in a significant difference in overall satisfaction based on implementation. Although both emergency departments are owned by the same Banner corporation and only a few miles apart in distance, they implement Pas differently. The difference in the implementation did prove to effect the overall satisfaction. BGMC ED employees as well as manager and patients were more satisfied than those of BBMC ED. Some of the noted differences were that BBMC PAs see more patients per hour, they see higher acuity patients, are less compensated, are placed further apart from their attending physicians and other staff in the ED, there is minimal communication, PAs feel there voice is not heard and they feel pushback on feedback with no plan for improvement. BGMC PAs reported overall increase in satisfaction as compared to BBMC because of the increased communication, placement of PAs within the ED is closer to attending physicians and other staff, they see lower acuity patients, are better compensated and monthly meetings on improvements that can be made and the PAs feel their voice is being heard. Productivity scores for BGMC ED PAs were 1.71 patients per hour as compare to BBMC ED which was 1.86 patients per hour. BBMC PA patient satisfaction on average was 60.6 as compared to BGMC where the PA average satisfaction was 67.8.