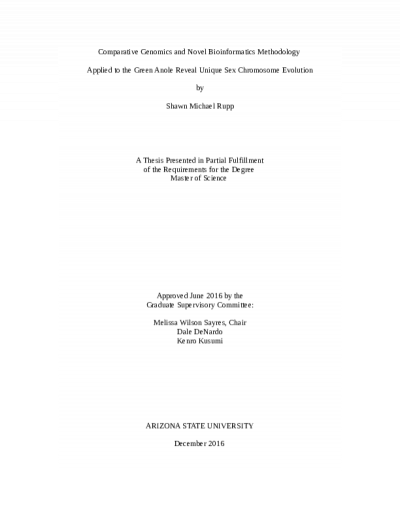 In species with highly heteromorphic sex chromosomes, the degradation of one of the sex chromosomes can result in unequal gene expression between the sexes (e.g., between XX females and XY…

In order to address this, multiple comparative genomics and bioinformatics analyses were conducted to elucidate patterns of evolution in the green anole and across multiple anole species. Comparative genomics analyses were used to infer additional X-linked loci in the green anole, RNAseq data from male and female samples were anayzed to quantify patterns of sex-biased gene expression across the genome, and the extent of dosage compensation on the anole X chromosome was characterized, providing evidence that the sex chromosomes in the green anole are dosage compensated.

In addition, X-linked genes have a lower ratio of nonsynonymous to synonymous substitution rates than the autosomes when compared to other Anolis species, and pairwise rates of evolution in genes across the anole genome were analyzed. To conduct this analysis a new pipeline was created for filtering alignments and performing batch calculations for whole genome coding sequences. This pipeline has been made publicly available.