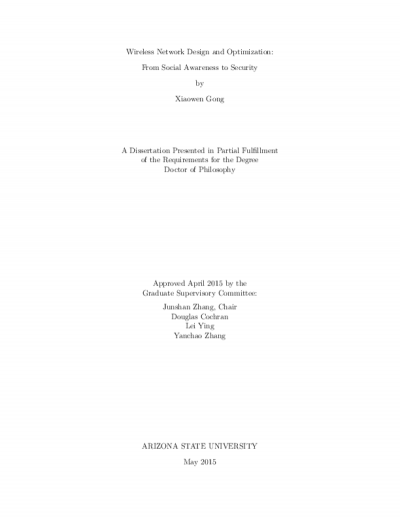 Wireless network design and optimization: from social awareness to security

The first part studies socially-aware mobile networking and computing. First, it studies random access control and power control under a social group utility maximization (SGUM) framework. The socially-aware Nash equilibria (SNEs) are derived and analyzed. Then, it studies mobile crowdsensing under an incentive mechanism that exploits social trust assisted reciprocity (STAR). The efficacy of the STAR mechanism is thoroughly investigated. Next, it studies mobile users' data usage behaviors under the impact of social services and the wireless operator's pricing. Based on a two-stage Stackelberg game formulation, the user demand equilibrium (UDE) is analyzed in Stage II and the optimal pricing strategy is developed in Stage I. Last, it studies opportunistic cooperative networking under an optimal stopping framework with two-level decision-making. For both cases with or without dedicated relays, the optimal relaying strategies are derived and analyzed.

The second part studies radar sensor network coverage for physical security. First, it studies placement of bistatic radar (BR) sensor networks for barrier coverage. The optimality of line-based placement is analyzed, and the optimal placement of BRs on a line segment is characterized. Then, it studies the coverage of radar sensor networks that exploits the Doppler effect. Based on a Doppler coverage model, an efficient method is devised to characterize Doppler-covered regions and an algorithm is developed to find the minimum radar density required for Doppler coverage.

The third part studies cyber security and privacy in socially-aware networking and computing. First, it studies random access control, cooperative jamming, and spectrum access under an extended SGUM framework that incorporates negative social ties. The SNEs are derived and analyzed. Then, it studies pseudonym change for personalized location privacy under the SGUM framework. The SNEs are analyzed and an efficient algorithm is developed to find an SNE with desirable properties. 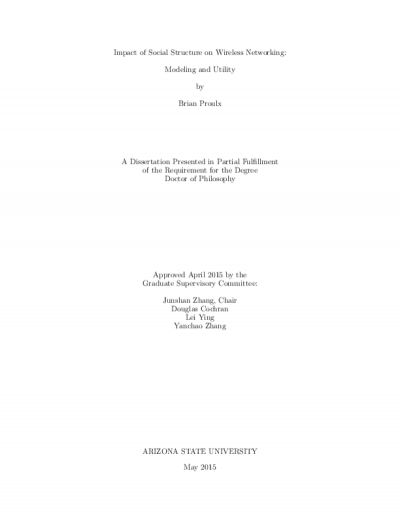 Impact of social structure on wireless networking: modeling and utility

The explosive growth of data generated from different services has opened a new vein of research commonly called ``big data.'' The sheer volume of the information in this data has yielded new applications in a wide range of fields,…

The explosive growth of data generated from different services has opened a new vein of research commonly called ``big data.'' The sheer volume of the information in this data has yielded new applications in a wide range of fields, but the difficulties inherent in processing the enormous amount of data, as well as the rate at which it is generated, also give rise to significant challenges. In particular, processing, modeling, and understanding the structure of online social networks is computationally difficult due to these challenges. The goal of this study is twofold: first to present a new networked data processing framework to model this social structure, and second to highlight the wireless networking gains possible by using this social structure.

The first part of the dissertation considers a new method for modeling social networks via probabilistic graphical models. Specifically, this new method employs the t-cherry junction tree, a recent advancement in probabilistic graphical models, to develop a compact representation and good approximation of an otherwise intractable probabilistic model. There are a number of advantages in this approach: 1) the best approximation possible via junction trees belongs to the class of t-cherry junction trees; 2) constructing a t-cherry junction tree can be largely parallelized; and 3) inference can be performed using distributed computation. To improve the quality of approximation, an algorithm to build a higher order tree gracefully from an existing one, without constructing it from scratch, is developed. this approach is applied to Twitter data containing 100,000 nodes to study the problem of recommending connections to new users.

Having developed a framework to model social structure in online social networks, the study then highlights two approaches for utilizing this social network data in existing wireless communication networks. The first approach is a novel application: using social networks to enhance device-to-device wireless communication. It is well known that wireless communication can be significantly improved by utilizing relays to aid in transmission. Rather than deploying dedicated relays, a system is designed in which users can relay traffic for other users if there is a shared social trust between them, e.g., they are ``friends'' on Facebook, and for users that do not share social trust, implements a coalitional game framework to motivate users to relay traffic for each other. This framework guarantees that all users improve their throughput via relaying while ensuring that each user will function as a relay only if there is a social trust relationship or, if there is no social trust, a cycle of reciprocity is established in which a set of users will agree to relay for each other. This new system shows significant throughput gain in simulated networks that utilize real-world social network traces.

The second application of social structure to wireless communication is an approach to reduce the congestion in cellular networks during peak times. This is achieved by two means: preloading and offloading. Preloading refers to the process of using social network data to predict user demand and serve some users early, before the cellular network traffic peaks. Offloading allows users that have already obtained a copy of the content to opportunistically serve other users using device-to-device communication, thus eliminating the need for some cellular traffic. These two methods work especially well in tandem, as preloading creates a base of users that can serve later users via offloading. These two processes can greatly reduce the peak cellular traffic under ideal conditions, and in a more realistic situation, the impact of uncertainty in human mobility and the social network structure is analyzed. Even with the randomness inherent in these processes, both preloading and offloading offer substantial improvement. Finally, potential difficulties in preloading multiple pieces of content simultaneously are highlighted, and a heuristic method to solve these challenges is developed. 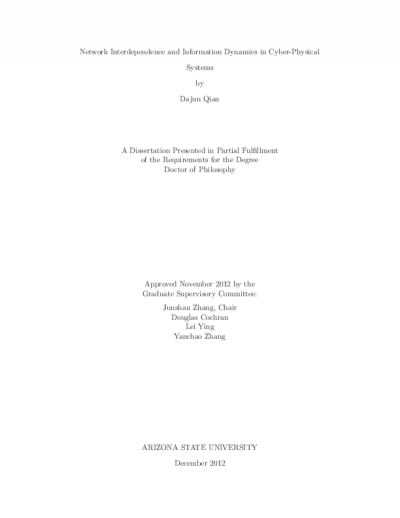 The cyber-physical systems (CPS) are emerging as the underpinning technology for major industries in the 21-th century. This dissertation is focused on two fundamental issues in cyber-physical systems: network interdependence and information dynamics. It consists of the following two main…

The cyber-physical systems (CPS) are emerging as the underpinning technology for major industries in the 21-th century. This dissertation is focused on two fundamental issues in cyber-physical systems: network interdependence and information dynamics. It consists of the following two main thrusts. The first thrust is targeted at understanding the impact of network interdependence. It is shown that a cyber-physical system built upon multiple interdependent networks are more vulnerable to attacks since node failures in one network may result in failures in the other network, causing a cascade of failures that would potentially lead to the collapse of the entire infrastructure. There is thus a need to develop a new network science for modeling and quantifying cascading failures in multiple interdependent networks, and to develop network management algorithms that improve network robustness and ensure overall network reliability against cascading failures. To enhance the system robustness, a "regular" allocation strategy is proposed that yields better resistance against cascading failures compared to all possible existing strategies. Furthermore, in view of the load redistribution feature in many physical infrastructure networks, e.g., power grids, a CPS model is developed where the threshold model and the giant connected component model are used to capture the node failures in the physical infrastructure network and the cyber network, respectively. The second thrust is centered around the information dynamics in the CPS. One speculation is that the interconnections over multiple networks can facilitate information diffusion since information propagation in one network can trigger further spread in the other network. With this insight, a theoretical framework is developed to analyze information epidemic across multiple interconnecting networks. It is shown that the conjoining among networks can dramatically speed up message diffusion. Along a different avenue, many cyber-physical systems rely on wireless networks which offer platforms for information exchanges. To optimize the QoS of wireless networks, there is a need to develop a high-throughput and low-complexity scheduling algorithm to control link dynamics. To that end, distributed link scheduling algorithms are explored for multi-hop MIMO networks and two CSMA algorithms under the continuous-time model and the discrete-time model are devised, respectively. 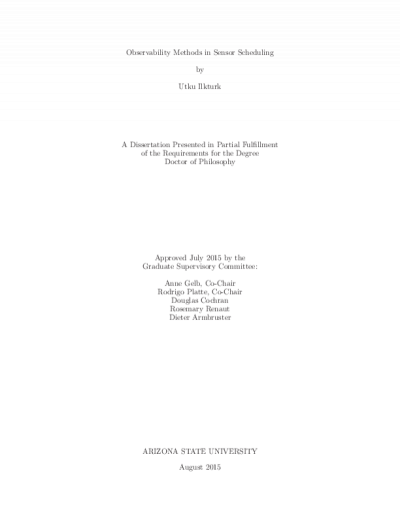 Modern measurement schemes for linear dynamical systems are typically designed so that different sensors can be scheduled to be used at each time step. To determine which sensors to use, various metrics have been suggested. One possible such metric is…

Modern measurement schemes for linear dynamical systems are typically designed so that different sensors can be scheduled to be used at each time step. To determine which sensors to use, various metrics have been suggested. One possible such metric is the observability of the system. Observability is a binary condition determining whether a finite number of measurements suffice to recover the initial state. However to employ observability for sensor scheduling, the binary definition needs to be expanded so that one can measure how observable a system is with a particular measurement scheme, i.e. one needs a metric of observability. Most methods utilizing an observability metric are about sensor selection and not for sensor scheduling. In this dissertation we present a new approach to utilize the observability for sensor scheduling by employing the condition number of the observability matrix as the metric and using column subset selection to create an algorithm to choose which sensors to use at each time step. To this end we use a rank revealing QR factorization algorithm to select sensors. Several numerical experiments are used to demonstrate the performance of the proposed scheme.