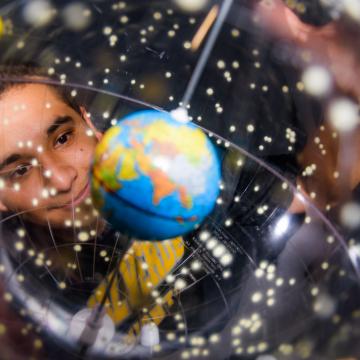 This growing collection consists of scholarly works authored by ASU-affiliated faculty, students, and community members, and it contains many open access articles. ASU-affiliated authors are encouraged to Share Your Work in KEEP. 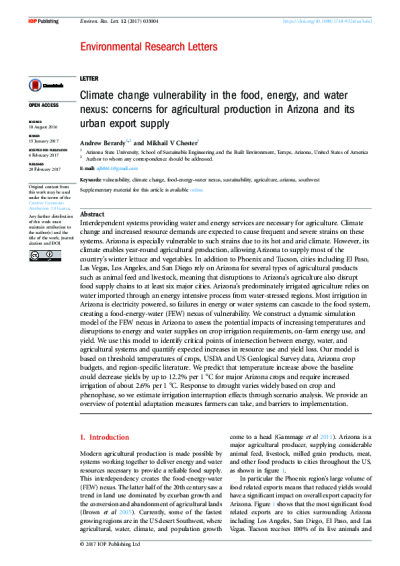 Climate Change Vulnerability in the Food, Energy, and Water Nexus: Concerns for Agricultural Production in Arizona and its Urban Export Supply

Interdependent systems providing water and energy services are necessary for agriculture. Climate change and increased resource demands are expected to cause frequent and severe strains on these systems. Arizona is…

Interdependent systems providing water and energy services are necessary for agriculture. Climate change and increased resource demands are expected to cause frequent and severe strains on these systems. Arizona is especially vulnerable to such strains due to its hot and arid climate. However, its climate enables year-round agricultural production, allowing Arizona to supply most of the country's winter lettuce and vegetables. In addition to Phoenix and Tucson, cities including El Paso, Las Vegas, Los Angeles, and San Diego rely on Arizona for several types of agricultural products such as animal feed and livestock, meaning that disruptions to Arizona's agriculture also disrupt food supply chains to at least six major cities.

Arizona's predominately irrigated agriculture relies on water imported through an energy intensive process from water-stressed regions. Most irrigation in Arizona is electricity powered, so failures in energy or water systems can cascade to the food system, creating a food-energy-water (FEW) nexus of vulnerability. We construct a dynamic simulation model of the FEW nexus in Arizona to assess the potential impacts of increasing temperatures and disruptions to energy and water supplies on crop irrigation requirements, on-farm energy use, and yield.

We use this model to identify critical points of intersection between energy, water, and agricultural systems and quantify expected increases in resource use and yield loss. Our model is based on threshold temperatures of crops, USDA and US Geological Survey data, Arizona crop budgets, and region-specific literature. We predict that temperature increase above the baseline could decrease yields by up to 12.2% per 1 °C for major Arizona crops and require increased irrigation of about 2.6% per 1 °C. Response to drought varies widely based on crop and phenophase, so we estimate irrigation interruption effects through scenario analysis. We provide an overview of potential adaptation measures farmers can take, and barriers to implementation.