Cycles of demographic and organizational change are well documented in Neolithic societies, but the social and ecological processes underlying them are debated. Such periodicities are implicit in the “Pecos classification,”…

Cycles of demographic and organizational change are well documented in Neolithic societies, but the social and ecological processes underlying them are debated. Such periodicities are implicit in the “Pecos classification,” a chronology for the pre-Hispanic U.S. Southwest introduced in Science in 1927 which is still widely used. To understand these periodicities, we analyzed 29,311 archaeological tree-ring dates from A.D. 500 to 1400 in the context of a novel high spatial resolution, annual reconstruction of the maize dry-farming niche for this same period. We argue that each of the Pecos periods initially incorporates an “exploration” phase, followed by a phase of “exploitation” of niches that are simultaneously ecological, cultural, and organizational. Exploitation phases characterized by demographic expansion and aggregation ended with climatically driven downturns in agricultural favorability, undermining important bases for social consensus. Exploration phases were times of socio-ecological niche discovery and development. 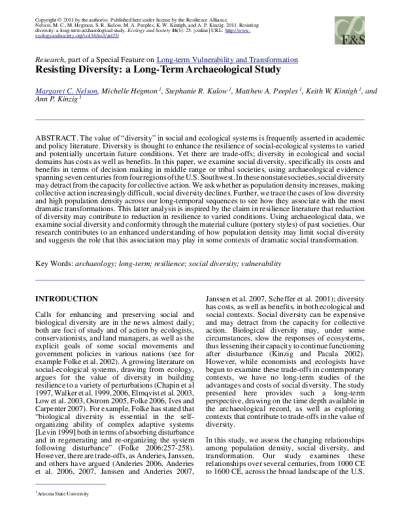 The value of “diversity” in social and ecological systems is frequently asserted in academic and policy literature. Diversity is thought to enhance the resilience of social-ecological systems to varied and potentially uncertain future conditions. Yet there are trade-offs; diversity in ecological and social domains has costs as well as benefits. In this paper, we examine social diversity, specifically its costs and benefits in terms of decision making in middle range or tribal societies, using archaeological evidence spanning seven centuries from four regions of the U.S. Southwest. In these nonstate societies, social diversity may detract from the capacity for collective action. We ask whether as population density increases, making collective action increasingly difficult, social diversity declines. Further, we trace the cases of low diversity and high population density across our long-temporal sequences to see how they associate with the most dramatic transformations. This latter analysis is inspired by the claim in resilience literature that reduction of diversity may contribute to reduction in resilience to varied conditions. Using archaeological data, we examine social diversity and conformity through the material culture (pottery styles) of past societies. Our research contributes to an enhanced understanding of how population density may limit social diversity and suggests the role that this association may play in some contexts of dramatic social transformation. 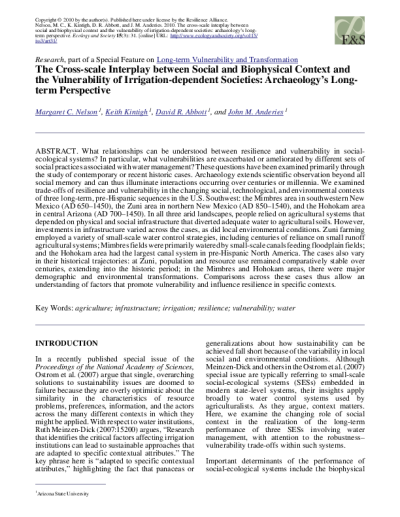 The Cross-scale Interplay between Social and Biophysical Context and the Vulnerability of Irrigation-dependent Societies: Archaeology’s Long-term Perspective

What relationships can be understood between resilience and vulnerability in social-ecological systems? In particular, what vulnerabilities are exacerbated or ameliorated by different sets of social practices associated with water management?…

What relationships can be understood between resilience and vulnerability in social-ecological systems? In particular, what vulnerabilities are exacerbated or ameliorated by different sets of social practices associated with water management? These questions have been examined primarily through the study of contemporary or recent historic cases. Archaeology extends scientific observation beyond all social memory and can thus illuminate interactions occurring over centuries or millennia. We examined trade-offs of resilience and vulnerability in the changing social, technological, and environmental contexts of three long-term, pre-Hispanic sequences in the U.S. Southwest: the Mimbres area in southwestern New Mexico (AD 650–1450), the Zuni area in northern New Mexico (AD 850–1540), and the Hohokam area in central Arizona (AD 700–1450). In all three arid landscapes, people relied on agricultural systems that depended on physical and social infrastructure that diverted adequate water to agricultural soils. However, investments in infrastructure varied across the cases, as did local environmental conditions. Zuni farming employed a variety of small-scale water control strategies, including centuries of reliance on small runoff agricultural systems; Mimbres fields were primarily watered by small-scale canals feeding floodplain fields; and the Hohokam area had the largest canal system in pre-Hispanic North America. The cases also vary in their historical trajectories: at Zuni, population and resource use remained comparatively stable over centuries, extending into the historic period; in the Mimbres and Hohokam areas, there were major demographic and environmental transformations. Comparisons across these cases thus allow an understanding of factors that promote vulnerability and influence resilience in specific contexts.

Toward a Theory of Social Stability: Investigating Relationships Among the Valencian Bronze Age Peoples of Mediterranean Iberia

What causes social systems to resist change? Studies of the emergence of social complexity in archaeology have focused primarily on drivers of change with much less emphasis on drivers of…

What causes social systems to resist change? Studies of the emergence of social complexity in archaeology have focused primarily on drivers of change with much less emphasis on drivers of stability. Social stability, or the persistence of social systems, is an essential feature without which human society is not possible. By combining quantitative modeling (Exponential Random Graph Modeling) and the comparative archaeological record where the social system is represented by networks of relations between settlements, this research tests several hypotheses about social and geographic drivers of social stability with an explicit focus on a better understanding of contexts and processes that resist change. The Valencian Bronze Age in eastern Spain along the Mediterranean, where prior research appears to indicate little, regional social change for 700 years, serves as a case study.

The results suggest that social stability depends on a society’s ability to integrate change and promote interdependency. In part, this ability is constrained or promoted by social structure and the different, relationship dependencies among individuals that lead to a particular social structure. Four elements are important to constraining or promoting social stability—structural cohesion, transitivity and social dependency, geographic isolation, and types of exchange. Through the framework provided in this research, an archaeologist can recognize patterns in the archaeological data that reflect and promote social stability, or lead to collapse.