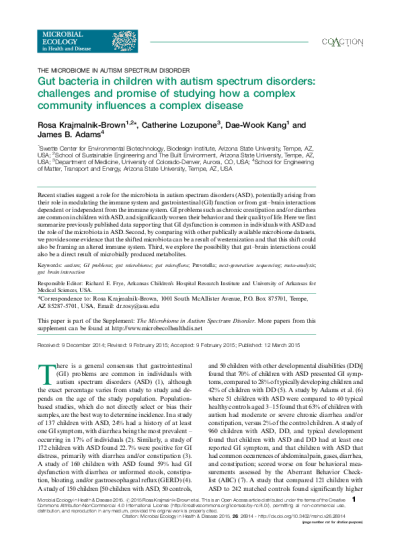 Gut bacteria in children with autism spectrum disorders: challenges and promise of studying how a complex community influences a complex disease

Recent studies suggest a role for the microbiota in autism spectrum disorders (ASD), potentially arising from their role in modulating the immune system and gastrointestinal (GI) function or from gut–brain…

Recent studies suggest a role for the microbiota in autism spectrum disorders (ASD), potentially arising from their role in modulating the immune system and gastrointestinal (GI) function or from gut–brain interactions dependent or independent from the immune system. GI problems such as chronic constipation and/or diarrhea are common in children with ASD, and significantly worsen their behavior and their quality of life. Here we first summarize previously published data supporting that GI dysfunction is common in individuals with ASD and the role of the microbiota in ASD. Second, by comparing with other publically available microbiome datasets, we provide some evidence that the shifted microbiota can be a result of westernization and that this shift could also be framing an altered immune system. Third, we explore the possibility that gut–brain interactions could also be a direct result of microbially produced metabolites. 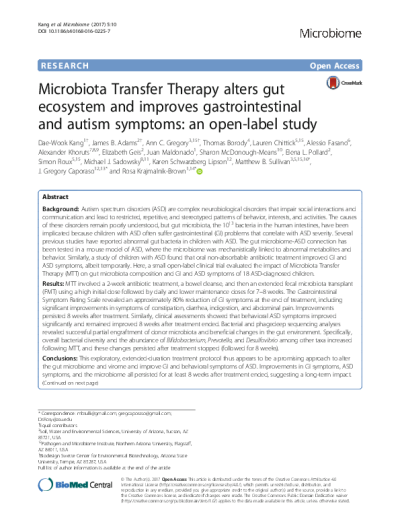 Background
Autism spectrum disorders (ASD) are complex neurobiological disorders that impair social interactions and communication and lead to restricted, repetitive, and stereotyped patterns of behavior, interests, and activities. The causes…

Background
Autism spectrum disorders (ASD) are complex neurobiological disorders that impair social interactions and communication and lead to restricted, repetitive, and stereotyped patterns of behavior, interests, and activities. The causes of these disorders remain poorly understood, but gut microbiota, the 1013 bacteria in the human intestines, have been implicated because children with ASD often suffer gastrointestinal (GI) problems that correlate with ASD severity. Several previous studies have reported abnormal gut bacteria in children with ASD. The gut microbiome-ASD connection has been tested in a mouse model of ASD, where the microbiome was mechanistically linked to abnormal metabolites and behavior. Similarly, a study of children with ASD found that oral non-absorbable antibiotic treatment improved GI and ASD symptoms, albeit temporarily. Here, a small open-label clinical trial evaluated the impact of Microbiota Transfer Therapy (MTT) on gut microbiota composition and GI and ASD symptoms of 18 ASD-diagnosed children.
Results
MTT involved a 2-week antibiotic treatment, a bowel cleanse, and then an extended fecal microbiota transplant (FMT) using a high initial dose followed by daily and lower maintenance doses for 7–8 weeks. The Gastrointestinal Symptom Rating Scale revealed an approximately 80% reduction of GI symptoms at the end of treatment, including significant improvements in symptoms of constipation, diarrhea, indigestion, and abdominal pain. Improvements persisted 8 weeks after treatment. Similarly, clinical assessments showed that behavioral ASD symptoms improved significantly and remained improved 8 weeks after treatment ended. Bacterial and phagedeep sequencing analyses revealed successful partial engraftment of donor microbiota and beneficial changes in the gut environment. Specifically, overall bacterial diversity and the abundance of Bifidobacterium, Prevotella, and Desulfovibrio among other taxa increased following MTT, and these changes persisted after treatment stopped (followed for 8 weeks).
Conclusions
This exploratory, extended-duration treatment protocol thus appears to be a promising approach to alter the gut microbiome and virome and improve GI and behavioral symptoms of ASD. Improvements in GI symptoms, ASD symptoms, and the microbiome all persisted for at least 8 weeks after treatment ended, suggesting a long-term impact. 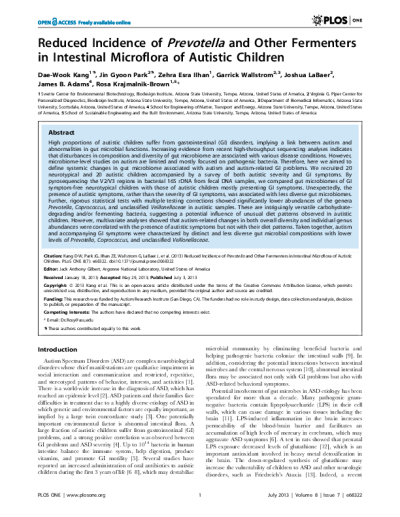 High proportions of autistic children suffer from gastrointestinal (GI) disorders, implying a link between autism and abnormalities in gut microbial functions. Increasing evidence from recent high-throughput sequencing analyses indicates that disturbances in composition and diversity of gut microbiome are associated with various disease conditions. However, microbiome-level studies on autism are limited and mostly focused on pathogenic bacteria. Therefore, here we aimed to define systemic changes in gut microbiome associated with autism and autism-related GI problems. We recruited 20 neurotypical and 20 autistic children accompanied by a survey of both autistic severity and GI symptoms. By pyrosequencing the V2/V3 regions in bacterial 16S rDNA from fecal DNA samples, we compared gut microbiomes of GI symptom-free neurotypical children with those of autistic children mostly presenting GI symptoms. Unexpectedly, the presence of autistic symptoms, rather than the severity of GI symptoms, was associated with less diverse gut microbiomes. Further, rigorous statistical tests with multiple testing corrections showed significantly lower abundances of the genera Prevotella, Coprococcus, and unclassified Veillonellaceae in autistic samples. These are intriguingly versatile carbohydrate-degrading and/or fermenting bacteria, suggesting a potential influence of unusual diet patterns observed in autistic children. However, multivariate analyses showed that autism-related changes in both overall diversity and individual genus abundances were correlated with the presence of autistic symptoms but not with their diet patterns. Taken together, autism and accompanying GI symptoms were characterized by distinct and less diverse gut microbial compositions with lower levels of Prevotella, Coprococcus, and unclassified Veillonellaceae. 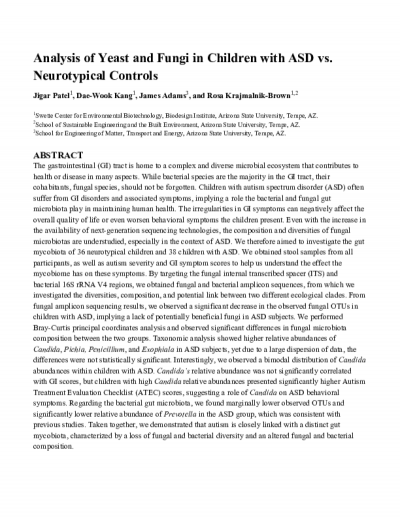 Analysis of Yeast and Fungi in Children with ASD vs. Neurotypical Controls

The gastrointestinal (GI) tract is home to a complex and diverse microbial ecosystem that contributes to health or disease in many aspects. While bacterial species are the majority in the…

The gastrointestinal (GI) tract is home to a complex and diverse microbial ecosystem that contributes to health or disease in many aspects. While bacterial species are the majority in the GI tract, their cohabitants, fungal species, should not be forgotten. Children with autism spectrum disorder (ASD) often suffer from GI disorders and associated symptoms, implying a role the bacterial and fungal gut microbiota play in maintaining human health. The irregularities in GI symptoms can negatively affect the overall quality of life or even worsen behavioral symptoms the children present. Even with the increase in the availability of next-generation sequencing technologies, the composition and diversities of fungal microbiotas are understudied, especially in the context of ASD. We therefore aimed to investigate the gut mycobiota of 36 neurotypical children and 38 children with ASD. We obtained stool samples from all participants, as well as autism severity and GI symptom scores to help us understand the effect the mycobiome has on these symptoms. By targeting the fungal internal transcribed spacer (ITS) and bacterial 16S rRNA V4 regions, we obtained fungal and bacterial amplicon sequences, from which we investigated the diversities, composition, and potential link between two different ecological clades. From fungal amplicon sequencing results, we observed a significant decrease in the observed fungal OTUs in children with ASD, implying a lack of potentially beneficial fungi in ASD subjects. We performed Bray-Curtis principal coordinates analysis and observed significant differences in fungal microbiota composition between the two groups. Taxonomic analysis showed higher relative abundances of Candida , Pichia, Penicillium , and Exophiala in ASD subjects, yet due to a large dispersion of data, the differences were not statistically significant. Interestingly, we observed a bimodal distribution of Candida abundances within children with ASD. Candida's relative abundance was not significantly correlated with GI scores, but children with high Candida relative abundances presented significantly higher Autism Treatment Evaluation Checklist (ATEC) scores, suggesting a role of Candida on ASD behavioral symptoms. Regarding the bacterial gut microbiota, we found marginally lower observed OTUs and significantly lower relative abundance of Prevotella in the ASD group, which was consistent with previous studies. Taken together, we demonstrated that autism is closely linked with a distinct gut mycobiota, characterized by a loss of fungal and bacterial diversity and an altered fungal and bacterial composition.