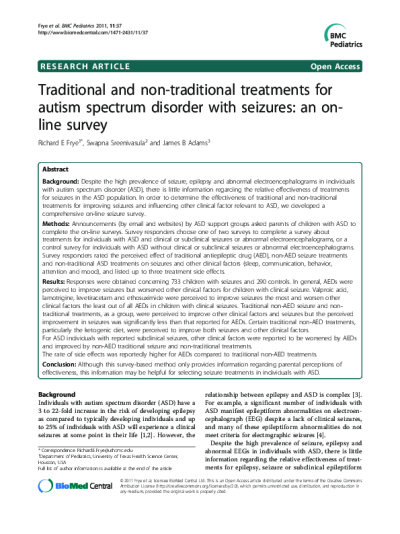 Traditional and Non-Traditional Treatments for Autism Spectrum Disorder With Seizures: An On-Line Survey

Background: Despite the high prevalence of seizure, epilepsy and abnormal electroencephalograms in individuals with autism spectrum disorder (ASD), there is little information regarding the relative effectiveness of treatments for seizures in the ASD population. In order to determine the effectiveness of…

Background: Despite the high prevalence of seizure, epilepsy and abnormal electroencephalograms in individuals with autism spectrum disorder (ASD), there is little information regarding the relative effectiveness of treatments for seizures in the ASD population. In order to determine the effectiveness of traditional and non-traditional treatments for improving seizures and influencing other clinical factor relevant to ASD, we developed a comprehensive on-line seizure survey.

Methods: Announcements (by email and websites) by ASD support groups asked parents of children with ASD to complete the on-line surveys. Survey responders choose one of two surveys to complete: a survey about treatments for individuals with ASD and clinical or subclinical seizures or abnormal electroencephalograms, or a control survey for individuals with ASD without clinical or subclinical seizures or abnormal electroencephalograms. Survey responders rated the perceived effect of traditional antiepileptic drug (AED), non-AED seizure treatments and non-traditional ASD treatments on seizures and other clinical factors (sleep, communication, behavior, attention and mood), and listed up to three treatment side effects.

Conclusion: Although this survey-based method only provides information regarding parental perceptions of effectiveness, this information may be helpful for selecting seizure treatments in individuals with ASD.

Contributors
Agent
Created
Date Created
The date the item was original created (prior to any relationship with the ASU Digital Repositories.)
2011-05-18 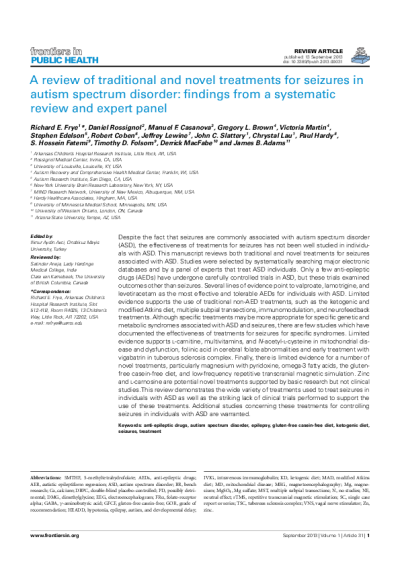 A Review of Traditional and Novel Treatments for Seizures in Autism Spectrum Disorder: Findings From a Systematic Review and Expert Panel

Contributors
Agent
Created
Date Created
The date the item was original created (prior to any relationship with the ASU Digital Repositories.)
2013-09-13 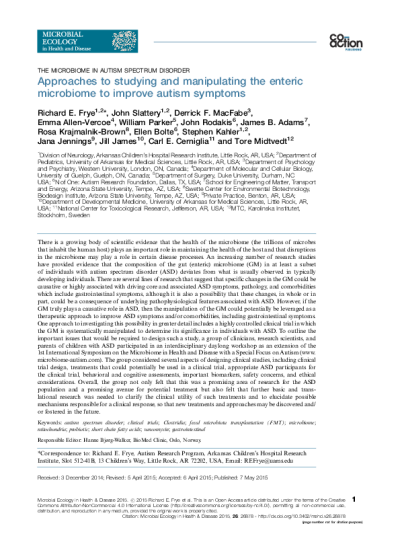 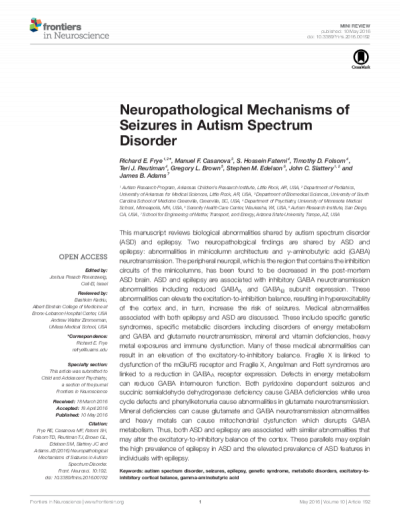 This manuscript reviews biological abnormalities shared by autism spectrum disorder (ASD) and epilepsy. Two neuropathological findings are shared by ASD and epilepsy: abnormalities in minicolumn architecture and γ-aminobutyric acid (GABA) neurotransmission. The peripheral neuropil, which is the region that contains…

This manuscript reviews biological abnormalities shared by autism spectrum disorder (ASD) and epilepsy. Two neuropathological findings are shared by ASD and epilepsy: abnormalities in minicolumn architecture and γ-aminobutyric acid (GABA) neurotransmission. The peripheral neuropil, which is the region that contains the inhibition circuits of the minicolumns, has been found to be decreased in the post-mortem ASD brain. ASD and epilepsy are associated with inhibitory GABA neurotransmission abnormalities including reduced GABAA and GABAB subunit expression. These abnormalities can elevate the excitation-to-inhibition balance, resulting in hyperexcitablity of the cortex and, in turn, increase the risk of seizures. Medical abnormalities associated with both epilepsy and ASD are discussed. These include specific genetic syndromes, specific metabolic disorders including disorders of energy metabolism and GABA and glutamate neurotransmission, mineral and vitamin deficiencies, heavy metal exposures and immune dysfunction. Many of these medical abnormalities can result in an elevation of the excitatory-to-inhibitory balance. Fragile X is linked to dysfunction of the mGluR5 receptor and Fragile X, Angelman and Rett syndromes are linked to a reduction in GABA[subscript A] receptor expression. Defects in energy metabolism can reduce GABA interneuron function. Both pyridoxine dependent seizures and succinic semialdehyde dehydrogenase deficiency cause GABA deficiencies while urea cycle defects and phenylketonuria cause abnormalities in glutamate neurotransmission. Mineral deficiencies can cause glutamate and GABA neurotransmission abnormalities and heavy metals can cause mitochondrial dysfunction which disrupts GABA metabolism. Thus, both ASD and epilepsy are associated with similar abnormalities that may alter the excitatory-to-inhibitory balance of the cortex. These parallels may explain the high prevalence of epilepsy in ASD and the elevated prevalence of ASD features in individuals with epilepsy.

Contributors
Agent
Created
Date Created
The date the item was original created (prior to any relationship with the ASU Digital Repositories.)
2016-05-10