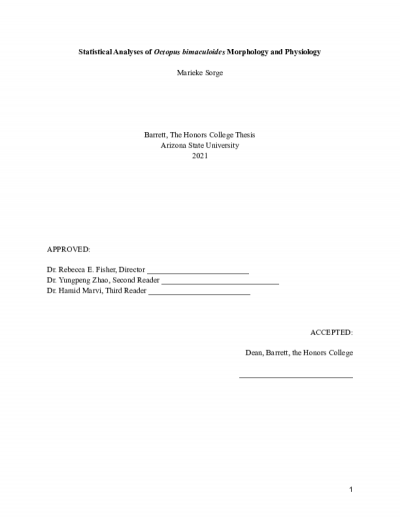 Chapter 1: Functional Specialization and Arm Length in Octopus bimaculoides<br/>Although studies are limited, there is some evidence that octopuses use their arms for specialized functions. For example, in Octopus maya…

Chapter 1: Functional Specialization and Arm Length in Octopus bimaculoides<br/>Although studies are limited, there is some evidence that octopuses use their arms for specialized functions. For example, in Octopus maya and O. vulgaris, the anterior arms are utilized more frequently for grasping and exploring (Lee, 1992; Byrne et al., 2006a), while posterior arms are more frequently utilized for crawling in O. vulgaris (Levy et al., 2015). In addition, O. vulgaris uses favored arms when retrieving food and making contact with a T-maze as dictated by their lateralized vision (Byrne, 2006b). O. vulgaris also demonstrates a preference for anterior arms when retrieving food from a Y-maze (Gutnick et. al. 2020). In Octopus bimaculoides bending and elongation were more frequent in anterior arms than posterior arms during reaching and grasping tasks, and right arms displayed deformation more frequently than left arms, with the exception of the hectocotylus (R3) in males (Kennedy et. al. 2020). Given these observed functional differences, the goal of this study was to determine if morphological differences exist between different octopus arm identities, coded as L1-L4 and R1-R4. In particular, the relationship between arm length and arm identity was analyzed statistically. The dataset included 111 intact arms from 22 wild-caught specimens of O. bimaculoides (11 male and 11 female). Simple linear regressions and an analysis of covariance were performed to test the relationship between arm length and a number of factors, including body mass, sex, anterior versus posterior location, and left versus the right side. Mass had a significant linear relationship with arm length and a one-way ANOVA demonstrated that arm identity is significantly correlated with arm length. Moreover, an analysis of covariance demonstrated that independent of mass, arm identity has a significant linear relationship with arm length. Despite an overall appearance of bilateral symmetry, arms of different identities do not have statistically equivalent lengths in O. bimaculoides. Furthermore, differences in arm length do not appear to be related to sex, anterior versus posterior location, or left or right side. These results call into question the existing practice of treating all arms as equivalent by either using a single-arm measurement as representative of all eight or calculating an average length and suggest that morphological analyses of specific arm identities may be more informative.<br/><br/>Chapter 2: Predicting and Analyzing Octopus bimaculoides Sensitivity to Global Anesthetic<br/>Although global anesthetic is widely used in human and veterinary medicine the mechanism and impact of global anesthetic is relatively poorly comprehended, even in well-studied mammalian models. Invertebrate anesthetic is even less understood. In order to evaluate factors that impact anesthetic effectiveness analyses were conducted on 22 wild-caught specimens of Octopus bimaculoides during 72 anesthetic events.Three machine learning models: regression tree, random forest, and generalized additive model were utilized to make predictions of the concentration of anesthetic (percent ethanol by volume) from 11 features and to determine feature importance in making those predictions. The fit of each model was analyzed on three criteria: correlation coefficient, mean squared error, and relative error. Feature importance was determined in a model-specific manner. Predictions from the best performing model, random forest, have a .82 correlation coefficient with experimental values. Feature importance suggests that temperature on arrival and cohabitation factors strongly influence predictions for anesthesia concentration. This likely indicates the transportation process was incurring stress on the animals and that cohabitation was also stressful for the typically solitary O. bimaculoides. This long-term stress could lead to a decline in the animal’s well-being and a lower necessary ethanol concentration (Horvath et al., 2013). This analysis provides information to improve the care of octopus in laboratory settings and furthers the understanding of the effects of global anesthetic in invertebrates, particularly one with a distributed nervous system.