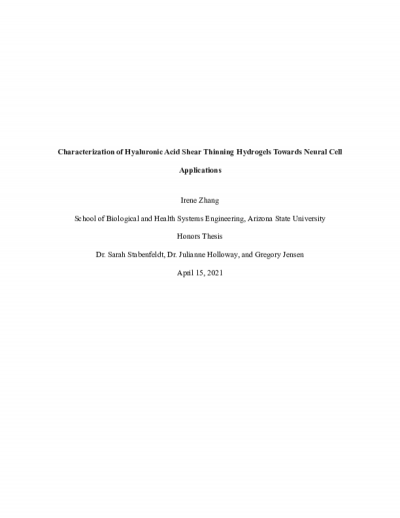 Traumatic brain injury (TBI) is a widespread health issue that affects approximately 1.7 million lives per year. The effects of TBI go past the incident of primary injury, as chronic…

Traumatic brain injury (TBI) is a widespread health issue that affects approximately 1.7 million lives per year. The effects of TBI go past the incident of primary injury, as chronic damage can follow for years and cause irreversible neurodegeneration. A potential strategy for repair that has been studied is cell transplantation, as neural stem cells improve neurological function. While promising, neural stem cell transplantation presents challenges due to a relatively low survival rate post-implantation and issues with determining the optimal method of transplantation. Shear-thinning hydrogels are a type of hydrogel whose linkages break when under shear stress, exhibiting viscous flow, but reform and recover upon relaxation. Such properties allow them to be easily injected for minimally invasive delivery, while also shielding encapsulated cells from high shear forces, which would normally degrade the function and viability of such cells. As such, it is salient to research whether shear-thinning hydrogels are feasible candidates in neural cell transplantation applications for neuroregenerative medicine. In this honors thesis, shear-thinning hydrogels were formed through guest-host interactions of adamantane modified HA (guest ad-HA) and beta-cyclodextrin modified HA (host CD-HA). The purpose of the study was to characterize the injection force profile of different weight percentages of the HA shear-thinning hydrogel. The break force and average glide force were also compared between the differing weight percentages. By understanding the force exerted on the hydrogel when being injected, we could characterize how neural cells may respond to encapsulation and injection within HA shear-thinning hydrogels. We identified that 5% weight HA hydrogel required greater injection force than 4% weight HA hydrogel to be fully delivered. Such contexts are valuable, as this implies that higher weight percentage gels impart higher shear forces on encapsulated cells than lower weight gels. Further study is required to optimize our injection force system’s sensitivity and to investigate if cell encapsulation increases the force required for injection.