Single-cell studies of phenotypic heterogeneity reveal more information about pathogenic processes than conventional bulk-cell analysis methods. By enabling high-resolution structural and functional imaging, a single-cell three-dimensional (3D) imaging system can be used to study basic biological processes and to diagnose diseases such as cancer at an early stage. One mechanism that such systems apply to accomplish 3D imaging is rotation of a single cell about a fixed axis. However, many cell rotation mechanisms require intricate and tedious microfabrication, or fail to provide a suitable environment for living cells. To address these and related challenges, we applied numerical simulation methods to design new microfluidic chambers capable of generating fluidic microvortices to rotate suspended cells. We then compared several microfluidic chip designs experimentally in terms of: (1) their ability to rotate biological cells in a stable and precise manner; and (2) their suitability, from a geometric standpoint, for microscopic cell imaging. We selected a design that incorporates a trapezoidal side chamber connected to a main flow channel because it provided well-controlled circulation and met imaging requirements. Micro particle-image velocimetry (micro-PIV) was used to provide a detailed characterization of flows in the new design. Simulated and experimental results demonstrate that a trapezoidal side chamber represents a viable option for accomplishing controlled single cell rotation. Further, agreement between experimental and simulated results confirms that numerical simulation is an effective method for chamber design. Hydrophobic platinum(II)-5,10,15,20-tetrakis-(2,3,4,5,6-pentafluorophenyl)-porphyrin (PtTFPP) was physically incorporated into micelles formed from poly(ε-caprolactone)-block-poly(ethylene glycol) to enable the application of PtTFPP in aqueous solution. Micelles were characterized using dynamic light scattering (DLS) and…

Hydrophobic platinum(II)-5,10,15,20-tetrakis-(2,3,4,5,6-pentafluorophenyl)-porphyrin (PtTFPP) was physically incorporated into micelles formed from poly(ε-caprolactone)-block-poly(ethylene glycol) to enable the application of PtTFPP in aqueous solution. Micelles were characterized using dynamic light scattering (DLS) and atomic force microscopy (AFM) to show an average diameter of about 140 nm. PtTFPP showed higher quantum efficiency in micellar solution than in tetrahydrofuran (THF) and dichloromethane (CH[subscript 2]Cl[subscript 2]). PtTFPP in micelles also exhibited higher photostability than that of PtTFPP suspended in water. PtTFPP in micelles exhibited good oxygen sensitivity and response time. This study provided an efficient approach to enable the application of hydrophobic oxygen sensors in a biological environment. A general strategy for expanding polymerase function by droplet microfluidics

Polymerases that synthesize artificial genetic polymers hold great promise for advancing future applications in synthetic biology. However, engineering natural polymerases to replicate unnatural genetic polymers is a challenging problem. Here we present droplet-based optical polymerase sorting (DrOPS) as a general strategy for expanding polymerase function that employs an optical sensor to monitor polymerase activity inside the microenvironment of a uniform synthetic compartment generated by microfluidics. We validated this approach by performing a complete cycle of encapsulation, sorting and recovery on a doped library and observed an enrichment of ∼1,200-fold for a model engineered polymerase. We then applied our method to evolve a manganese-independent α-L-threofuranosyl nucleic acid (TNA) polymerase that functions with >99% template-copying fidelity. Based on our findings, we suggest that DrOPS is a versatile tool that could be used to evolve any polymerase function, where optical detection can be achieved by Watson–Crick base pairing. 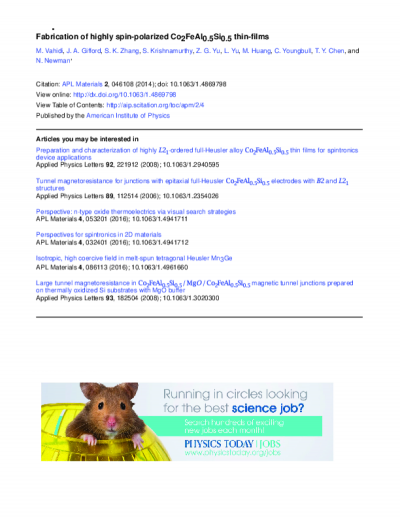 Ferromagnetic Heusler Co[subscript 2]FeAl[subscript 0.5]Si[subscript 0.5] epitaxial thin-films have been fabricated in the L2[subscript 1] structure with saturation magnetizations over 1200 emu/cm[superscript 3]. Andreev reflection measurements show that the spin…

Ferromagnetic Heusler Co[subscript 2]FeAl[subscript 0.5]Si[subscript 0.5] epitaxial thin-films have been fabricated in the L2[subscript 1] structure with saturation magnetizations over 1200 emu/cm[superscript 3]. Andreev reflection measurements show that the spin polarization is as high as 80% in samples sputtered on unheated MgO (100) substrates and annealed at high temperatures. However, the spin polarization is considerably smaller in samples deposited on heated substrates. As the need for data concerning the health of the world's oceans increases, it becomes necessary to develop large, networked communication systems underwater. This research involves the development of an…

As the need for data concerning the health of the world's oceans increases, it becomes necessary to develop large, networked communication systems underwater. This research involves the development of an embedded operating system that is suited for optically-linked underwater wireless sensor networks (WSNs). Optical WSNs are unique in that large sums of data may be received relatively infrequently, and so an operating system for each node must be very responsive. Additionally, the volatile nature of the underwater environment means that the operating system must be accurate, while still maintaining a low profile on a relatively small microprocessor core. The first part of this research concerns the actual implementation of the operating system's task scheduler and additional libraries to maintain synchronization, and the second part involves testing the operating system for responsiveness to interrupts and overall performance. There has been a vast increase in applications of Unmanned Aerial Vehicles (UAVs) in civilian domains. To operate in the civilian airspace, a UAV must be able to sense and…

There has been a vast increase in applications of Unmanned Aerial Vehicles (UAVs) in civilian domains. To operate in the civilian airspace, a UAV must be able to sense and avoid both static and moving obstacles for flight safety. While indoor and low-altitude environments are mainly occupied by static obstacles, risks in space of higher altitude primarily come from moving obstacles such as other aircraft or flying vehicles in the airspace. Therefore, the ability to avoid moving obstacles becomes a necessity

Towards enabling a UAV to autonomously sense and avoid moving obstacles, this thesis makes the following contributions. Initially, an image-based reactive motion planner is developed for a quadrotor to avoid a fast approaching obstacle. Furthermore, A Dubin’s curve based geometry method is developed as a global path planner for a fixed-wing UAV to avoid collisions with aircraft. The image-based method is unable to produce an optimal path and the geometry method uses a simplified UAV model. To compensate

these two disadvantages, a series of algorithms built upon the Closed-Loop Rapid Exploratory Random Tree are developed as global path planners to generate collision avoidance paths in real time. The algorithms are validated in Software-In-the-Loop (SITL) and Hardware-In-the-Loop (HIL) simulations using a fixed-wing UAV model and in real flight experiments using quadrotors. It is observed that the algorithm enables a UAV to avoid moving obstacles approaching to it with different directions and speeds. Continuous monitoring in the adequate temporal and spatial scale is necessary for a better understanding of environmental variations. But field deployments of molecular biological analysis platforms in that scale are…

Continuous monitoring in the adequate temporal and spatial scale is necessary for a better understanding of environmental variations. But field deployments of molecular biological analysis platforms in that scale are currently hindered because of issues with power, throughput and automation. Currently, such analysis is performed by the collection of large sample volumes from over a wide area and transporting them to laboratory testing facilities, which fail to provide any real-time information. This dissertation evaluates the systems currently utilized for in-situ field analyses and the issues hampering the successful deployment of such bioanalytial instruments for environmental applications. The design and development of high throughput, low power, and autonomous Polymerase Chain Reaction (PCR) instruments, amenable for portable field operations capable of providing quantitative results is presented here as part of this dissertation. A number of novel innovations have been reported here as part of this work in microfluidic design, PCR thermocycler design, optical design and systems integration. Emulsion microfluidics in conjunction with fluorinated oils and Teflon tubing have been used for the fluidic module that reduces cross-contamination eliminating the need for disposable components or constant cleaning. A cylindrical heater has been designed with the tubing wrapped around fixed temperature zones enabling continuous operation. Fluorescence excitation and detection have been achieved by using a light emitting diode (LED) as the excitation source and a photomultiplier tube (PMT) as the detector. Real-time quantitative PCR results were obtained by using multi-channel fluorescence excitation and detection using LED, optical fibers and a 64-channel multi-anode PMT for measuring continuous real-time fluorescence. The instrument was evaluated by comparing the results obtained with those obtained from a commercial instrument and found to be comparable. To further improve the design and enhance its field portability, this dissertation also presents a framework for the instrumentation necessary for a portable digital PCR platform to achieve higher throughputs with lower power. Both systems were designed such that it can easily couple with any upstream platform capable of providing nucleic acid for analysis using standard fluidic connections. Consequently, these instruments can be used not only in environmental applications, but portable diagnostics applications as well.