Recently, near-field thermal radiation has attracted much attention in several fields since it can exceed the Planck blackbody limit through the coupling of evanescent waves. In this work, near-field radiative…

Recently, near-field thermal radiation has attracted much attention in several fields since it can exceed the Planck blackbody limit through the coupling of evanescent waves. In this work, near-field radiative heat transfer between two semi-infinite dual uniaxial electromagnetic metamaterials with two different material property sets is theoretically analyzed. The near-field radiative heat transfer is calculated using fluctuational electrodynamics incorporated with anisotropic wave optics. The underlying mechanisms, namely, magnetic hyperbolic mode, magnetic surface polariton, electrical hyperbolic mode, and electrical surface polariton, between two homogeneous dual uniaxial electromagnetic metamaterials are investigated by examining the transmission coefficient and the spectral heat flux. The effect of vacuum gap distance is also studied, which shows that the enhancement at smaller vacuum gap is mainly due to hyperbolic mode and surface plasmon polariton modes. In addition, the results show that the contribution of s-polarized waves is significant and should not be excluded due to the strong magnetic response regardless of vacuum gap distances. The fundamental understanding and insights obtained here will facilitate the finding and application of novel materials for near-field thermal radiation. 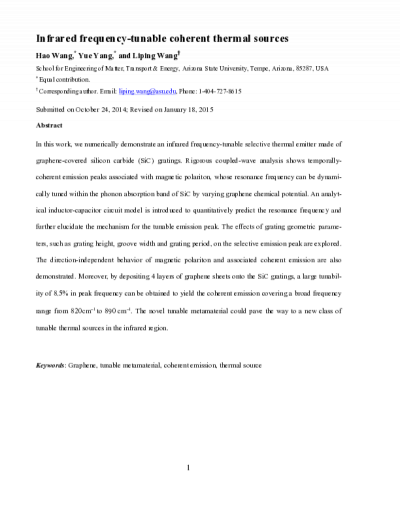 In this work, we numerically demonstrate an infrared (IR) frequency-tunable selective thermal emitter made of graphene-covered silicon carbide (SiC) gratings. Rigorous coupled-wave analysis shows temporally-coherent emission peaks associated with magnetic polariton (MP), whose resonance frequency can be dynamically tuned within the phonon absorption band of SiC by varying graphene chemical potential. An analytical inductor–capacitor circuit model is introduced to quantitatively predict the resonance frequency and further elucidate the mechanism for the tunable emission peak. The effects of grating geometric parameters, such as grating height, groove width and grating period, on the selective emission peak are explored. The direction-independent behavior of MP and associated coherent emission are also demonstrated. Moreover, by depositing four layers of graphene sheets onto the SiC gratings, a large tunability of 8.5% in peak frequency can be obtained to yield the coherent emission covering a broad frequency range from 820 to 890 cm[superscript −1]. The novel tunable metamaterial could pave the way to a new class of tunable thermal sources in the IR region. 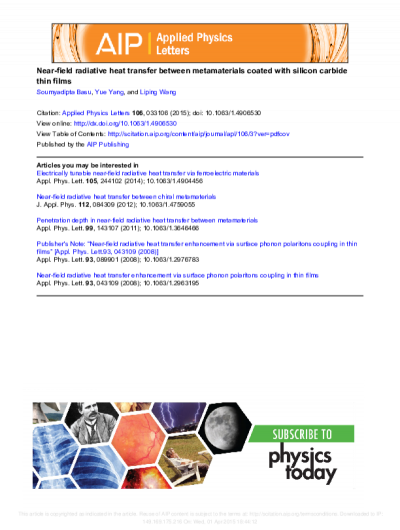 In this letter, we study the near-field radiative heat transfer between two metamaterial substrates coated with silicon carbide (SiC) thin films. It is known that metamaterials can enhance the near-field heat transfer over ordinary materials due to excitation of magnetic plasmons associated with s polarization, while strong surface phonon polariton exists for SiC. By careful tuning of the optical properties of metamaterial, it is possible to excite electrical and magnetic resonances for the metamaterial and surface phonon polaritons for SiC at different spectral regions, resulting in the enhanced heat transfer. The effect of the SiC film thickness at different vacuum gaps is investigated. Results obtained from this study will be beneficial for application of thin film coatings for energy harvesting.

In this work, we report the design of a wavelength-tunable infrared metamaterial by tailoring magnetic resonance condition with the phase transition of vanadium dioxide (VO[subscript 2]). Numerical simulation based on…

In this work, we report the design of a wavelength-tunable infrared metamaterial by tailoring magnetic resonance condition with the phase transition of vanadium dioxide (VO[subscript 2]). Numerical simulation based on the finite-difference time-domain method shows a broad absorption peak at the wavelength of 10.9 μm when VO[subscript 2] is a metal, but it shifts to 15.1 μm when VO[subscript 2] changes to dielectric phase below its phase transition temperature of 68 °C. The large tunability of 38.5% in the resonance wavelength stems from the different excitation conditions of magnetic resonance mediated by plasmon in metallic VO[subscript 2] but optical phonons in dielectric VO[subscript 2]. The physical mechanism is elucidated with the aid of electromagnetic field distribution at the resonance wavelengths. A hybrid magnetic resonance mode due to the plasmon-phonon coupling is also discussed. The results here would be beneficial for active control of thermal radiation in novel electronic, optical, and thermal devices. The proposed research mainly focuses on employing tunable materials to achieve dynamic control of radiative heat transfer in both far and near fields for thermal management. Vanadium dioxide (VO2), which…

The proposed research mainly focuses on employing tunable materials to achieve dynamic control of radiative heat transfer in both far and near fields for thermal management. Vanadium dioxide (VO2), which undergoes a phase transition from insulator to metal at the temperature of 341 K, is one tunable material being applied. The other one is graphene, whose optical properties can be tuned by chemical potential through external bias or chemical doping.

In the near field, a radiation-based thermal rectifier is constructed by investigating radiative transfer between VO2 and SiO2 separated by nanometer vacuum gap distances. Compared to the case where VO2 is set as the emitter at 400 K as a metal, when VO2 is considered as the receiver at 300 K as an insulator, the energy transfer is greatly enhanced due to the strong surface phonon polariton (SPhP) coupling between insulating VO2 and SiO2. A radiation-based thermal switch is also explored by setting VO2 as both the emitter and the receiver. When both VO2 emitter and receiver are at the insulating phase, the switch is at the “on” mode with a much enhanced heat flux due to strong SPhP coupling, while the near-field radiative transfer is greatly suppressed when the emitting VO2 becomes metallic at temperatures higher than 341K during the “off” mode. In addition, an electrically-gated thermal modulator made of graphene covered SiC plates is theoretically studied with modulated radiative transport by varying graphene chemical potential. Moreover, the MP effect on near-field radiative transport has been investigated by spectrally enhancing radiative heat transfer between two metal gratings.