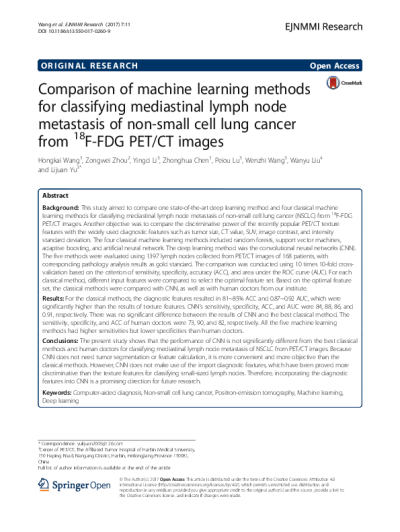 Background
This study aimed to compare one state-of-the-art deep learning method and four classical machine learning methods for classifying mediastinal lymph node metastasis of non-small cell lung cancer (NSCLC) from [superscript 18]F-FDG PET/CT images. Another objective was to compare the discriminative power of the recently popular PET/CT texture features with the widely used diagnostic features such as tumor size, CT value, SUV, image contrast, and intensity standard deviation. The four classical machine learning methods included random forests, support vector machines, adaptive boosting, and artificial neural network. The deep learning method was the convolutional neural networks (CNN). The five methods were evaluated using 1397 lymph nodes collected from PET/CT images of 168 patients, with corresponding pathology analysis results as gold standard. The comparison was conducted using 10 times 10-fold cross-validation based on the criterion of sensitivity, specificity, accuracy (ACC), and area under the ROC curve (AUC). For each classical method, different input features were compared to select the optimal feature set. Based on the optimal feature set, the classical methods were compared with CNN, as well as with human doctors from our institute.
Results
For the classical methods, the diagnostic features resulted in 81~85% ACC and 0.87~0.92 AUC, which were significantly higher than the results of texture features. CNN’s sensitivity, specificity, ACC, and AUC were 84, 88, 86, and 0.91, respectively. There was no significant difference between the results of CNN and the best classical method. The sensitivity, specificity, and ACC of human doctors were 73, 90, and 82, respectively. All the five machine learning methods had higher sensitivities but lower specificities than human doctors.
Conclusions
The present study shows that the performance of CNN is not significantly different from the best classical methods and human doctors for classifying mediastinal lymph node metastasis of NSCLC from PET/CT images. Because CNN does not need tumor segmentation or feature calculation, it is more convenient and more objective than the classical methods. However, CNN does not make use of the import diagnostic features, which have been proved more discriminative than the texture features for classifying small-sized lymph nodes. Therefore, incorporating the diagnostic features into CNN is a promising direction for future research.