We examined the effect of different soil sample sizes obtained from an agricultural field, under a single cropping system uniform in soil properties and aboveground crop responses, on bacterial and…

We examined the effect of different soil sample sizes obtained from an agricultural field, under a single cropping system uniform in soil properties and aboveground crop responses, on bacterial and fungal community structure and microbial diversity indices. DNA extracted from soil sample sizes of 0.25, 1, 5, and 10 g using MoBIO kits and from 10 and 100 g sizes using a bead-beating method (SARDI) were used as templates for high-throughput sequencing of 16S and 28S rRNA gene amplicons for bacteria and fungi, respectively, on the Illumina MiSeq and Roche 454 platforms. Sample size significantly affected overall bacterial and fungal community structure, replicate dispersion and the number of operational taxonomic units (OTUs) retrieved. Richness, evenness and diversity were also significantly affected. The largest diversity estimates were always associated with the 10 g MoBIO extractions with a corresponding reduction in replicate dispersion. For the fungal data, smaller MoBIO extractions identified more unclassified Eukaryota incertae sedis and unclassified glomeromycota while the SARDI method retrieved more abundant OTUs containing unclassified Pleosporales and the fungal genera Alternaria and Cercophora. Overall, these findings indicate that a 10 g soil DNA extraction is most suitable for both soil bacterial and fungal communities for retrieving optimal diversity while still capturing rarer taxa in concert with decreasing replicate variation. 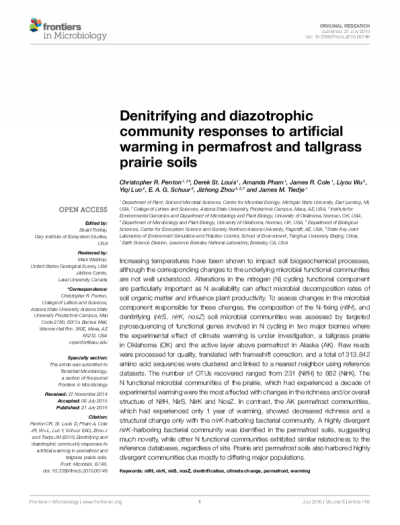 Increasing temperatures have been shown to impact soil biogeochemical processes, although the corresponding changes to the underlying microbial functional communities are not well understood. Alterations in the nitrogen (N) cycling…

Increasing temperatures have been shown to impact soil biogeochemical processes, although the corresponding changes to the underlying microbial functional communities are not well understood. Alterations in the nitrogen (N) cycling functional component are particularly important as N availability can affect microbial decomposition rates of soil organic matter and influence plant productivity. To assess changes in the microbial component responsible for these changes, the composition of the N-fixing (nifH), and denitrifying (nirS, nirK, nosZ) soil microbial communities was assessed by targeted pyrosequencing of functional genes involved in N cycling in two major biomes where the experimental effect of climate warming is under investigation, a tallgrass prairie in Oklahoma (OK) and the active layer above permafrost in Alaska (AK). Raw reads were processed for quality, translated with frameshift correction, and a total of 313,842 amino acid sequences were clustered and linked to a nearest neighbor using reference datasets. The number of OTUs recovered ranged from 231 (NifH) to 862 (NirK). The N functional microbial communities of the prairie, which had experienced a decade of experimental warming were the most affected with changes in the richness and/or overall structure of NifH, NirS, NirK and NosZ. In contrast, the AK permafrost communities, which had experienced only 1 year of warming, showed decreased richness and a structural change only with the nirK-harboring bacterial community. A highly divergent nirK-harboring bacterial community was identified in the permafrost soils, suggesting much novelty, while other N functional communities exhibited similar relatedness to the reference databases, regardless of site. Prairie and permafrost soils also harbored highly divergent communities due mostly to differing major populations. To understand patterns of geochemical cycling in pristine versus contaminated groundwater ecosystems, pristine shallow groundwater (FW301) and contaminated groundwater (FW106) samples from the Oak Ridge Integrated Field Research Center (OR-IFRC) were sequenced and compared to each other to determine phylogenetic and metabolic difference between the communities. Proteobacteria (e.g., Burkholderia, Pseudomonas) are the most abundant lineages in the pristine community, though a significant proportion ( >55%) of the community is composed of poorly characterized low abundance (individually <1%) lineages. The phylogenetic diversity of the pristine community contributed to a broader diversity of metabolic networks than the contaminated community. In addition, the pristine community encodes redundant and mostly complete geochemical cycles distributed over multiple lineages and appears capable of a wide range of metabolic activities. In contrast, many geochemical cycles in the contaminated community appear truncated or minimized due to decreased biodiversity and dominance by Rhodanobacter populations capable of surviving the combination of stresses at the site. These results indicate that the pristine site contains more robust and encodes more functional redundancy than the stressed community, which contributes to more efficient nutrient cycling and adaptability than the stressed community.