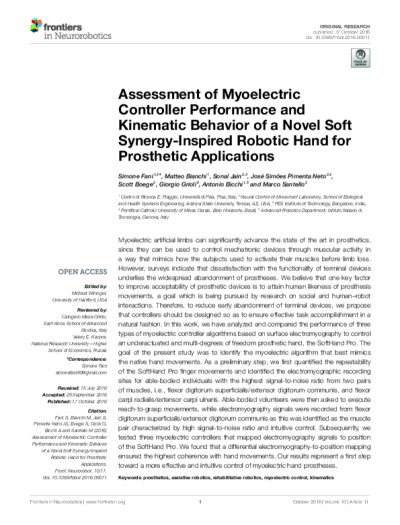 Myoelectric artificial limbs can significantly advance the state of the art in prosthetics, since they can be used to control mechatronic devices through muscular activity in a way that mimics…

Myoelectric artificial limbs can significantly advance the state of the art in prosthetics, since they can be used to control mechatronic devices through muscular activity in a way that mimics how the subjects used to activate their muscles before limb loss. However, surveys indicate that dissatisfaction with the functionality of terminal devices underlies the widespread abandonment of prostheses. We believe that one key factor to improve acceptability of prosthetic devices is to attain human likeness of prosthesis movements, a goal which is being pursued by research on social and human–robot interactions. Therefore, to reduce early abandonment of terminal devices, we propose that controllers should be designed so as to ensure effective task accomplishment in a natural fashion. In this work, we have analyzed and compared the performance of three types of myoelectric controller algorithms based on surface electromyography to control an underactuated and multi-degrees of freedom prosthetic hand, the SoftHand Pro.

The goal of the present study was to identify the myoelectric algorithm that best mimics the native hand movements. As a preliminary step, we first quantified the repeatability of the SoftHand Pro finger movements and identified the electromyographic recording sites for able-bodied individuals with the highest signal-to-noise ratio from two pairs of muscles, i.e., flexor digitorum superficialis/extensor digitorum communis, and flexor carpi radialis/extensor carpi ulnaris. Able-bodied volunteers were then asked to execute reach-to-grasp movements, while electromyography signals were recorded from flexor digitorum superficialis/extensor digitorum communis as this was identified as the muscle pair characterized by high signal-to-noise ratio and intuitive control. Subsequently, we tested three myoelectric controllers that mapped electromyography signals to position of the SoftHand Pro. We found that a differential electromyography-to-position mapping ensured the highest coherence with hand movements. Our results represent a first step toward a more effective and intuitive control of myoelectric hand prostheses.