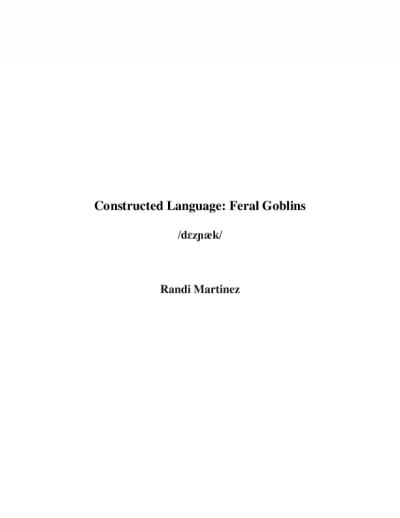 This is a constructed language made for fictional creatures that will be featured in a novel. The creatures are feral goblins, and they are based on Irish mythology. The novel…

This is a constructed language made for fictional creatures that will be featured in a novel. The creatures are feral goblins, and they are based on Irish mythology. The novel that the goblins and the language will be featured in is titled MaddConn, and it was written by Jon Bendera. It is an urban fantasy novel. The goblins have a language in the novel because there are a number of goblin characters throughout the story. One of the main characters, Maddi, has to survive amongst the feral goblins for a portion of the novel while another main character, Connor, works his way to her. She has multiple close encounters with them, and also has to find her way around their territory, so she comes into contact with the language many times. Although the language in the story was created to have developed prior to humanity, this constructed language was made to look somewhat similar to human language. As it will be involved in fiction that will be read by humans, it needs to be easily understood by humans. The language reveals features of the goblin culture and anatomy. For instance, it can be seen in the language that their shallow, wide mouths and thin lips influence their phonology. Their physiology influences much of their language. Likewise, they have three fingers on each hand, which influences their number system. As the goblins and their language developed before humans and because they are not human creatures, the typology and word order do not follow all of the correlations found in human languages. All in all, the lexicon includes many words that have to do with three of their favorite things: violence, food, and work.