Ants are a highly successful family of insects that thrive in a variety of habitats across the world. Perhaps their best-known features are complex social organization and strict division of…

Ants are a highly successful family of insects that thrive in a variety of habitats across the world. Perhaps their best-known features are complex social organization and strict division of labor, separating reproduction from the day-to-day maintenance and care of the colony, as well as strict discrimination against foreign individuals. Since these social characteristics in ants are thought to be mediated by semiochemicals, a thorough analysis of these signals, and the receptors that detect them, is critical in revealing mechanisms that lead to stereotypic behaviors. To address these questions, we have defined and characterized the major chemoreceptor families in a pair of behaviorally and evolutionarily distinct ant species, Camponotus floridanus and Harpegnathos saltator. Through comprehensive re-annotation, we show that these ant species harbor some of the largest yet known repertoires of odorant receptors (Ors) among insects, as well as a more modest number of gustatory receptors (Grs) and variant ionotropic glutamate receptors (Irs). Our phylogenetic analyses further demonstrate remarkably rapid gains and losses of ant Ors, while Grs and Irs have also experienced birth-and-death evolution to different degrees. In addition, comparisons of antennal transcriptomes between sexes identify many chemoreceptors that are differentially expressed between males and females and between species. We have also revealed an agonist for a worker-enriched OR from C. floridanus, representing the first case of a heterologously characterized ant tuning Or. Collectively, our analysis reveals a large number of ant chemoreceptors exhibiting patterns of differential expression and evolution consistent with sex/species-specific functions. These differentially expressed genes are likely associated with sex-based differences, as well as the radically different social lifestyles observed between C. floridanus and H. saltator, and thus are targets for further functional characterization. Our findings represent an important advance toward understanding the molecular basis of social interactions and the differential chemical ecologies among ant species. 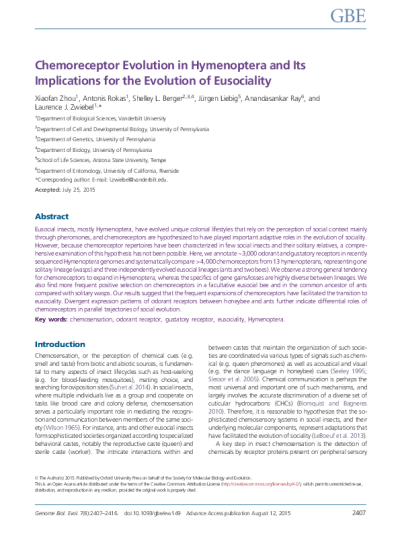 Eusocial insects, mostly Hymenoptera, have evolved unique colonial lifestyles that rely on the perception of social context mainly through pheromones, and chemoreceptors are hypothesized to have played important adaptive roles…

Eusocial insects, mostly Hymenoptera, have evolved unique colonial lifestyles that rely on the perception of social context mainly through pheromones, and chemoreceptors are hypothesized to have played important adaptive roles in the evolution of sociality. However, because chemoreceptor repertoires have been characterized in few social insects and their solitary relatives, a comprehensive examination of this hypothesis has not been possible. Here, we annotate ∼3,000 odorant and gustatory receptors in recently sequenced Hymenoptera genomes and systematically compare >4,000 chemoreceptors from 13 hymenopterans, representing one solitary lineage (wasps) and three independently evolved eusocial lineages (ants and two bees). We observe a strong general tendency for chemoreceptors to expand in Hymenoptera, whereas the specifics of gene gains/losses are highly diverse between lineages. We also find more frequent positive selection on chemoreceptors in a facultative eusocial bee and in the common ancestor of ants compared with solitary wasps. Our results suggest that the frequent expansions of chemoreceptors have facilitated the transition to eusociality. Divergent expression patterns of odorant receptors between honeybee and ants further indicate differential roles of chemoreceptors in parallel trajectories of social evolution.