Communities in Phoenix are confronted with numerous challenges that adversely affect human health and safety, with disproportionate impacts on low-income communities. While some challenges are being addressed at the city…

Communities in Phoenix are confronted with numerous challenges that adversely affect human health and safety, with disproportionate impacts on low-income communities. While some challenges are being addressed at the city level, new alliances at the neighbourhood level are initiating community development programmes and projects. This article reports on an intervention study carried out in collaboration with community representatives, city staff, and non-profit organisations to mitigate adverse effects of urban sprawl in the Sky Harbour Neighbourhood in Phoenix. Participatory research was conducted to design and test a tree and shade intervention. Challenges associated with navigating community desires and broader principles of sustainable development are discussed. The study offers a replicable and adaptable intervention research design aimed at empowering communities to meet urban challenges. 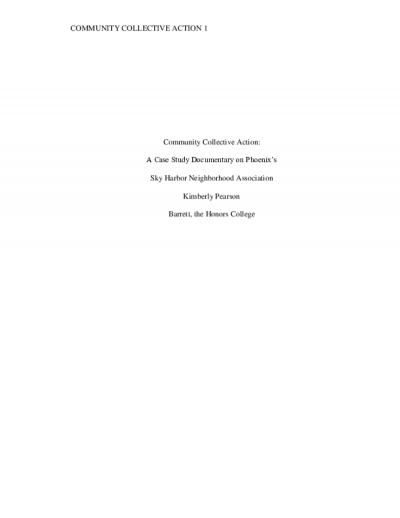 This project aims to provide a contextualized history of the Sky Harbor Neighborhood Association‟s community collective action efforts. The Sky Harbor Neighborhood (SHN) of East Phoenix is bounded on the West by 24th St., on the East by 32nd St., on the North by Roosevelt St., and the South by Washington Street. SHN is a majority Latino, low-income, working class community (U.S. Census Bureau, 2010) that faces a variety of challenges including low walkability due to inadequate pedestrian infrastructure, low tree coverage, and crime. East Van Buren St., which has a reputation for being one of Phoenix‟s red-light districts, splits the neighborhood in two. In addition, the SHN lacks some key amenities such as grocery stores and is partly considered a food desert by the United States Department of Agriculture (USDA Economic Research Service, 2012).