Although parasitic organisms are found worldwide, the relative importance of host specificity and geographic isolation for parasite speciation has been explored in only a few systems. Here, we study Plasmodium…

Although parasitic organisms are found worldwide, the relative importance of host specificity and geographic isolation for parasite speciation has been explored in only a few systems. Here, we study Plasmodium parasites known to infect Asian nonhuman primates, a monophyletic group that includes the lineage leading to the human parasite Plasmodium vivax and several species used as laboratory models in malaria research. We analyze the available data together with new samples from three sympatric primate species from Borneo: The Bornean orangutan and the long-tailed and the pig-tailed macaques. We find several species of malaria parasites, including three putatively new species in this biodiversity hotspot. Among those newly discovered lineages, we report two sympatric parasites in orangutans. We find no differences in the sets of malaria species infecting each macaque species indicating that these species show no host specificity. Finally, phylogenetic analysis of these data suggests that the malaria parasites infecting Southeast Asian macaques and their relatives are speciating three to four times more rapidly than those with other mammalian hosts such as lemurs and African apes. We estimate that these events took place in approximately a 3–4-Ma period. Based on the genetic and phenotypic diversity of the macaque malarias, we hypothesize that the diversification of this group of parasites has been facilitated by the diversity, geographic distributions, and demographic histories of their primate hosts. 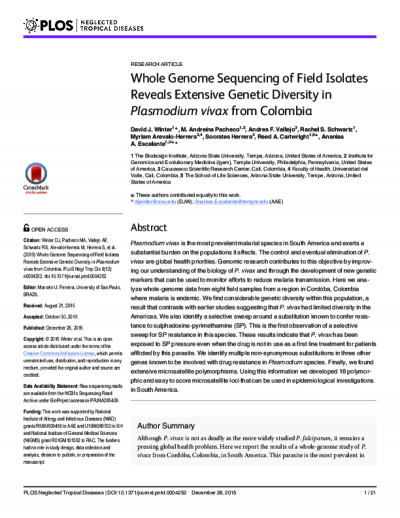 Plasmodium vivax is the most prevalent malarial species in South America and exerts a substantial burden on the populations it affects. The control and eventual elimination of P. vivax are…

Plasmodium vivax is the most prevalent malarial species in South America and exerts a substantial burden on the populations it affects. The control and eventual elimination of P. vivax are global health priorities. Genomic research contributes to this objective by improving our understanding of the biology of P. vivax and through the development of new genetic markers that can be used to monitor efforts to reduce malaria transmission. Here we analyze whole-genome data from eight field samples from a region in Cordóba, Colombia where malaria is endemic. We find considerable genetic diversity within this population, a result that contrasts with earlier studies suggesting that P. vivax had limited diversity in the Americas. We also identify a selective sweep around a substitution known to confer resistance to sulphadoxine-pyrimethamine (SP). This is the first observation of a selective sweep for SP resistance in this species. These results indicate that P. vivax has been exposed to SP pressure even when the drug is not in use as a first line treatment for patients afflicted by this parasite. We identify multiple non-synonymous substitutions in three other genes known to be involved with drug resistance in Plasmodium species. Finally, we found extensive microsatellite polymorphisms. Using this information we developed 18 polymorphic and easy to score microsatellite loci that can be used in epidemiological investigations in South America. 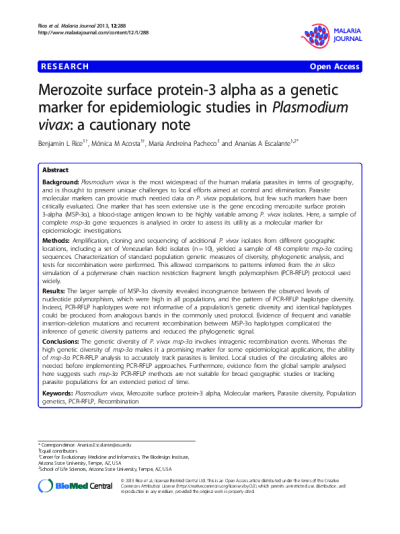 Background
Plasmodium vivax is the most widespread of the human malaria parasites in terms of geography, and is thought to present unique challenges to local efforts aimed at control and…

Background
Plasmodium vivax is the most widespread of the human malaria parasites in terms of geography, and is thought to present unique challenges to local efforts aimed at control and elimination. Parasite molecular markers can provide much needed data on P. vivax populations, but few such markers have been critically evaluated. One marker that has seen extensive use is the gene encoding merozoite surface protein 3-alpha (MSP-3α), a blood-stage antigen known to be highly variable among P. vivax isolates. Here, a sample of complete msp-3α gene sequences is analysed in order to assess its utility as a molecular marker for epidemiologic investigations.
Methods
Amplification, cloning and sequencing of additional P. vivax isolates from different geographic locations, including a set of Venezuelan field isolates (n = 10), yielded a sample of 48 complete msp-3α coding sequences. Characterization of standard population genetic measures of diversity, phylogenetic analysis, and tests for recombination were performed. This allowed comparisons to patterns inferred from the in silico simulation of a polymerase chain reaction restriction fragment length polymorphism (PCR-RFLP) protocol used widely.
Results
The larger sample of MSP-3α diversity revealed incongruence between the observed levels of nucleotide polymorphism, which were high in all populations, and the pattern of PCR-RFLP haplotype diversity. Indeed, PCR-RFLP haplotypes were not informative of a population’s genetic diversity and identical haplotypes could be produced from analogous bands in the commonly used protocol. Evidence of frequent and variable insertion-deletion mutations and recurrent recombination between MSP-3α haplotypes complicated the inference of genetic diversity patterns and reduced the phylogenetic signal.
Conclusions
The genetic diversity of P. vivax msp-3α involves intragenic recombination events. Whereas the high genetic diversity of msp-3α makes it a promising marker for some epidemiological applications, the ability of msp-3α PCR-RFLP analysis to accurately track parasites is limited. Local studies of the circulating alleles are needed before implementing PCR-RFLP approaches. Furthermore, evidence from the global sample analysed here suggests such msp-3α PCR-RFLP methods are not suitable for broad geographic studies or tracking parasite populations for an extended period of time.