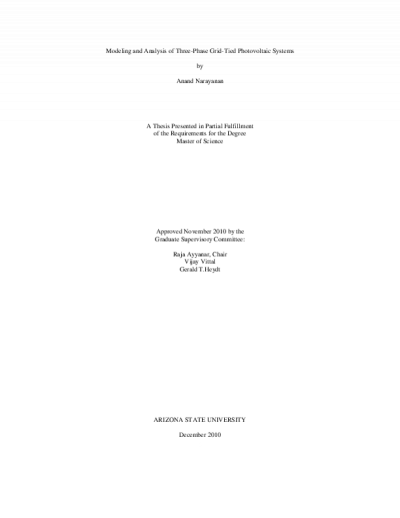 Market acceptability of distributed energy resource (DER) technologies and the gradual and consistent increase in their depth of penetration have generated significant interest over the past few years. In particular, in Arizona and several other states there has been a…

Market acceptability of distributed energy resource (DER) technologies and the gradual and consistent increase in their depth of penetration have generated significant interest over the past few years. In particular, in Arizona and several other states there has been a substantial in-crease in distributed photovoltaic (PV) generation interfaced to the power distribution systems, and is expected to continue to grow at a significant rate. This has made integration, control and optimal operation of DER units a main area of focus in the design and operation of distribution systems. Grid-connected, distributed PV covers a wide range of power levels ranging from small, single phase residential roof-top systems to large three-phase, multi-megawatt systems. The focus of this work is on analyzing large, three-phase systems, with the power distribution system of the Arizona State University (ASU) Tempe campus used as the test bed for analysis and simulation. The Tempe campus of ASU has presently 4.5 MW of installed PV capacity, with another 4.5 MW expected to be added by 2011, which will represent about 22% of PV penetration. The PV systems are interfaced to the grid invariably by a power electronic inverter. Many of the important characteristics of the PV generation are influenced by the design and performance of the inverter, and hence suitable models of the inverter are needed to analyze PV systems. Several models of distributed generation (DG), including switching and average models, suitable for different study objectives, and different control modes of the inverter have been described in this thesis. A critical function of the inverters is to quickly detect and eliminate unintentional islands during grid failure. In this thesis, many active anti-islanding techniques with voltage and frequency positive feedback have been studied. Effectiveness of these techniques in terms of the tripping times specified in IEEE Std. 1547 for interconnecting distributed resources with electric power systems has been analyzed. The impact of distributed PV on the voltage profile of a distribution system has been ana-lyzed with ASU system as the test bed using power systems analysis tools namely PowerWorld and CYMDIST. The present inverters complying with IEEE 1547 do not regulate the system vol-tage. However, the future inverters especially at higher power levels are expected to perform sev-eral grid support functions including voltage regulation and reactive power support. Hence, the impact of inverters with the reactive power support capabilities is also analyzed. Various test sce-narios corresponding to different grid conditions are simulated and it is shown that distributed PV improves the voltage profile of the system. The improvements are more significant when the PV generators are capable of reactive power support. Detailed short circuit analyses are also per-formed on the system, and the impact of distributed PV on the fault current magnitude, with and without reactive power injection, have been studied.