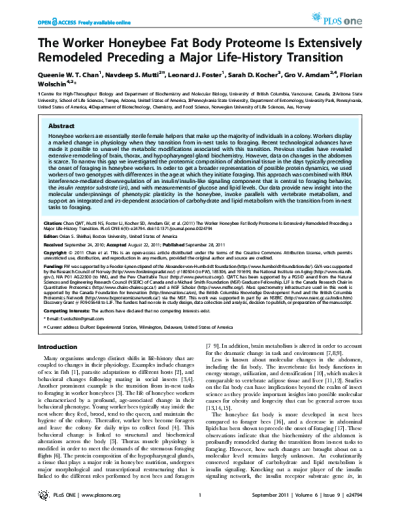 Honeybee workers are essentially sterile female helpers that make up the majority of individuals in a colony. Workers display a marked change in physiology when they transition from in-nest tasks…

Honeybee workers are essentially sterile female helpers that make up the majority of individuals in a colony. Workers display a marked change in physiology when they transition from in-nest tasks to foraging. Recent technological advances have made it possible to unravel the metabolic modifications associated with this transition. Previous studies have revealed extensive remodeling of brain, thorax, and hypopharyngeal gland biochemistry. However, data on changes in the abdomen is scarce. To narrow this gap we investigated the proteomic composition of abdominal tissue in the days typically preceding the onset of foraging in honeybee workers.
In order to get a broader representation of possible protein dynamics, we used workers of two genotypes with differences in the age at which they initiate foraging. This approach was combined with RNA interference-mediated downregulation of an insulin/insulin-like signaling component that is central to foraging behavior, the insulin receptor substrate (irs), and with measurements of glucose and lipid levels.
Our data provide new insight into the molecular underpinnings of phenotypic plasticity in the honeybee, invoke parallels with vertebrate metabolism, and support an integrated and irs-dependent association of carbohydrate and lipid metabolism with the transition from in-nest tasks to foraging. Development of an RNA Interference Tool, Characterization of Its Target, and an Ecological Test of Caste Differentiation in the Eusocial Wasp Polistes

Recent advancements in genomics provide new tools for evolutionary ecological research. The paper wasp genus Polistes is a model for social insect evolution and behavioral ecology. We developed RNA interference (RNAi)-mediated gene silencing to explore proposed connections between expression of hexameric storage proteins and worker vs. gyne (potential future foundress) castes in naturally-founded colonies of P. metricus. We extended four fragments of putative hexamerin-encoding P. metricus transcripts acquired from a previous study and fully sequenced a gene that encodes Hexamerin 2, one of two proposed hexameric storage proteins of P. metricus. MALDI-TOF/TOF, LC-MSMS, deglycosylation, and detection of phosphorylation assays showed that the two putative hexamerins diverge in peptide sequence and biochemistry. We targeted the hexamerin 2 gene in 5th (last)-instar larvae by feeding RNAi-inducing double-stranded hexamerin 2 RNA directly to larvae in naturally-founded colonies in the field. Larval development and adult traits were not significantly altered in hexamerin 2 knockdowns, but there were suggestive trends toward increased developmental time and less developed ovaries, which are gyne characteristics. By demonstrating how data acquisition from 454/Roche pyrosequencing can be combined with biochemical and proteomics assays and how RNAi can be deployed successfully in field experiments on Polistes, our results pave the way for functional genomic research that can contribute significantly to learning the interactions of environment, development, and the roles they play in paper wasp evolution and behavioral ecology. 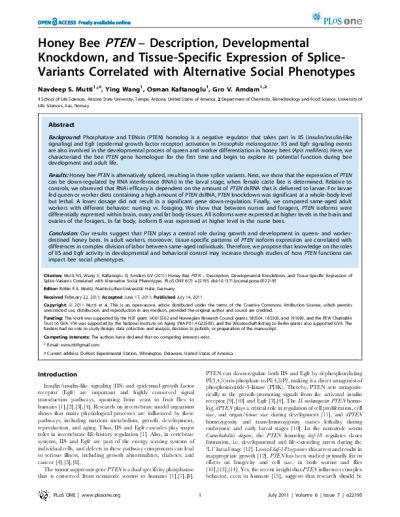 Background
Phosphatase and TENsin (PTEN) homolog is a negative regulator that takes part in IIS (insulin/insulin-like signaling) and Egfr (epidermal growth factor receptor) activation in Drosophila melanogaster. IIS and Egfr signaling events are also involved in the developmental process of queen and worker differentiation in honey bees (Apis mellifera). Here, we characterized the bee PTEN gene homologue for the first time and begin to explore its potential function during bee development and adult life.
Results
Honey bee PTEN is alternatively spliced, resulting in three splice variants. Next, we show that the expression of PTEN can be down-regulated by RNA interference (RNAi) in the larval stage, when female caste fate is determined. Relative to controls, we observed that RNAi efficacy is dependent on the amount of PTEN dsRNA that is delivered to larvae. For larvae fed queen or worker diets containing a high amount of PTEN dsRNA, PTEN knockdown was significant at a whole-body level but lethal. A lower dosage did not result in a significant gene down-regulation. Finally, we compared same-aged adult workers with different behavior: nursing vs. foraging. We show that between nurses and foragers, PTEN isoforms were differentially expressed within brain, ovary and fat body tissues. All isoforms were expressed at higher levels in the brain and ovaries of the foragers. In fat body, isoform B was expressed at higher level in the nurse bees.
Conclusion
Our results suggest that PTEN plays a central role during growth and development in queen- and worker-destined honey bees. In adult workers, moreover, tissue-specific patterns of PTEN isoform expression are correlated with differences in complex division of labor between same-aged individuals. Therefore, we propose that knowledge on the roles of IIS and Egfr activity in developmental and behavioral control may increase through studies of how PTEN functions can impact bee social phenotypes.