Development of a rapid and label-free Electrochemical Impedance Spectroscopy (EIS) biosensor for Cardiovascular Disease (CVD) detection based on Inerluekin-18 (IL-18) sensitivity was proposed to fill the technology gap between rapid and portable CVD point-of-care diagnosis. IL-18 was chosen for this CVD biosensor due to its ability to detect plaque vulnerability of the heart. Custom (hand) made sensors, which utilized a three electrode configuration with a gold disk working electrode, were created to run EIS using both IL-18 and anti-IL-18 molecules in both purified and blood solutions. The EIS results for IL-18 indicated the optimal detection frequency to be 371Hz. Blood interaction on the working electrode increased the dynamic range of impedance values for the biosensor. Future work includes Developing and testing prototypes of the biosensor along with determining if a Nafion based coating on the working electrode will reduce the dynamic range of impedance values caused by blood interference.

Smoking Cessation for the Parents of Pre-Term Infants: Recommendations for a Pilot Program at Aultman Hospital's NICU

Smoke exposure in preterm infants can cause adverse health outcomes in these children. Preterm infants exposed to tobacco smoke have an increased risk for sudden infant death syndrome (SIDS), and…

Smoke exposure in preterm infants can cause adverse health outcomes in these children. Preterm infants exposed to tobacco smoke have an increased risk for sudden infant death syndrome (SIDS), and metabolic syndrome, asthma, respiratory infections, ear infections and decreased cognitive function compared to healthy infants (Wilson 2011, Blizzard 2003, Bock 2008, Hutchison 1998). A smoking cessation program for parents of pre-term infants at Aultman Hospital in Canton, Ohio was designed to help parents of pre-term infants cease smoking behavior. The outcomes of this program were intended to be the topic of my honors thesis; however, lack of participation in the program shifted my research focus to designing a program, based on a review of "best practices" in the literature, that might increase participation. Among those parents who were asked to participate (N=56), being of low socioeconomic status correlated highest with smoking behavior . Through a literature review, I determined that the best practices to enhance participation for this group would be to include motivational interviewing, the phone number to a toll free quit line, and alternate smoking resources (pamphlets, alternative DVD's) for these Neonatal Intensive Care Unit (NICU) parents at Aultman. By the parent's participation in the Aultman smoking cessation program, long-term health outcomes of their newborns may improve by reducing their exposure to tobacco smoke. These children may grow up in an environment with less smoke exposure, which may decrease their risk of disease (Bock 2008). 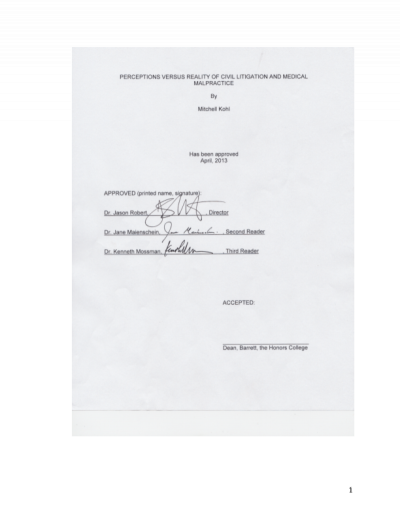 Perceptions versus reality of civil litigation and medical malpractice

Civil litigation and medical malpractice both seem to be plagued by similar misperceptions. The general public, lawyers, physicians and our elected officials are all in considerable error regarding the reality…

Civil litigation and medical malpractice both seem to be plagued by similar misperceptions. The general public, lawyers, physicians and our elected officials are all in considerable error regarding the reality behind civil litigation. The perception is that there are an increasing number of claims filed, and that in those cases that are filed the plaintiff is likely to win and be awarded a large sum of money. Regarding medical malpractice, in particular, is the belief that such litigation increases the over-all costs of healthcare by a significant dollar amount through the costs of litigation as well as the increasing instances of defensive medicine. Physicians further state that it is the absurd awards all too common in medical malpractice cases that are to blame for the out of control increases seen in medical malpractice premiums. These increases in premiums are said to have forced a large number of physicians out of practice that will hurt the general public's access to health care. These perceptions are at least reinforced by the media coverage that reports on the rare multimillion-dollar cases and from reports by insurance companies and physicians, in their attempt to lower their business costs by decreasing medical malpractice insurance premiums. By understanding the prevalence of such misperceptions, the truth behind the claims, and how such misinformation reaches the public and has spread to all levels of society, empirical data must be presented to the public in order to overcome the misperceptions.