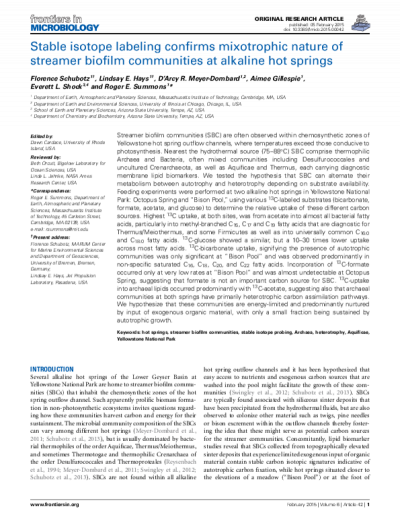 Streamer biofilm communities (SBC) are often observed within chemosynthetic zones of Yellowstone hot spring outflow channels, where temperatures exceed those conducive to photosynthesis. Nearest the hydrothermal source (75–88°C) SBC comprise thermophilic Archaea and Bacteria, often mixed communities including Desulfurococcales and uncultured Crenarchaeota, as well as Aquificae and Thermus, each carrying diagnostic membrane lipid biomarkers. We tested the hypothesis that SBC can alternate their metabolism between autotrophy and heterotrophy depending on substrate availability. Feeding experiments were performed at two alkaline hot springs in Yellowstone National Park: Octopus Spring and “Bison Pool,” using various [superscript 13]C-labeled substrates (bicarbonate, formate, acetate, and glucose) to determine the relative uptake of these different carbon sources. Highest [superscript 13]C uptake, at both sites, was from acetate into almost all bacterial fatty acids, particularly into methyl-branched C[subscript 15], C[subscript 17] and C[subscript 19] fatty acids that are diagnostic for Thermus/Meiothermus, and some Firmicutes as well as into universally common C[subscript 16:0] and C[subscript 18:0] fatty acids. [superscript 13]C-glucose showed a similar, but a 10–30 times lower uptake across most fatty acids. [superscript 13]C-bicarbonate uptake, signifying the presence of autotrophic communities was only significant at “Bison Pool” and was observed predominantly in non-specific saturated C[subscript 16], C[subscript 18], C[subscript 20], and C[subscript 22] fatty acids. Incorporation of [superscript 13]C-formate occurred only at very low rates at “Bison Pool” and was almost undetectable at Octopus Spring, suggesting that formate is not an important carbon source for SBC. [superscript 13]C-uptake into archaeal lipids occurred predominantly with [superscript 13]C-acetate, suggesting also that archaeal communities at both springs have primarily heterotrophic carbon assimilation pathways. We hypothesize that these communities are energy-limited and predominantly nurtured by input of exogenous organic material, with only a small fraction being sustained by autotrophic growth. 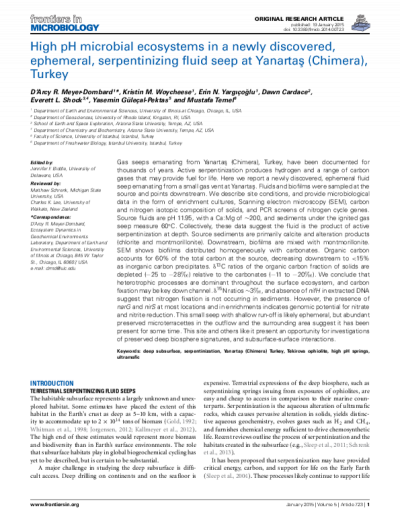 Gas seeps emanating from Yanartaş (Chimera), Turkey, have been documented for thousands of years. Active serpentinization produces hydrogen and a range of carbon gases that may provide fuel for life.…

Gas seeps emanating from Yanartaş (Chimera), Turkey, have been documented for thousands of years. Active serpentinization produces hydrogen and a range of carbon gases that may provide fuel for life. Here we report a newly discovered, ephemeral fluid seep emanating from a small gas vent at Yanartaş. Fluids and biofilms were sampled at the source and points downstream. We describe site conditions, and provide microbiological data in the form of enrichment cultures, Scanning electron microscopy (SEM), carbon and nitrogen isotopic composition of solids, and PCR screens of nitrogen cycle genes. Source fluids are pH 11.95, with a Ca:Mg of ~200, and sediments under the ignited gas seep measure 60°C. Collectively, these data suggest the fluid is the product of active serpentinization at depth. Source sediments are primarily calcite and alteration products (chlorite and montmorillonite). Downstream, biofilms are mixed with montmorillonite. SEM shows biofilms distributed homogeneously with carbonates. Organic carbon accounts for 60% of the total carbon at the source, decreasing downstream to <15% as inorganic carbon precipitates. δ[superscript 13]C ratios of the organic carbon fraction of solids are depleted (−25 to −28‰) relative to the carbonates (−11 to −20‰). We conclude that heterotrophic processes are dominant throughout the surface ecosystem, and carbon fixation may be key down channel. δ[superscript 15]N ratios ~3‰, and absence of nifH in extracted DNA suggest that nitrogen fixation is not occurring in sediments. However, the presence of narG and nirS at most locations and in enrichments indicates genomic potential for nitrate and nitrite reduction. This small seep with shallow run-off is likely ephemeral, but abundant preserved microterracettes in the outflow and the surrounding area suggest it has been present for some time. This site and others like it present an opportunity for investigations of preserved deep biosphere signatures, and subsurface-surface interactions. 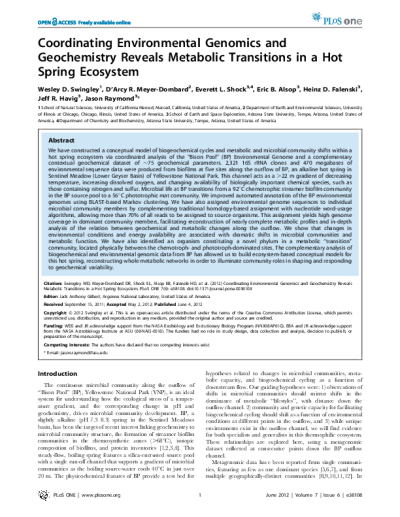 We have constructed a conceptual model of biogeochemical cycles and metabolic and microbial community shifts within a hot spring ecosystem via coordinated analysis of the “Bison Pool” (BP) Environmental Genome and a complementary contextual geochemical dataset of ∼75 geochemical parameters. 2,321 16S rRNA clones and 470 megabases of environmental sequence data were produced from biofilms at five sites along the outflow of BP, an alkaline hot spring in Sentinel Meadow (Lower Geyser Basin) of Yellowstone National Park. This channel acts as a >22 m gradient of decreasing temperature, increasing dissolved oxygen, and changing availability of biologically important chemical species, such as those containing nitrogen and sulfur. Microbial life at BP transitions from a 92°C chemotrophic streamer biofilm community in the BP source pool to a 56°C phototrophic mat community. We improved automated annotation of the BP environmental genomes using BLAST-based Markov clustering. We have also assigned environmental genome sequences to individual microbial community members by complementing traditional homology-based assignment with nucleotide word-usage algorithms, allowing more than 70% of all reads to be assigned to source organisms. This assignment yields high genome coverage in dominant community members, facilitating reconstruction of nearly complete metabolic profiles and in-depth analysis of the relation between geochemical and metabolic changes along the outflow. We show that changes in environmental conditions and energy availability are associated with dramatic shifts in microbial communities and metabolic function. We have also identified an organism constituting a novel phylum in a metabolic “transition” community, located physically between the chemotroph- and phototroph-dominated sites. The complementary analysis of biogeochemical and environmental genomic data from BP has allowed us to build ecosystem-based conceptual models for this hot spring, reconstructing whole metabolic networks in order to illuminate community roles in shaping and responding to geochemical variability.