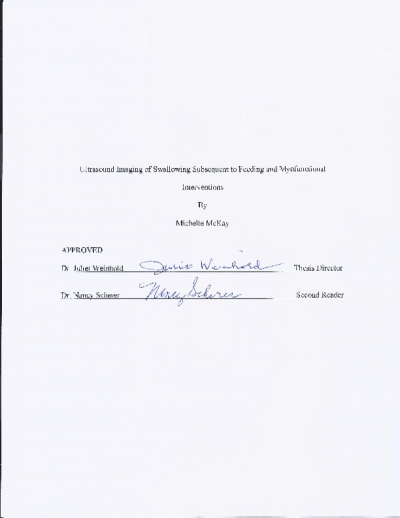 Ultrasound Imaging of Swallowing Subsequent to Feeding and Myofunctional Intervention

The purpose of this study was to examine swallowing patterns using ultrasound technology subsequent to the implementation of two therapeutic interventions. Baseline swallow patterns were compared to swallows after implementation of therapeutic interventions common in both feeding therapy (FT) and orofacial myofunctional therapy (OMT). The interventions consist of stimulation of the tongue by z-vibe and tongue pops. Changes in swallowing patterns are described, and similarities of interventions across the two professions are discussed. Ultrasound research in the realm of swallowing is sparse despite having potential clinical application in both professions. In using ultrasound, this study outlines a protocol for utilization of a hand-held probe and reinforces a particular protocol described in the literature. Real-time ultrasound recordings of swallows for 19 adult female subjects were made. Participants with orofacial myofunctional disorder are compared to a group with typical swallowing and differences in swallowing patterns are described. Three stages of the oral phase of the swallow were assigned based on ultrasonic observation of the tongue shape. Analysis involves total duration of the swallow, duration of the three stages in relation to the total duration of the swallow, and the number of swallows required for the bolus to be cleared from the oral cavity. No significant effects of either intervention were found. Swallowing patterns showed a general trend to become faster in total duration subsequent to each intervention. An unexpected finding showed significant changes in the relationship between the bolus preparation stage and the bolus transportation stage when comparing the group classified as having a single swallow and the group classified as having multiple swallows.