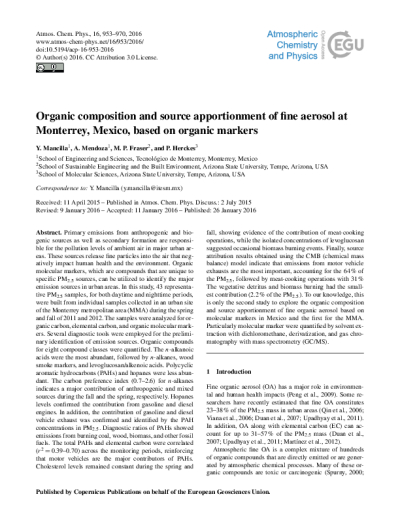 Organic composition and source apportionment of fine aerosol at Monterrey, Mexico, based on organic markers

Primary emissions from anthropogenic and biogenic sources as well as secondary formation are responsible for the pollution levels of ambient air in major urban areas. These sources release fine particles…

Primary emissions from anthropogenic and biogenic sources as well as secondary formation are responsible for the pollution levels of ambient air in major urban areas. These sources release fine particles into the air that negatively impact human health and the environment. Organic molecular markers, which are compounds that are unique to specific PM[subscript 2.5] sources, can be utilized to identify the major emission sources in urban areas. In this study, 43 representative PM[subscript 2.5] samples, for both daytime and nighttime periods, were built from individual samples collected in an urban site of the Monterrey metropolitan area (MMA) during the spring and fall of 2011 and 2012. The samples were analyzed for organic carbon, elemental carbon, and organic molecular markers. Several diagnostic tools were employed for the preliminary identification of emission sources. Organic compounds for eight compound classes were quantified. The n-alkanoic acids were the most abundant, followed by n-alkanes, wood smoke markers, and levoglucosan/alkenoic acids. Polycyclic aromatic hydrocarbons (PAHs) and hopanes were less abundant. The carbon preference index (0.7–2.6) for n-alkanes indicates a major contribution of anthropogenic and mixed sources during the fall and the spring, respectively. Hopanes levels confirmed the contribution from gasoline and diesel engines. In addition, the contribution of gasoline and diesel vehicle exhaust was confirmed and identified by the PAH concentrations in PM[subscript 2.5]. Diagnostic ratios of PAHs showed emissions from burning coal, wood, biomass, and other fossil fuels. The total PAHs and elemental carbon were correlated (r[superscript 2] =  0.39–0.70) across the monitoring periods, reinforcing that motor vehicles are the major contributors of PAHs. Cholesterol levels remained constant during the spring and fall, showing evidence of the contribution of meat-cooking operations, while the isolated concentrations of levoglucosan suggested occasional biomass burning events. Finally, source attribution results obtained using the CMB (chemical mass balance) model indicate that emissions from motor vehicle exhausts are the most important, accounting for the 64 % of the PM[subscript 2.5], followed by meat-cooking operations with 31 % The vegetative detritus and biomass burning had the smallest contribution (2.2 % of the PM[subscript 2.5]). To our knowledge, this is only the second study to explore the organic composition and source apportionment of fine organic aerosol based on molecular markers in Mexico and the first for the MMA. Particularly molecular marker were quantified by solvent extraction with dichloromethane, derivatization, and gas chromatography with mass spectrometry (GC/MS).