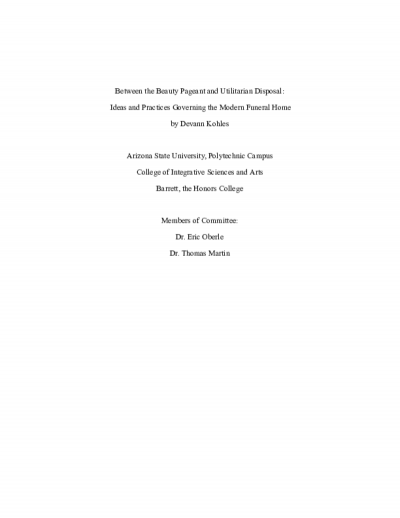 Between the Beauty Pageant and Utilitarian Disposal: Ideas and Practices Governing the Modern Funeral Home

This thesis is structured proleptically, in the initial section I introduce the modern funeral service practices, what I call the compromise. The compromise consists of the system of burial rituals…

This thesis is structured proleptically, in the initial section I introduce the modern funeral service practices, what I call the compromise. The compromise consists of the system of burial rituals defined by what I call the beauty pageant and the utilitarian disposal. The beauty pageant is the burial practice which involves embalming and cosmetically decorating the deceased. The utilitarian disposal consists of cremating the deceased into ashes and leaving the option available for added accessories. Both aspects of the modern funeral are subject to exploitation of the deceased as they are products of commodifying the deceased. Following this, I detail the medieval burial practices which define the burial practices of the Old Regime, managed by the authority of the Church. I recount the details which led up to the commercialization of funeral practices, which took the authority over burial from the hands of the Church and put it into the hands of the state. The commercialization of burial came with the bureaucratization and medicalization of death, since the death certificate was in the hands of medical staff and the state, and the burial rites were in the hands of the tradesman, the undertaker. The shift of power allowed for those unable to be buried under the Old regime, a place in the communal burial grounds, the cemetery. But with this commercialization came the exclusion of the poor, which were cared for under the charity of the Church prior to. This led to the development of the secular, pragmatic burial style, cremation. Cremation added another aspect to the modern funeral services, a utilitarian method in dealing with the deceased, which has the availability to be embellished or left as pragmatic. The utilitarian method of burial is subject to the same exploitative practices as the beauty pageant, since the endless options of dealing with the ashes of the deceased are commodified. The aim of the modern funeral industry is to provide a ritual and practice which allows for a commemorative event for the bereaved families of the deceased. Since the modern funeral practices have the capability of exploiting those bereaved families, it presents the question of what ways could the families commemorate without the commodification of the deceased. In my conclusion, I propose the idea of commemoration through a focus of legacy and memorialization through an obituary or memorial that represents who the person was in life and captures the essence of the personality of the deceased. This is along the lines of the commemoration that has been a part of human history since the Greek warriors, whose body was not the focus of death, but instead captures the essence of their values.