Introduction
Maternal kin selection is a driving force in the evolution of mammalian social complexity and it requires that kin are distinctive from nonkin. The transition from the ancestral state…

Introduction
Maternal kin selection is a driving force in the evolution of mammalian social complexity and it requires that kin are distinctive from nonkin. The transition from the ancestral state of asociality to the derived state of complex social groups is thought to have occurred via solitary foraging, in which individuals forage alone, but, unlike the asocial ancestors, maintain dispersed social networks via scent-marks and vocalizations. We hypothesize that matrilineal signatures in vocalizations were an important part of these networks. We used the solitary foraging gray mouse lemur (Microcebus murinus) as a model for ancestral solitary foragers and tested for matrilineal signatures in their calls, thus investigating whether such signatures are already present in solitary foragers and could have facilitated the kin selection thought to have driven the evolution of increased social complexity in mammals. Because agonism can be very costly, selection for matrilineal signatures in agonistic calls should help reduce agonism between unfamiliar matrilineal kin. We conducted this study on a well-studied population of wild mouse lemurs at Ankarafantsika National Park, Madagascar. We determined pairwise relatedness using seven microsatellite loci, matrilineal relatedness by sequencing the mitrochondrial D-loop, and sleeping group associations using radio-telemetry. We recorded agonistic calls during controlled social encounters and conducted a multi-parametric acoustic analysis to determine the spectral and temporal structure of the agonistic calls. We measured 10 calls for each of 16 females from six different matrilineal kin groups.
Results
Calls were assigned to their matriline at a rate significantly higher than chance (pDFA: correct = 47.1%, chance = 26.7%, p = 0.03). There was a statistical trend for a negative correlation between acoustic distance and relatedness (Mantel Test: g = -1.61, Z = 4.61, r = -0.13, p = 0.058).
Conclusions
Mouse lemur agonistic calls are moderately distinctive by matriline. Because sleeping groups consisted of close maternal kin, both genetics and social learning may have generated these acoustic signatures. As mouse lemurs are models for solitary foragers, we recommend further studies testing whether the lemurs use these calls to recognize kin. This would enable further modeling of how kin recognition in ancestral species could have shaped the evolution of complex sociality. 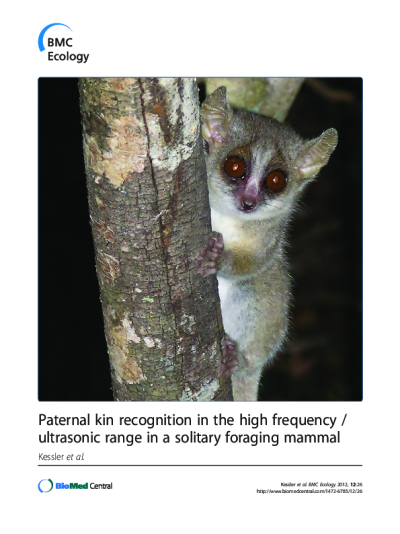 Background
Kin selection is a driving force in the evolution of mammalian social complexity. Recognition of paternal kin using vocalizations occurs in taxa with cohesive, complex social groups. This is…

Background
Kin selection is a driving force in the evolution of mammalian social complexity. Recognition of paternal kin using vocalizations occurs in taxa with cohesive, complex social groups. This is the first investigation of paternal kin recognition via vocalizations in a small-brained, solitary foraging mammal, the grey mouse lemur (Microcebus murinus), a frequent model for ancestral primates. We analyzed the high frequency/ultrasonic male advertisement (courtship) call and alarm call.
Results
Multi-parametric analyses of the calls’ acoustic parameters and discriminant function analyses showed that advertisement calls, but not alarm calls, contain patrilineal signatures. Playback experiments controlling for familiarity showed that females paid more attention to advertisement calls from unrelated males than from their fathers. Reactions to alarm calls from unrelated males and fathers did not differ.
Conclusions
1) Findings provide the first evidence of paternal kin recognition via vocalizations in a small-brained, solitarily foraging mammal. 2) High predation, small body size, and dispersed social systems may select for acoustic paternal kin recognition in the high frequency/ultrasonic ranges, thus limiting risks of inbreeding and eavesdropping by predators or conspecific competitors. 3) Paternal kin recognition via vocalizations in mammals is not dependent upon a large brain and high social complexity, but may already have been an integral part of the dispersed social networks from which more complex, kin-based sociality emerged.