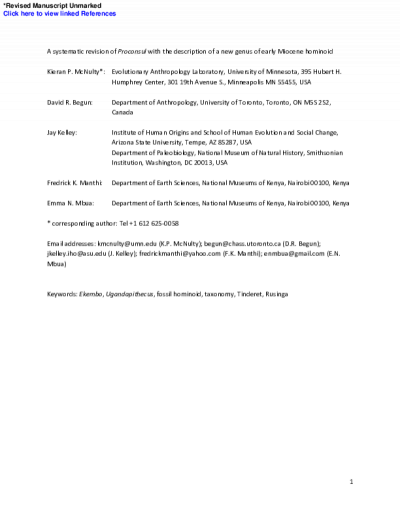 For more than 80 years, Proconsul has held a pivotal position in interpretations of catarrhine evolution in East Africa. From early hypotheses of phyletic relationships with modern apes to more…

For more than 80 years, Proconsul has held a pivotal position in interpretations of catarrhine evolution in East Africa. From early hypotheses of phyletic relationships with modern apes to more recent debates over their position within Hominoidea, the well-preserved fossils of this genus have been a foundation for most evolutionary scenarios regarding the early diversification of hominoids. The majority of what we "know" about Proconsul, however, derives from abundant younger fossils found at the Kisingiri localities on Rusinga and Mfangano Islands rather than from the smaller samples found at Koru – the locality of the type species, Proconsul africanus – and other Tinderet deposits. One outcome of this is seen in recent attempts to expand the genus "Ugandapithecus" (considered here a junior subjective synonym of Proconsul), wherein much of the Tinderet sample was referred to that genus based primarily on differentiating it from the Kisingiri specimens rather than from the type species, P. africanus. This and other recent taxonomic revisions to Proconsul prompted us to undertake a systematic review of dentognathic specimens attributed to this taxon. Results of our study underscore and extend the substantive distinction of Tinderet and Ugandan Proconsul (i.e., Proconsul sensu stricto) from the Kisingiri fossils, the latter recognized here as a new genus. Specimens of the new genus are readily distinguished from Proconsul sensu stricto by morphology preserved in the P. africanus holotype, M 14084, but also in I1s, lower incisors, upper and lower canines, and especially mandibular characteristics. A number of these differences are more advanced among Kisingiri specimens in the direction of crown hominoids. Proconsul sensu stricto is characterized by a suite of unique features that strongly unite the included species as a clade. There have been decades of contentious debate over the phylogenetic placement of Proconsul (sensu lato), due in part to there being a mixture of primitive and more advanced morphology within the single genus. By recognizing two distinct clades that, in large part, segregate these character states, we believe that better phylogenetic resolution can be achieved.