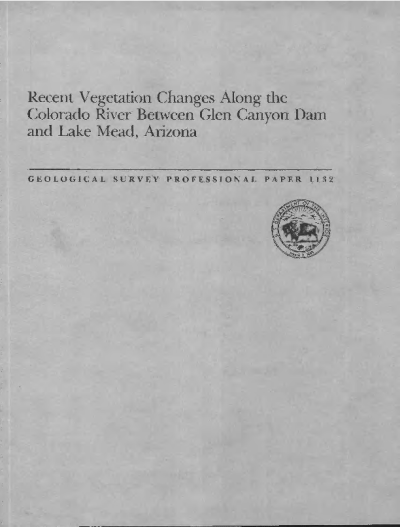 Vegetation changes in the canyon of the Colorado River between Glen Canyon Dam and Lake Mead were studied by comparing photo­ graphs taken prior to the completion of the Glen Canyon Dam in 1963 with those taken afterwards at the same sites. The old photo­ graphs, taken by J. K. Millers, T. H. O'Sullivan, William Bell, F. A. Nims, R. B. Stanton, N. W. Carkhuff, N. H. Darton, L. R. Freeman, E. C. LaRue, and others, document conditions as they were between 1872 and 1963. In general, the older pictures show an absence of riparian plants along the banks of the river. The new photographs of each pair were taken in 1972 through 1976. The most obvious vege­tation change revealed by the photograph comparison is the in­ creased density of many species. Exotic species, such as saltcedar and camelthorn, and native riparian plants, such as sandbar willow, arrowweed, desert broom, and cattail, now form a new riparian com­munity along much of the channel of the Colorado River between Glen Canyon Dam and the Grand Wash Cliffs.

The matched photographs also reveal that changes have occurred in the amount of sand and silt deposited along the banks. The photo­ graphs show that in some areas erosion has been significant since the time of the earlier photograph while at other locations sediment has accumulated on river bars and terraces. Detailed maps are presented showing distribution of 25 plant species. Some of these, such as Russian olive and elm, were unknown along the Grand Canyon reach of the Colorado River before 1976.

Relevant data are presented to show changes in the hydrologic regime since completion of Glen Canyon Dam. Flooding, as expressed by annual maximum stage, has decreased in amplitude, and its sea­ son of occurrence has changed from spring (May-June) to a longer period from April through October. Dam construction has had a moderating influence on several other hydrologic variables. Com­pared to the predam era, discharge through the year now varies within narrow limits, changing little from month to month or season to season; annual maximum discharges are now strikingly uniform, and sediment load has materially decreased. Increases have occurred in some characteristics, however, such as daily variation in river stage and median discharge.

The interaction of decreased flooding, decreased sediment load, and increased riparian plant coverage makes the future of existing river fans, bars, and terraces uncertain. The establishment of a new ecological equilibrium at the bottom of the Grand Canyon may re­ quire many decades.

Contributors
Agent
Created
Date Created
The date the item was original created (prior to any relationship with the ASU Digital Repositories.)
1980