Background
Following incomplete spinal cord injury (iSCI), descending drive is impaired, possibly leading to a decrease in the complexity of gait. To test the hypothesis that iSCI impairs gait coordination…

Background
Following incomplete spinal cord injury (iSCI), descending drive is impaired, possibly leading to a decrease in the complexity of gait. To test the hypothesis that iSCI impairs gait coordination and decreases locomotor complexity, we collected 3D joint angle kinematics and muscle parameters of rats with a sham or an incomplete spinal cord injury.
Methods
12 adult, female, Long-Evans rats, 6 sham and 6 mild-moderate T8 iSCI, were tested 4 weeks following injury. The Basso Beattie Bresnahan locomotor score was used to verify injury severity. Animals had reflective markers placed on the bony prominences of their limb joints and were filmed in 3D while walking on a treadmill. Joint angles and segment motion were analyzed quantitatively, and complexity of joint angle trajectory and overall gait were calculated using permutation entropy and principal component analysis, respectively. Following treadmill testing, the animals were euthanized and hindlimb muscles removed. Excised muscles were tested for mass, density, fiber length, pennation angle, and relaxed sarcomere length.
Results
Muscle parameters were similar between groups with no evidence of muscle atrophy. The animals showed overextension of the ankle, which was compensated for by a decreased range of motion at the knee. Left-right coordination was altered, leading to left and right knee movements that are entirely out of phase, with one joint moving while the other is stationary. Movement patterns remained symmetric. Permutation entropy measures indicated changes in complexity on a joint specific basis, with the largest changes at the ankle. No significant difference was seen using principal component analysis. Rats were able to achieve stable weight bearing locomotion at reasonable speeds on the treadmill despite these deficiencies.
Conclusions
Decrease in supraspinal control following iSCI causes a loss of complexity of ankle kinematics. This loss can be entirely due to loss of supraspinal control in the absence of muscle atrophy and may be quantified using permutation entropy. Joint-specific differences in kinematic complexity may be attributed to different sources of motor control. This work indicates the importance of the ankle for rehabilitation interventions following spinal cord injury. 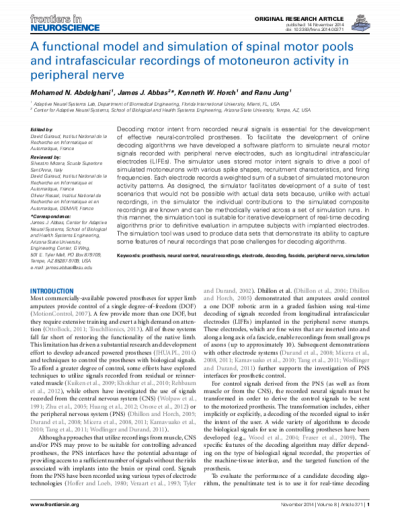 Decoding motor intent from recorded neural signals is essential for the development of effective neural-controlled prostheses. To facilitate the development of online decoding algorithms we have developed a software platform to simulate neural motor signals recorded with peripheral nerve electrodes, such as longitudinal intrafascicular electrodes (LIFEs). The simulator uses stored motor intent signals to drive a pool of simulated motoneurons with various spike shapes, recruitment characteristics, and firing frequencies. Each electrode records a weighted sum of a subset of simulated motoneuron activity patterns. As designed, the simulator facilitates development of a suite of test scenarios that would not be possible with actual data sets because, unlike with actual recordings, in the simulator the individual contributions to the simulated composite recordings are known and can be methodically varied across a set of simulation runs. In this manner, the simulation tool is suitable for iterative development of real-time decoding algorithms prior to definitive evaluation in amputee subjects with implanted electrodes. The simulation tool was used to produce data sets that demonstrate its ability to capture some features of neural recordings that pose challenges for decoding algorithms. One explanation for membrane accommodation in response to a slowly rising current, and the phenomenon underlying the dynamics of elliptic bursting in nerves, is the mathematical problem of dynamic Hopf…

One explanation for membrane accommodation in response to a slowly rising current, and the phenomenon underlying the dynamics of elliptic bursting in nerves, is the mathematical problem of dynamic Hopf bifurcation. This problem has been studied extensively for linear (deterministic and stochastic) current ramps, nonlinear ramps, and elliptic bursting. These studies primarily investigated dynamic Hopf bifurcation in space-clamped excitable cells. In this study we introduce a new phenomenon associated with dynamic Hopf bifurcation. We show that for excitable spiny cables injected at one end with a slow current ramp, the generation of oscillations may occur an order one distance away from the current injection site. The phenomenon is significant since in the model the geometric and electrical parameters, as well as the ion channels, are uniformly distributed. In addition to demonstrating the phenomenon computationally, we analyze the problem using a singular perturbation method that provides a way to predict when and where the onset will occur in response to the input stimulus. We do not see this phenomenon for excitable cables in which the ion channels are embedded in the cable membrane itself, suggesting that it is essential for the channels to be isolated in the spines. The efficacy of deep brain stimulation (DBS) in Parkinson's disease (PD) has been convincingly demonstrated in studies that compare motor performance with and without stimulation, but characterization of performance at…

The efficacy of deep brain stimulation (DBS) in Parkinson's disease (PD) has been convincingly demonstrated in studies that compare motor performance with and without stimulation, but characterization of performance at intermediate stimulation amplitudes has been limited. This study investigated the effects of changing DBS amplitude in order to assess dose-response characteristics, inter-subject variability, consistency of effect across outcome measures, and day-to-day variability. Eight subjects with PD and bilateral DBS systems were evaluated at their clinically determined stimulation (CDS) and at three reduced amplitude conditions: approximately 70%, 30%, and 0% of the CDS (MOD, LOW, and OFF, respectively). Overall symptom severity and performance on a battery of motor tasks - gait, postural control, single-joint flexion-extension, postural tremor, and tapping - were assessed at each condition using the motor section of the Unified Parkinson's Disease Rating Scale (UPDRS-III) and quantitative measures. Data were analyzed to determine whether subjects demonstrated a threshold response (one decrement in stimulation resulted in ≥ 70% of the maximum change) or a graded response to reduced stimulation. Day-to-day variability was assessed using the CDS data from the three testing sessions. Although the cohort as a whole demonstrated a graded response on several measures, there was high variability across subjects, with subsets exhibiting graded, threshold, or minimal responses. Some subjects experienced greater variability in their CDS performance across the three days than the change induced by reducing stimulation. For several tasks, a subset of subjects exhibited improved performance at one or more of the reduced conditions. Reducing stimulation did not affect all subjects equally, nor did it uniformly affect each subject's performance across tasks. These results indicate that altered recruitment of neural structures can differentially affect motor capabilities and demonstrate the need for clinical consideration of the effects on multiple symptoms across several days when selecting DBS parameters. Spinal cord injury (SCI) disrupts the communication between supraspinal circuits and spinal circuits distal to the injury. This disruption causes changes in the motor abilities of the affected individual, but…

Spinal cord injury (SCI) disrupts the communication between supraspinal circuits and spinal circuits distal to the injury. This disruption causes changes in the motor abilities of the affected individual, but it can also be used as an opportunity to study motor control in the absence or limited presence of control from the brain. In the case of incomplete paraplegia, locomotion is impaired and often results in increased incidence of foot drag and decreased postural stability after injury. The overall goal of this work is to understand how changes in kinematics of movement and neural control of muscles effect locomotor coordination following SCI. Toward this end, we examined musculoskeletal parameters and kinematics of gait in rats with and without incomplete SCI (iSCI) and used an empirically developed computational model to test related hypotheses. The first study tested the hypothesis that iSCI causes a decrease in locomotor and joint angle movement complexity. A rat model was used to measure musculoskeletal properties and gait kinematics following mild iSCI. The data indicated joint-specific changes in kinematics in the absence of measurable muscle atrophy, particularly at the ankle as a result of the injury. Kinematic changes manifested as a decrease in complexity of ankle motion as indicated by measures of permutation entropy. In the second study, a new 2-dimensional computational model of the rat ankle combining forward and inverse dynamics was developed using the previously collected data. This model was used to test the hypothesis that altered coordination of flexor and extensor muscles (specifically alteration in burst shape and timing) acting at the ankle joint could be responsible for increases in incidence of foot drag following injury. Simulation results suggest a time course for changes in neural control following injury that begins with foot drag and decreased delay between antagonistic muscle activations. Following this, beneficial adaptations in muscle activation profile and ankle kinematics counteract the decreased delay to allow foot swing. In both studies, small changes in neural control caused large changes in behavior, particularly at the ankle. Future work will further examine the role of neural control of hindlimb in rat locomotion following iSCI.