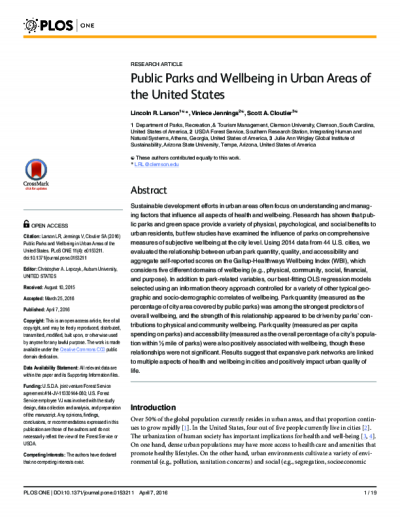 Public Parks and Wellbeing in Urban Areas of the United States

Sustainable development efforts in urban areas often focus on understanding and managing factors that influence all aspects of health and wellbeing. Research has shown that public parks and green space…

Sustainable development efforts in urban areas often focus on understanding and managing factors that influence all aspects of health and wellbeing. Research has shown that public parks and green space provide a variety of physical, psychological, and social benefits to urban residents, but few studies have examined the influence of parks on comprehensive measures of subjective wellbeing at the city level. Using 2014 data from 44 U.S. cities, we evaluated the relationship between urban park quantity, quality, and accessibility and aggregate self-reported scores on the Gallup-Healthways Wellbeing Index (WBI), which considers five different domains of wellbeing (e.g., physical, community, social, financial, and purpose). In addition to park-related variables, our best-fitting OLS regression models selected using an information theory approach controlled for a variety of other typical geographic and socio-demographic correlates of wellbeing. Park quantity (measured as the percentage of city area covered by public parks) was among the strongest predictors of overall wellbeing, and the strength of this relationship appeared to be driven by parks’ contributions to physical and community wellbeing. Park quality (measured as per capita spending on parks) and accessibility (measured as the overall percentage of a city’s population within ½ mile of parks) were also positively associated with wellbeing, though these relationships were not significant. Results suggest that expansive park networks are linked to multiple aspects of health and wellbeing in cities and positively impact urban quality of life.

Urban green space is purported to offset greenhouse‐gas (GHG) emissions, remove air and water pollutants, cool local climate, and improve public health. To use these services, municipalities have focused efforts on designing and implementing ecosystem‐services‐based “green infrastructure” in urban environments. In some cases the environmental benefits of this infrastructure have been well documented, but they are often unclear, unquantified, and/or outweighed by potential costs. Quantifying biogeochemical processes in urban green infrastructure can improve our understanding of urban ecosystem services and disservices (negative or unintended consequences) resulting from designed urban green spaces. Here we propose a framework to integrate biogeochemical processes into designing, implementing, and evaluating the net effectiveness of green infrastructure, and provide examples for GHG mitigation, stormwater runoff mitigation, and improvements in air quality and health.