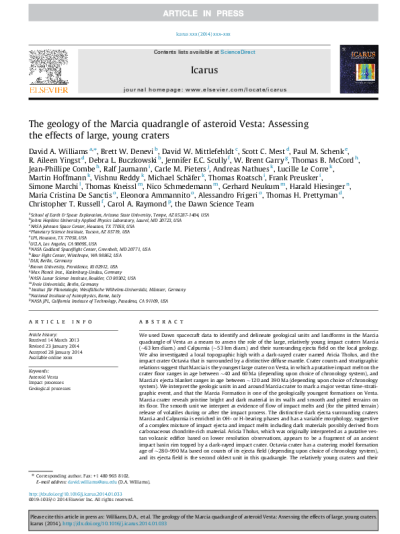 The geology of the Marcia quadrangle of asteroid Vesta: Assessing the effects of large, young craters

We used Dawn spacecraft data to identify and delineate geological units and landforms in the Marcia quadrangle of Vesta as a means to assess the role of the large, relatively…

We used Dawn spacecraft data to identify and delineate geological units and landforms in the Marcia quadrangle of Vesta as a means to assess the role of the large, relatively young impact craters Marcia (∼63 km diam.) and Calpurnia (∼53 km diam.) and their surrounding ejecta field on the local geology. We also investigated a local topographic high with a dark-rayed crater named Aricia Tholus, and the impact crater Octavia that is surrounded by a distinctive diffuse mantle. Crater counts and stratigraphic relations suggest that Marcia is the youngest large crater on Vesta, in which a putative impact melt on the crater floor ranges in age between ∼40 and 60 Ma (depending upon choice of chronology system), and Marcia’s ejecta blanket ranges in age between ∼120 and 390 Ma (depending upon choice of chronology system). We interpret the geologic units in and around Marcia crater to mark a major vestan time-stratigraphic event, and that the Marcia Formation is one of the geologically youngest formations on Vesta. Marcia crater reveals pristine bright and dark material in its walls and smooth and pitted terrains on its floor. The smooth unit we interpret as evidence of flow of impact melts and (for the pitted terrain) release of volatiles during or after the impact process. The distinctive dark ejecta surrounding craters Marcia and Calpurnia is enriched in OH- or H-bearing phases and has a variable morphology, suggestive of a complex mixture of impact ejecta and impact melts including dark materials possibly derived from carbonaceous chondrite-rich material. Aricia Tholus, which was originally interpreted as a putative vestan volcanic edifice based on lower resolution observations, appears to be a fragment of an ancient impact basin rim topped by a dark-rayed impact crater. Octavia crater has a cratering model formation age of ∼280–990 Ma based on counts of its ejecta field (depending upon choice of chronology system), and its ejecta field is the second oldest unit in this quadrangle. The relatively young craters and their related ejecta materials in this quadrangle are in stark contrast to the surrounding heavily cratered units that are related to the billion years old or older Rheasilvia and Veneneia impact basins and Vesta’s ancient crust preserved on Vestalia Terra. Oppia Quadrangle Av-10 (288–360°E, ±22°) is a junction of key geologic features that preserve a rough history of Asteroid (4) Vesta and serves as a case study of using geologic…

Oppia Quadrangle Av-10 (288–360°E, ±22°) is a junction of key geologic features that preserve a rough history of Asteroid (4) Vesta and serves as a case study of using geologic mapping to define a relative geologic timescale. Clear filter images, stereo-derived topography, slope maps, and multispectral color-ratio images from the Framing Camera on NASA’s Dawn spacecraft served as basemaps to create a geologic map and investigate the spatial and temporal relationships of the local stratigraphy. Geologic mapping reveals the oldest map unit within Av-10 is the cratered highlands terrain which possibly represents original crustal material on Vesta that was then excavated by one or more impacts to form the basin Feralia Planitia. Saturnalia Fossae and Divalia Fossae ridge and trough terrains intersect the wall of Feralia Planitia indicating that this impact basin is older than both the Veneneia and Rheasilvia impact structures, representing Pre-Veneneian crustal material. Two of the youngest geologic features in Av-10 are Lepida (∼45 km diameter) and Oppia (∼40 km diameter) impact craters that formed on the northern and southern wall of Feralia Planitia and each cross-cuts a trough terrain. The ejecta blanket of Oppia is mapped as ‘dark mantle’ material because it appears dark orange in the Framing Camera ‘Clementine-type’ color-ratio image and has a diffuse, gradational contact distributed to the south across the rim of Rheasilvia. Mapping of surface material that appears light orange in color in the Framing Camera ‘Clementine-type’ color-ratio image as ‘light mantle material’ supports previous interpretations of an impact ejecta origin. Some light mantle deposits are easily traced to nearby source craters, but other deposits may represent distal ejecta deposits (emplaced >5 crater radii away) in a microgravity environment. The Dawn Framing Camera (FC) has imaged the northern hemisphere of the Asteroid (4) Vesta at high spatial resolution and coverage. This study represents the first investigation of the overall…

The Dawn Framing Camera (FC) has imaged the northern hemisphere of the Asteroid (4) Vesta at high spatial resolution and coverage. This study represents the first investigation of the overall geology of the northern hemisphere (22–90°N, quadrangles Av-1, 2, 3, 4 and 5) using these unique Dawn mission observations. We have compiled a morphologic map and performed crater size–frequency distribution (CSFD) measurements to date the geologic units. The hemisphere is characterized by a heavily cratered surface with a few highly subdued basins up to ∼200 km in diameter. The most widespread unit is a plateau (cratered highland unit), similar to, although of lower elevation than the equatorial Vestalia Terra plateau. Large-scale troughs and ridges have regionally affected the surface. Between ∼180°E and ∼270°E, these tectonic features are well developed and related to the south pole Veneneia impact (Saturnalia Fossae trough unit), elsewhere on the hemisphere they are rare and subdued (Saturnalia Fossae cratered unit). In these pre-Rheasilvia units we observed an unexpectedly high frequency of impact craters up to ∼10 km in diameter, whose formation could in part be related to the Rheasilvia basin-forming event. The Rheasilvia impact has potentially affected the northern hemisphere also with S–N small-scale lineations, but without covering it with an ejecta blanket. Post-Rheasilvia impact craters are small (<60 km in diameter) and show a wide range of degradation states due to impact gardening and mass wasting processes. Where fresh, they display an ejecta blanket, bright rays and slope movements on walls. In places, crater rims have dark material ejecta and some crater floors are covered by ponded material interpreted as impact melt. We studied high-resolution images of asteroid Vesta's surface (~70 and 20–25 m/pixel) obtained during the High- and Low-Altitude Mapping Orbits (HAMO, LAMO) of NASA's Dawn mission to assess the formation…

We studied high-resolution images of asteroid Vesta's surface (~70 and 20–25 m/pixel) obtained during the High- and Low-Altitude Mapping Orbits (HAMO, LAMO) of NASA's Dawn mission to assess the formation mechanisms responsible for a variety of lobate, flow-like features observed across the surface. We searched for evidence of volcanic flows, based on prior mathematical modeling and the well-known basaltic nature of Vesta's crust, but no unequivocal morphologic evidence of ancient volcanic activity has thus far been identified. Rather, we find that all lobate, flow-like features on Vesta appear to be related either to impact or erosional processes. Morphologically distinct lobate features occur in and around impact craters, and most of these are interpreted as impact ejecta flows, or possibly flows of impact melt. Estimates of melt production from numerical models and scaling laws suggests that large craters like Marcia (~60 km diameter) could have potentially produced impact melt volumes ranging from tens of millions of cubic meters to a few tens of cubic kilometers, which are relatively small volumes compared to similar-sized lunar craters, but which are consistent with putative impact melt features observed in Dawn images. There are also examples of lobate flows that trend downhill both inside and outside of crater rims and basin scarps, which are interpreted as the result of gravity-driven mass movements (slumps and landslides).