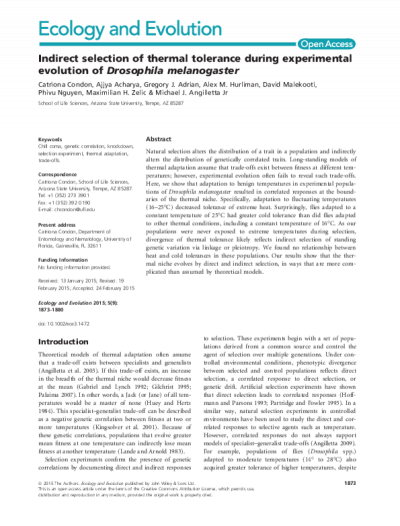 Natural selection alters the distribution of a trait in a population and indirectly alters the distribution of genetically correlated traits. Long-standing models of thermal adaptation assume that trade-offs exist between fitness at different temperatures; however, experimental evolution often fails to reveal such trade-offs. Here, we show that adaptation to benign temperatures in experimental populations of Drosophila melanogaster resulted in correlated responses at the boundaries of the thermal niche. Specifically, adaptation to fluctuating temperatures (16–25°C) decreased tolerance of extreme heat. Surprisingly, flies adapted to a constant temperature of 25°C had greater cold tolerance than did flies adapted to other thermal conditions, including a constant temperature of 16°C. As our populations were never exposed to extreme temperatures during selection, divergence of thermal tolerance likely reflects indirect selection of standing genetic variation via linkage or pleiotropy. We found no relationship between heat and cold tolerances in these populations. Our results show that the thermal niche evolves by direct and indirect selection, in ways that are more complicated than assumed by theoretical models.