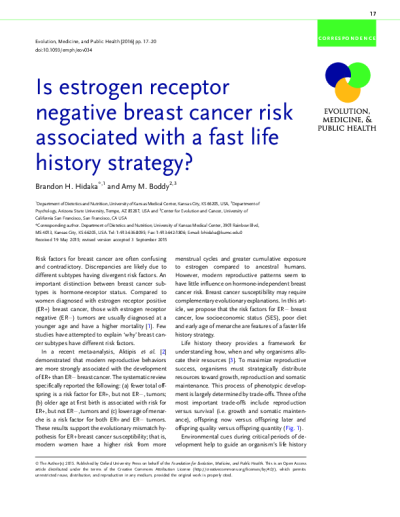 Risk factors for breast cancer are often confusing and contradictory. Discrepancies are likely due to different subtypes having divergent risk factors. An important distinction between breast cancer subtypes is hormone-receptor… 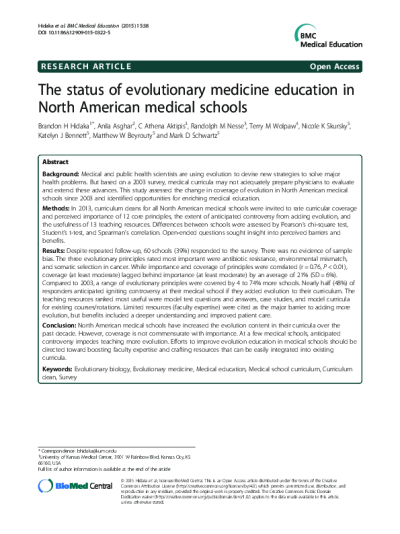 Background
Medical and public health scientists are using evolution to devise new strategies to solve major health problems. But based on a 2003 survey, medical curricula may not adequately prepare…

Background
Medical and public health scientists are using evolution to devise new strategies to solve major health problems. But based on a 2003 survey, medical curricula may not adequately prepare physicians to evaluate and extend these advances. This study assessed the change in coverage of evolution in North American medical schools since 2003 and identified opportunities for enriching medical education.
Methods
In 2013, curriculum deans for all North American medical schools were invited to rate curricular coverage and perceived importance of 12 core principles, the extent of anticipated controversy from adding evolution, and the usefulness of 13 teaching resources. Differences between schools were assessed by Pearson’s chi-square test, Student’s t-test, and Spearman’s correlation. Open-ended questions sought insight into perceived barriers and benefits.
Results
Despite repeated follow-up, 60 schools (39%) responded to the survey. There was no evidence of sample bias. The three evolutionary principles rated most important were antibiotic resistance, environmental mismatch, and somatic selection in cancer. While importance and coverage of principles were correlated (r = 0.76, P < 0.01), coverage (at least moderate) lagged behind importance (at least moderate) by an average of 21% (SD = 6%). Compared to 2003, a range of evolutionary principles were covered by 4 to 74% more schools. Nearly half (48%) of responders anticipated igniting controversy at their medical school if they added evolution to their curriculum. The teaching resources ranked most useful were model test questions and answers, case studies, and model curricula for existing courses/rotations. Limited resources (faculty expertise) were cited as the major barrier to adding more evolution, but benefits included a deeper understanding and improved patient care.
Conclusion
North American medical schools have increased the evolution content in their curricula over the past decade. However, coverage is not commensurate with importance. At a few medical schools, anticipated controversy impedes teaching more evolution. Efforts to improve evolution education in medical schools should be directed toward boosting faculty expertise and crafting resources that can be easily integrated into existing curricula.