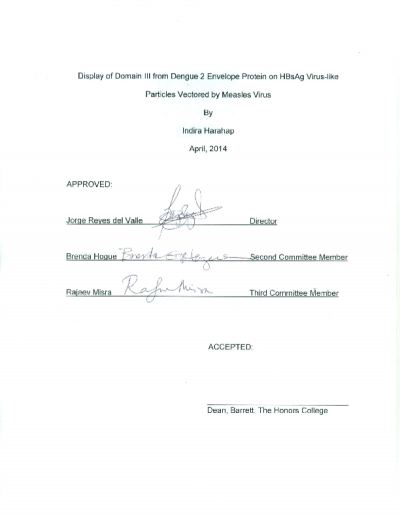 Dengue virus infects millions of people every year. Yet there is still no vaccine available to prevent it. Here we use a neutralizing epitope determinant on the dengue envelope (E)…

Dengue virus infects millions of people every year. Yet there is still no vaccine available to prevent it. Here we use a neutralizing epitope determinant on the dengue envelope (E) protein as an immunogen to be vectored by a measles virus (MV) vaccine. However the domain III (DIII) of the dengue 2 E protein is too small to be immunogenic by itself. In order for it to be displayed on a larger particle, it was inserted into the amino terminus of small hepatitis B surface antigen (HBsAg, S) coding sequence. To generate the recombinant MV vector and verify the efficiency of this concept, a reverse genetics system was used where the MV vectors express one or two additional transcription units to direct the assembly of hybrid HBsAg particles. Two types of recombinant measles virus were produced: pB(+)MVvac2(DIII-S,S)P and pB(+)MVvac2(DIII-S)N. Virus recovered from pB(+)MVvac2(DIII-S,S)P was viable. An ELISA assay was performed to demonstrate the expression and secretion of HBsAg. Supernatant from MVvac2(DIII-S,S)P infected cells confirmed that hybrid HBsAg-domain III particles with a density similar to traditional HBsAg particles were released. Characteristics of the subviral particle have been analyzed for the successful incorporation of domain III. The replication fitness of the recombinant MV was evaluated using multi-step growth kinetics and showed reduced replication fitness when compared to the parental strain MVvac2. This demonstrates that viral replication is hindered by the addition of the two inserts into MV genome. Further analysis of MVvac2(DIII-S)N is needed to justify immune response studies in a small animal model using both of the generated recombinant vectors.