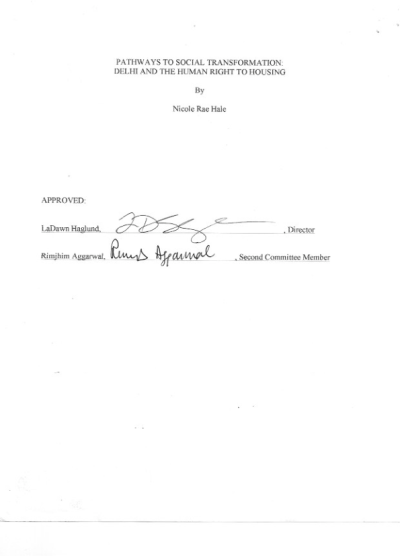 Pathways to Social Transformation: Delhi and the Human Right to Housing

The objective of this study was to better understand promising pathways to realizing human rights norms in the context of rapidly developing cities, and the role that the courts play…

The objective of this study was to better understand promising pathways to realizing human rights norms in the context of rapidly developing cities, and the role that the courts play in this process. Scholars have already started to ask these larger questions of social transformation; however, there continues to be a need for further research since the answers are vast and context-dependent. In order to contribute to these larger conversations, this project examined a key social right in Delhi \u2014 the right to housing. This study relied on interviews with key actors in Delhi's housing sector as well as a review of housing rights cases in the Delhi High Court in order to understand what mechanisms various actors utilize in the context of Delhi to realize the human right to housing on the ground. These two types of data were compared and contrasted to past research on human rights scholarship, law and social literature, and studies on urbanization. Two frameworks from these bodies of knowledge, the MAPs framework developed by Haglund and Aggarwal (2011) and the triangular framework created by Gauri and Brinks (2008), were utilized in particular to analyze interview and court data. Overall, this study found that the courts in India are advocates for housing rights, but that their advocacy is often limited, cautious, and influenced by a pattern of bias against populations without legal title to land. This study also found that communities and their allies are often more successful in realizing the right to housing when they combine litigation with other non-legal social change mechanisms. Consequently, it appears that the role of the courts in realizing ESR in Delhi is both complicated and limited, which means that pathways toward ESR realization are more promising when they incorporate non-legal mechanisms alongside court action.