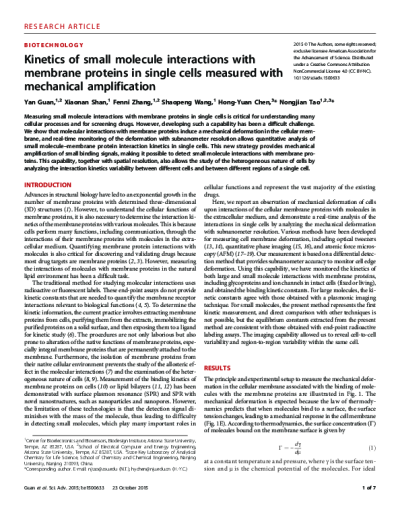 Measuring small molecule interactions with membrane proteins in single cells is critical for understanding many cellular processes and for screening drugs. However, developing such a capability has been a difficult… Detection of molecular interactions is critical for understanding many biological processes, for detecting disease biomarkers, and for screening drug candidates. Fluorescence-based approach can be problematic, especially when applied to the…

Detection of molecular interactions is critical for understanding many biological processes, for detecting disease biomarkers, and for screening drug candidates. Fluorescence-based approach can be problematic, especially when applied to the detection of small molecules. Various label-free techniques, such as surface plasmon resonance technique are sensitive to mass, making it extremely challenging to detect small molecules. In this thesis, novel detection methods for molecular interactions are described.

First, a simple detection paradigm based on reflectance interferometry is developed. This method is simple, low cost and can be easily applied for protein array detection.

Second, a label-free charge sensitive optical detection (CSOD) technique is developed for detecting of both large and small molecules. The technique is based on that most molecules relevant to biomedical research and applications are charged or partially charged. An optical fiber is dipped into the well of a microplate. It detects the surface charge of the fiber, which does not decrease with the size (mass) of the molecule, making it particularly attractive for studying small molecules.

Last, by tracking the cell membrane edge deformation, binding caused downstream event – granule secretory has been measured. This method focuses on the plasma membrane change when granules fuse with the cell. The fusion of granules increases the plasma membrane area and thus the cell edge expands. The expansion is localized at the vesicle release location. Granule size was calculated based on measured edge expansion. The membrane deformation due to the granule release is real-time monitored by this method.