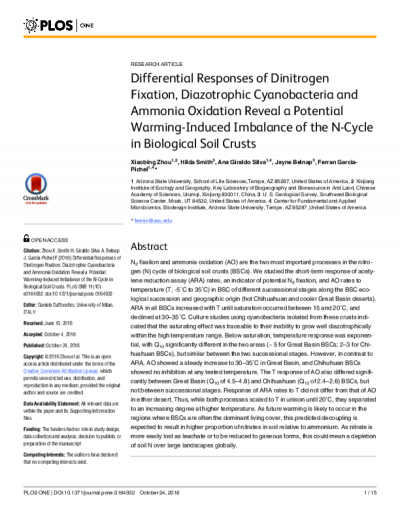 N2 fixation and ammonia oxidation (AO) are the two most important processes in the nitrogen (N) cycle of biological soil crusts (BSCs). We studied the short-term response of acetylene reduction…

N2 fixation and ammonia oxidation (AO) are the two most important processes in the nitrogen (N) cycle of biological soil crusts (BSCs). We studied the short-term response of acetylene reduction assay (ARA) rates, an indicator of potential N2 fixation, and AO rates to temperature (T, -5°C to 35°C) in BSC of different successional stages along the BSC ecological succession and geographic origin (hot Chihuahuan and cooler Great Basin deserts). ARA in all BSCs increased with T until saturation occurred between 15 and 20°C, and declined at 30–35°C. Culture studies using cyanobacteria isolated from these crusts indicated that the saturating effect was traceable to their inability to grow well diazotrophically within the high temperature range. Below saturation, temperature response was exponential, with Q10 significantly different in the two areas (~ 5 for Great Basin BSCs; 2–3 for Chihuahuan BSCs), but similar between the two successional stages. However, in contrast to ARA, AO showed a steady increase to 30–35°C in Great Basin, and Chihuhuan BSCs showed no inhibition at any tested temperature. The T response of AO also differed significantly between Great Basin (Q10 of 4.5–4.8) and Chihuahuan (Q10 of 2.4–2.6) BSCs, but not between successional stages. Response of ARA rates to T did not differ from that of AO in either desert. Thus, while both processes scaled to T in unison until 20°C, they separated to an increasing degree at higher temperature. As future warming is likely to occur in the regions where BSCs are often the dominant living cover, this predicted decoupling is expected to result in higher proportion of nitrates in soil relative to ammonium. As nitrate is more easily lost as leachate or to be reduced to gaseous forms, this could mean a depletion of soil N over large landscapes globally.