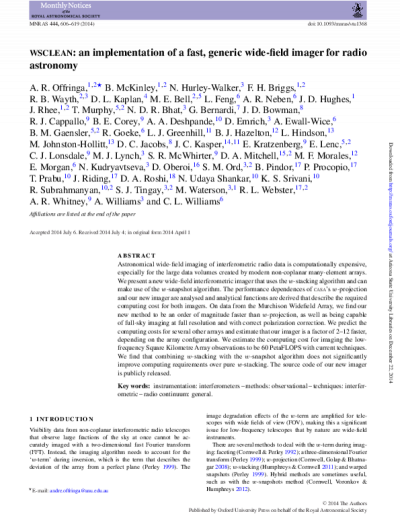 WSCLEAN: an implementation of a fast, generic wide-field imager for radio astronomy

Astronomical wide-field imaging of interferometric radio data is computationally expensive, especially for the large data volumes created by modern non-coplanar many-element arrays. We present a new wide-field interferometric imager that uses the w-stacking algorithm and can make use of the w-snapshot algorithm. The performance dependences of CASA's w-projection and our new imager are analysed and analytical functions are derived that describe the required computing cost for both imagers. On data from the Murchison Widefield Array, we find our new method to be an order of magnitude faster than w-projection, as well as being capable of full-sky imaging at full resolution and with correct polarization correction. We predict the computing costs for several other arrays and estimate that our imager is a factor of 2–12 faster, depending on the array configuration. We estimate the computing cost for imaging the low-frequency Square Kilometre Array observations to be 60 PetaFLOPS with current techniques. We find that combining w-stacking with the w-snapshot algorithm does not significantly improve computing requirements over pure w-stacking. The source code of our new imager is publicly released. 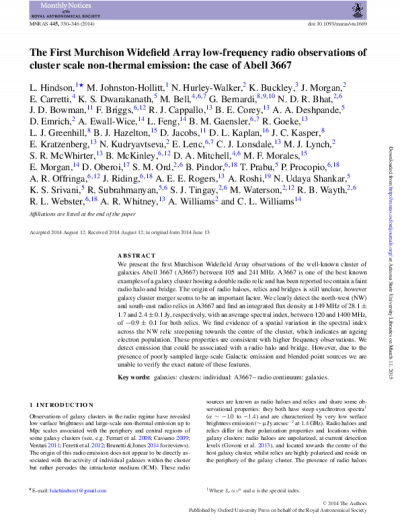 We present the first Murchison Widefield Array observations of the well-known cluster of galaxies Abell 3667 (A3667) between 105 and 241 MHz. A3667 is one of the best known examples of…

We present the first Murchison Widefield Array observations of the well-known cluster of galaxies Abell 3667 (A3667) between 105 and 241 MHz. A3667 is one of the best known examples of a galaxy cluster hosting a double radio relic and has been reported to contain a faint radio halo and bridge. The origin of radio haloes, relics and bridges is still unclear, however galaxy cluster merger seems to be an important factor. We clearly detect the north-west (NW) and south-east radio relics in A3667 and find an integrated flux density at 149 MHz of 28.1 ± 1.7 and 2.4 ± 0.1 Jy, respectively, with an average spectral index, between 120 and 1400 MHz, of −0.9 ± 0.1 for both relics. We find evidence of a spatial variation in the spectral index across the NW relic steepening towards the centre of the cluster, which indicates an ageing electron population. These properties are consistent with higher frequency observations. We detect emission that could be associated with a radio halo and bridge. However, due to the presence of poorly sampled large-scale Galactic emission and blended point sources we are unable to verify the exact nature of these features.