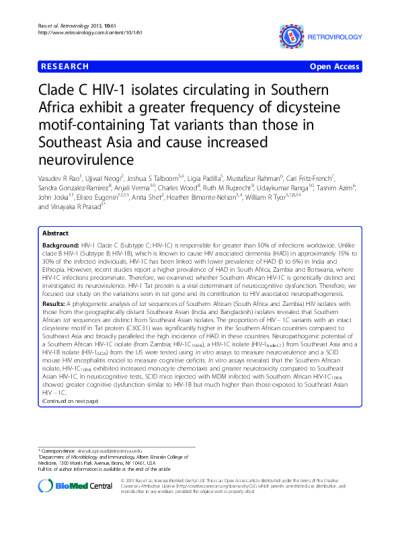 Background: HIV-1 Clade C (Subtype C; HIV-1C) is responsible for greater than 50% of infections worldwide. Unlike clade B HIV-1 (Subtype B; HIV-1B), which is known to cause HIV associated…

Background: HIV-1 Clade C (Subtype C; HIV-1C) is responsible for greater than 50% of infections worldwide. Unlike clade B HIV-1 (Subtype B; HIV-1B), which is known to cause HIV associated dementia (HAD) in approximately 15% to 30% of the infected individuals, HIV-1C has been linked with lower prevalence of HAD (0 to 6%) in India and Ethiopia. However, recent studies report a higher prevalence of HAD in South Africa, Zambia and Botswana, where HIV-1C infections predominate. Therefore, we examined whether Southern African HIV-1C is genetically distinct and investigated its neurovirulence. HIV-1 Tat protein is a viral determinant of neurocognitive dysfunction. Therefore, we focused our study on the variations seen in tat gene and its contribution to HIV associated neuropathogenesis. Results: A phylogenetic analysis of tat sequences of Southern African (South Africa and Zambia) HIV isolates with those from the geographically distant Southeast Asian (India and Bangladesh) isolates revealed that Southern African tat sequences are distinct from Southeast Asian isolates. The proportion of HIV - 1C variants with an intact dicysteine motif in Tat protein (C30C31) was significantly higher in the Southern African countries compared to Southeast Asia and broadly paralleled the high incidence of HAD in these countries. Neuropathogenic potential of a Southern African HIV-1C isolate (from Zambia; HIV-1C(1084i)), a HIV-1C isolate (HIV-1(IndieC1)) from Southeast Asia and a HIV-1B isolate (HIV-1(ADA)) from the US were tested using in vitro assays to measure neurovirulence and a SCID mouse HIV encephalitis model to measure cognitive deficits. In vitro assays revealed that the Southern African isolate, HIV-1C(1084i) exhibited increased monocyte chemotaxis and greater neurotoxicity compared to Southeast Asian HIV-1C. In neurocognitive tests, SCID mice injected with MDM infected with Southern African HIV-1C(1084i) showed greater cognitive dysfunction similar to HIV-1B but much higher than those exposed to Southeast Asian HIV - 1C. Conclusions: We report here, for the first time, that HIV-1C from Southern African countries is genetically distinct from Southeast Asian HIV-1C and that it exhibits a high frequency of variants with dicysteine motif in a key neurotoxic HIV protein, Tat. Our results indicate that Tat dicysteine motif determines neurovirulence. If confirmed in population studies, it may be possible to predict neurocognitive outcomes of individuals infected with HIV-1C by genotyping Tat.