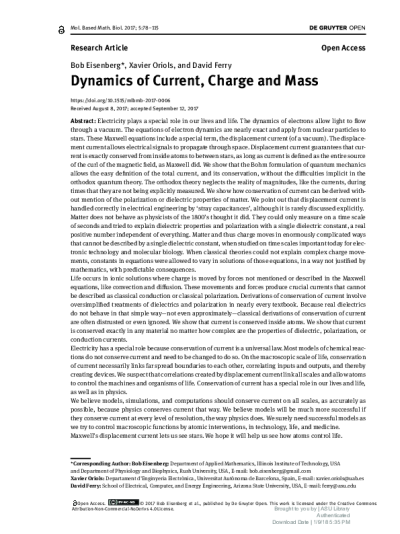 Dynamics of Current, Charge and Mass

Electricity plays a special role in our lives and life. The dynamics of electrons allow light to flow through a vacuum. The equations of electron dynamics are nearly exact and…

Electricity plays a special role in our lives and life. The dynamics of electrons allow light to flow through a vacuum. The equations of electron dynamics are nearly exact and apply from nuclear particles to stars. These Maxwell equations include a special term, the displacement current (of a vacuum). The displacement current allows electrical signals to propagate through space. Displacement current guarantees that current is exactly conserved from inside atoms to between stars, as long as current is defined as the entire source of the curl of the magnetic field, as Maxwell did.We show that the Bohm formulation of quantum mechanics allows the easy definition of the total current, and its conservation, without the dificulties implicit in the orthodox quantum theory. The orthodox theory neglects the reality of magnitudes, like the currents, during times that they are not being explicitly measured.We show how conservation of current can be derived without mention of the polarization or dielectric properties of matter. We point out that displacement current is handled correctly in electrical engineering by ‘stray capacitances’, although it is rarely discussed explicitly. Matter does not behave as physicists of the 1800’s thought it did. They could only measure on a time scale of seconds and tried to explain dielectric properties and polarization with a single dielectric constant, a real positive number independent of everything. Matter and thus charge moves in enormously complicated ways that cannot be described by a single dielectric constant,when studied on time scales important today for electronic technology and molecular biology. When classical theories could not explain complex charge movements, constants in equations were allowed to vary in solutions of those equations, in a way not justified by mathematics, with predictable consequences. Life occurs in ionic solutions where charge is moved by forces not mentioned or described in the Maxwell equations, like convection and diffusion. These movements and forces produce crucial currents that cannot be described as classical conduction or classical polarization. Derivations of conservation of current involve oversimplified treatments of dielectrics and polarization in nearly every textbook. Because real dielectrics do not behave in that simple way-not even approximately-classical derivations of conservation of current are often distrusted or even ignored. We show that current is conserved inside atoms. We show that current is conserved exactly in any material no matter how complex are the properties of dielectric, polarization, or conduction currents. Electricity has a special role because conservation of current is a universal law.Most models of chemical reactions do not conserve current and need to be changed to do so. On the macroscopic scale of life, conservation of current necessarily links far spread boundaries to each other, correlating inputs and outputs, and thereby creating devices.We suspect that correlations created by displacement current link all scales and allow atoms to control the machines and organisms of life. Conservation of current has a special role in our lives and life, as well as in physics. We believe models, simulations, and computations should conserve current on all scales, as accurately as possible, because physics conserves current that way. We believe models will be much more successful if they conserve current at every level of resolution, the way physics does.We surely need successful models as we try to control macroscopic functions by atomic interventions, in technology, life, and medicine. Maxwell’s displacement current lets us see stars. We hope it will help us see how atoms control life.