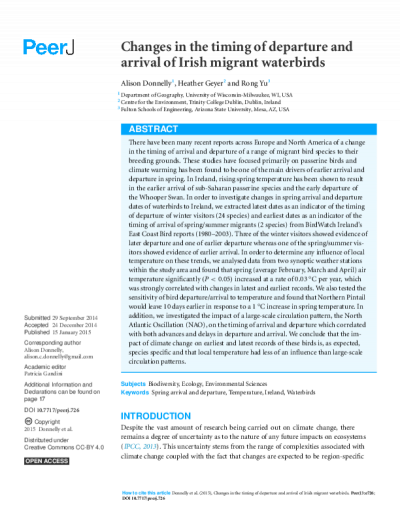 There have been many recent reports across Europe and North America of a change in the timing of arrival and departure of a range of migrant bird species to their breeding grounds. These studies have focused primarily on passerine birds and climate warming has been found to be one of the main drivers of earlier arrival and departure in spring. In Ireland, rising spring temperature has been shown to result in the earlier arrival of sub-Saharan passerine species and the early departure of the Whooper Swan. In order to investigate changes in spring arrival and departure dates of waterbirds to Ireland, we extracted latest dates as an indicator of the timing of departure of winter visitors (24 species) and earliest dates as an indicator of the timing of arrival of spring/summer migrants (2 species) from BirdWatch Ireland’s East Coast Bird reports (1980–2003). Three of the winter visitors showed evidence of later departure and one of earlier departure whereas one of the spring/summer visitors showed evidence of earlier arrival. In order to determine any influence of local temperature on these trends, we analysed data from two synoptic weather stations within the study area and found that spring (average February, March and April) air temperature significantly (P < 0.05) increased at a rate of 0.03 °C per year, which was strongly correlated with changes in latest and earliest records. We also tested the sensitivity of bird departure/arrival to temperature and found that Northern Pintail would leave 10 days earlier in response to a 1 °C increase in spring temperature. In addition, we investigated the impact of a large-scale circulation pattern, the North Atlantic Oscillation (NAO), on the timing of arrival and departure which correlated with both advances and delays in departure and arrival. We conclude that the impact of climate change on earliest and latest records of these birds is, as expected, species specific and that local temperature had less of an influence than large-scale circulation patterns.