Post-exposure vaccination with vaccinia virus (VACV) has been suggested to be effective in minimizing death if administered within four days of smallpox exposure. While there is anecdotal evidence for efficacy…

Post-exposure vaccination with vaccinia virus (VACV) has been suggested to be effective in minimizing death if administered within four days of smallpox exposure. While there is anecdotal evidence for efficacy of post-exposure vaccination this has not been definitively studied in humans. In this study, we analyzed post-exposure prophylaxis using several attenuated recombinant VACV in a mouse model. A recombinant VACV expressing murine interferon gamma (IFN-γ) was most effective for post-exposure protection of mice infected with VACV and ectromelia virus (ECTV). Untreated animals infected with VACV exhibited severe weight loss and morbidity leading to 100% mortality by 8 to 10 days post-infection. Animals treated one day post-infection had milder symptoms, decreased weight loss and morbidity, and 100% survival. Treatment on days 2 or 3 post-infection resulted in 40% and 20% survival, respectively. Similar results were seen in ECTV-infected mice. Despite the differences in survival rates in the VACV model, the viral load was similar in both treated and untreated mice while treated mice displayed a high level of IFN-γ in the serum. These results suggest that protection provided by IFN-γ expressed by VACV may be mediated by its immunoregulatory activities rather than its antiviral effects. These results highlight the importance of IFN-γ as a modulator of the immune response for post-exposure prophylaxis and could be used potentially as another post-exposure prophylaxis tool to prevent morbidity following infection with smallpox and other orthopoxviruses.

The botanical, Astragalus membranaceus, is a therapeutic in traditional Chinese medicine. Limited literature exists on the overall in vivo effects of A. membranaceus on the human body. This study evaluates…

The botanical, Astragalus membranaceus, is a therapeutic in traditional Chinese medicine. Limited literature exists on the overall in vivo effects of A. membranaceus on the human body. This study evaluates the physiological responses to A. membranaceus by measuring leukocyte, platelet, and cytokine responses as well as body temperature and blood pressure in healthy individuals after the in vivo administration of A. membranaceus. A dose-dependent increase in monocytes, neutrophils, and lymphocytes was measured 8–12 hours after administration and an increase in the number of circulating platelets was seen as early as 4 hours. A dynamic change in the levels of circulating cytokines was observed, especially in interferon-γ and tumor necrosis factor-α, IL-13, IL-6, and soluble IL-2R. Subjective symptoms reported by participants were similar to those typically experienced in viral type immune responses and included fatigue, malaise, and headache. Systolic and diastolic blood pressure were reduced within 4 hours after administration, while body temperature mildly increased within 8 hours after administration. In general, all responses returned to baseline values by 24 hours. Collectively, these results support the role of A. membranaceus in priming for a potential immune response as well as its effect on blood flow and wound healing. Viral infections are a significant cause of disease in humans. While some viral diseases have been eliminated, many more continue to infect millions. Viral infections are challenging to treat because viruses use host cell machinery to replicate, so it is difficult to develop drugs that can target viruses. Normally, the host’s immune system is capable of destroying the virus, but during chronic infections it becomes exhausted and T cells lose their effector functions necessary for the clearance of the virus. IL-2 can help relieve this exhaustion, but causes toxicity to the body. In mice infected with chronic LCMV, IL-2 administration causes death due to pulmonary hemorrhage. CD4 deficient mice were infected with chronic LCMV and then dosed with IL-2 and survived, but mice that were deficient for CD8 T cells died, indicating that toxicity was mediated by CD8 T cells. CD8 T cells can kill infected host cells directly by producing perforin, or can produce cytokines like IFN-γ and TNF to further activate the immune system and mediate killing. Mice that were deficient in perforin died after IL-2 administration, as well as mice that were deficient in IFN-γ. Mice deficient in TNF, however, survived, indicating that TNF was mediating the toxicity in response to IL-2. There are two different receptors for TNF, p55 and p75. p55 is known as TNFR1 and has been implicated in apoptosis of virally infected cells. P75 is known as TNFR2 and is associated more with inflammation in response to infection. My hypothesis was that if TNFR2 was knocked out, infected mice would survive IL-2 dosing. When single knockouts of TNFR1 and 2 were used in an experiment however, it was found that either receptor is capable of mediating toxicity, as both experimental groups failed to survive. This is relevant to current IL-2 therapies because there is no way to eliminate a single receptor in order to reduce toxicity. Further studies exploring the anti-viral capabilities of IFN-γ are suggested. In Vitro Characterization of a Nineteenth-Century Therapy for Smallpox

In the nineteenth century, smallpox ravaged through the United States and Canada. At this time, a botanical preparation, derived from the carnivorous plant Sarracenia purpurea, was proclaimed as being a…

In the nineteenth century, smallpox ravaged through the United States and Canada. At this time, a botanical preparation, derived from the carnivorous plant Sarracenia purpurea, was proclaimed as being a successful therapy for smallpox infections. The work described characterizes the antipoxvirus activity associated with this botanical extract against vaccinia virus, monkeypox virus and variola virus, the causative agent of smallpox. Our work demonstrates the in vitro characterization of Sarracenia purpurea as the first effective inhibitor of poxvirus replication at the level of early viral transcription. With the renewed threat of poxvirus-related infections, our results indicate Sarracenia purpurea may act as another defensive measure against Orthopoxvirus infections. 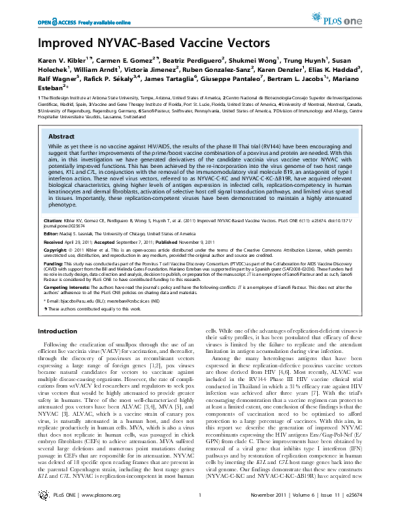 While as yet there is no vaccine against HIV/AIDS, the results of the phase III Thai trial (RV144) have been encouraging and suggest that further improvements of the prime/boost vaccine…

While as yet there is no vaccine against HIV/AIDS, the results of the phase III Thai trial (RV144) have been encouraging and suggest that further improvements of the prime/boost vaccine combination of a poxvirus and protein are needed. With this aim, in this investigation we have generated derivatives of the candidate vaccinia virus vaccine vector NYVAC with potentially improved functions. This has been achieved by the re-incorporation into the virus genome of two host range genes, K1L and C7L, in conjunction with the removal of the immunomodulatory viral molecule B19, an antagonist of type I interferon action. These novel virus vectors, referred to as NYVAC-C-KC and NYVAC-C-KC-ΔB19R, have acquired relevant biological characteristics, giving higher levels of antigen expression in infected cells, replication-competency in human keratinocytes and dermal fibroblasts, activation of selective host cell signal transduction pathways, and limited virus spread in tissues. Importantly, these replication-competent viruses have been demonstrated to maintain a highly attenuated phenotype.