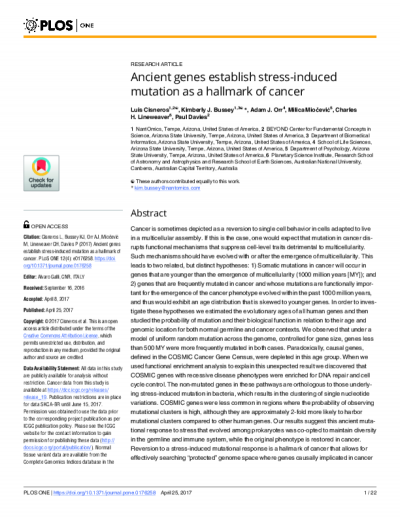 Ancient Genes Establish Stress-Induced Mutation as a Hallmark of Cancer

Cancer is sometimes depicted as a reversion to single cell behavior in cells adapted to live in a multicellular assembly. If this is the case, one would expect that mutation…

Cancer is sometimes depicted as a reversion to single cell behavior in cells adapted to live in a multicellular assembly. If this is the case, one would expect that mutation in cancer disrupts functional mechanisms that suppress cell-level traits detrimental to multicellularity. Such mechanisms should have evolved with or after the emergence of multicellularity. This leads to two related, but distinct hypotheses: 1) Somatic mutations in cancer will occur in genes that are younger than the emergence of multicellularity (1000 million years [MY]); and 2) genes that are frequently mutated in cancer and whose mutations are functionally important for the emergence of the cancer phenotype evolved within the past 1000 million years, and thus would exhibit an age distribution that is skewed to younger genes. In order to investigate these hypotheses we estimated the evolutionary ages of all human genes and then studied the probability of mutation and their biological function in relation to their age and genomic location for both normal germline and cancer contexts.

We observed that under a model of uniform random mutation across the genome, controlled for gene size, genes less than 500 MY were more frequently mutated in both cases. Paradoxically, causal genes, defined in the COSMIC Cancer Gene Census, were depleted in this age group. When we used functional enrichment analysis to explain this unexpected result we discovered that COSMIC genes with recessive disease phenotypes were enriched for DNA repair and cell cycle control. The non-mutated genes in these pathways are orthologous to those underlying stress-induced mutation in bacteria, which results in the clustering of single nucleotide variations. COSMIC genes were less common in regions where the probability of observing mutational clusters is high, although they are approximately 2-fold more likely to harbor mutational clusters compared to other human genes. Our results suggest this ancient mutational response to stress that evolved among prokaryotes was co-opted to maintain diversity in the germline and immune system, while the original phenotype is restored in cancer. Reversion to a stress-induced mutational response is a hallmark of cancer that allows for effectively searching “protected” genome space where genes causally implicated in cancer are located and underlies the high adaptive potential and concomitant therapeutic resistance that is characteristic of cancer. 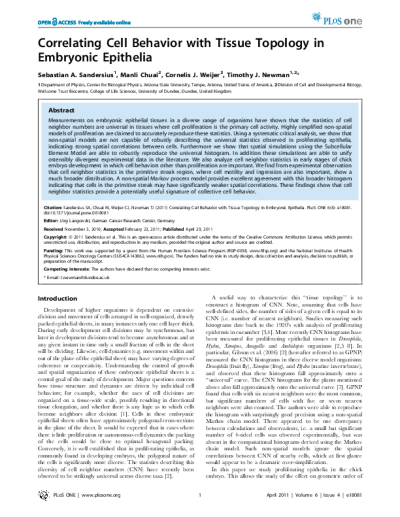 Measurements on embryonic epithelial tissues in a diverse range of organisms have shown that the statistics of cell neighbor numbers are universal in tissues where cell proliferation is the primary cell activity. Highly simplified non-spatial models of proliferation are claimed to accurately reproduce these statistics. Using a systematic critical analysis, we show that non-spatial models are not capable of robustly describing the universal statistics observed in proliferating epithelia, indicating strong spatial correlations between cells. Furthermore we show that spatial simulations using the Subcellular Element Model are able to robustly reproduce the universal histogram. In addition these simulations are able to unify ostensibly divergent experimental data in the literature. We also analyze cell neighbor statistics in early stages of chick embryo development in which cell behaviors other than proliferation are important. We find from experimental observation that cell neighbor statistics in the primitive streak region, where cell motility and ingression are also important, show a much broader distribution. A non-spatial Markov process model provides excellent agreement with this broader histogram indicating that cells in the primitive streak may have significantly weaker spatial correlations. These findings show that cell neighbor statistics provide a potentially useful signature of collective cell behavior. 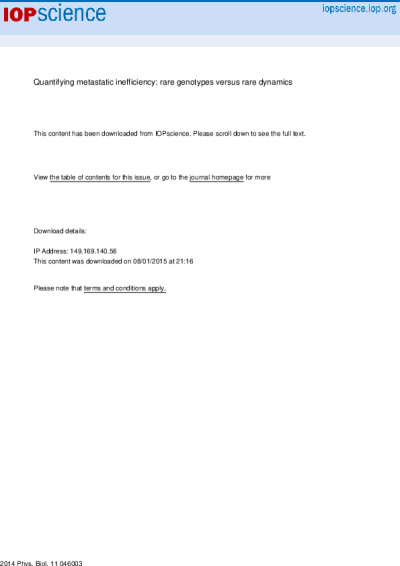 We introduce and solve a ‘null model’ of stochastic metastatic colonization. The model is described by a single parameter θ: the ratio of the rate of cell division to the…

We introduce and solve a ‘null model’ of stochastic metastatic colonization. The model is described by a single parameter θ: the ratio of the rate of cell division to the rate of cell death for a disseminated tumour cell in a given secondary tissue environment. We are primarily interested in the case in which colonizing cells are poorly adapted for proliferation in the local tissue environment, so that cell death is more likely than cell division, i.e. θ < 1. We quantify the rare event statistics for the successful establishment of a metastatic colony of size N. For N ≫ 1, we find that the probability of establishment is exponentially rare, as expected, and yet the mean time for such rare events is of the form ∼ log (N)/(1 − θ) while the standard deviation of colonization times is ∼1/(1 − θ). Thus, counter to naive expectation, for θ < 1, the average time for establishment of successful metastatic colonies decreases with decreasing cell fitness, and colonies seeded from lower fitness cells show less stochastic variation in their growth. These results indicate that metastatic growth from poorly adapted cells is rare, exponentially explosive and essentially deterministic. These statements are brought into sharper focus by the finding that the temporal statistics of the early stages of metastatic colonization from low-fitness cells (θ < 1) are statistically indistinguishable from those initiated from high-fitness cells (θ > 1), i.e. the statistics show a duality mapping (1 − θ) → (θ − 1). We conclude our analysis with a study of heterogeneity in the fitness of colonising cells, and describe a phase diagram delineating parameter regions in which metastatic colonization is dominated either by low or high fitness cells, showing that both are plausible given our current knowledge of physiological conditions in human cancer.