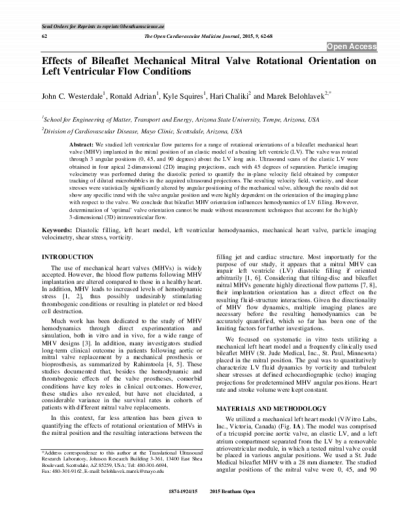 We studied left ventricular flow patterns for a range of rotational orientations of a bileaflet mechanical heart valve (MHV) implanted in the mitral position of an elastic model of a beating left ventricle (LV). The valve was rotated through 3 angular positions (0, 45, and 90 degrees) about the LV long axis. Ultrasound scans of the elastic LV were obtained in four apical 2-dimensional (2D) imaging projections, each with 45 degrees of separation. Particle imaging velocimetry was performed during the diastolic period to quantify the in-plane velocity field obtained by computer tracking of diluted microbubbles in the acquired ultrasound projections. The resulting velocity field, vorticity, and shear stresses were statistically significantly altered by angular positioning of the mechanical valve, although the results did not show any specific trend with the valve angular position and were highly dependent on the orientation of the imaging plane with respect to the valve. We conclude that bileaflet MHV orientation influences hemodynamics of LV filling. However, determination of ‘optimal’ valve orientation cannot be made without measurement techniques that account for the highly 3-dimensional (3D) intraventricular flow.