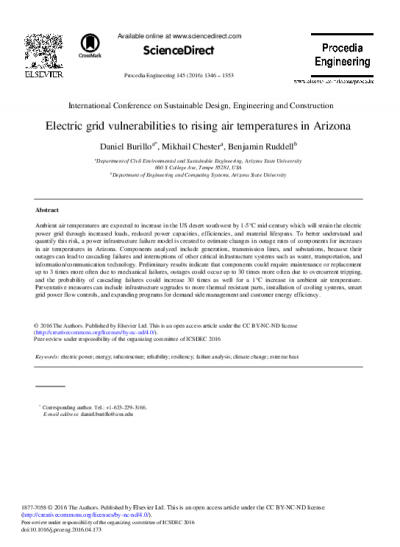 Ambient air temperatures are expected to increase in the US desert southwest by 1-5 °C mid-century which will strain the electric power grid through increased loads, reduced power capacities, efficiencies,…

Ambient air temperatures are expected to increase in the US desert southwest by 1-5 °C mid-century which will strain the electric power grid through increased loads, reduced power capacities, efficiencies, and material lifespans. To better understand and quantify this risk, a power infrastructure failure model is created to estimate changes in outage rates of components for increases in air temperatures in Arizona. Components analyzed include generation, transmission lines, and substations, because their outages can lead to cascading failures and interruptions of other critical infrastructure systems such as water, transportation, and information/communication technology. Preliminary results indicate that components could require maintenance or replacement up to 3 times more often due to mechanical failures, outages could occur up to 30 times more often due to overcurrent tripping, and the probability of cascading failures could increase 30 times as well for a 1 °C increase in ambient air temperature. Preventative measures can include infrastructure upgrades to more thermal resistant parts, installation of cooling systems, smart grid power flow controls, and expanding programs for demand side management and customer energy efficiency.

Phoenix is the sixth most populated city in the United States and the 12th largest metropolitan area by population, with about 4.4 million people. As the region continues to grow,…

Phoenix is the sixth most populated city in the United States and the 12th largest metropolitan area by population, with about 4.4 million people. As the region continues to grow, the demand for housing and jobs within the metropolitan area is projected to rise under uncertain climate conditions.

Undergraduate and graduate students from Engineering, Sustainability, and Urban Planning in ASU’s Urban Infrastructure Anatomy and Sustainable Development course evaluated the water, energy, and infrastructure changes that result from smart growth in Phoenix, Arizona. The Maricopa Association of Government's Sustainable Transportation and Land Use Integration Study identified a market for 485,000 residential dwelling units in the urban core. Household water and energy use changes, changes in infrastructure needs, and financial and economic savings are assessed along with associated energy use and greenhouse gas emissions.

The course project has produced data on sustainable development in Phoenix and the findings will be made available through ASU’s Urban Sustainability Lab. 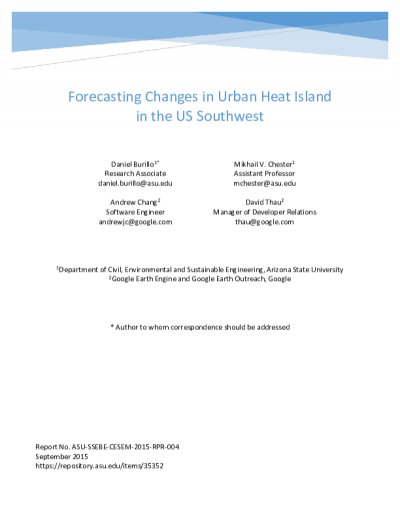 Forecasting Changes in Urban Heat Island in the US Southwest

Recent developments in computational software and public accessibility of gridded climatological data have enabled researchers to study Urban Heat Island (UHI) effects more systematically and at a higher spatial resolution. Previous studies have analyzed UHI and identified significant contributors at the regional level for cities, within the topology of urban canyons, and for different construction materials.

In UHIs, air is heated by the convective energy transfer from land surface materials and anthropogenic activities. Convection is dependent upon the temperature of the surface, temperature of the air, wind speed, and relative humidity. At the same time, air temperature is also influenced by greenhouse gases (GHG) in the atmosphere. Climatologists project a 1-5°C increase in near-surface air temperature over the next several decades, and 1-4°C specifically for Los Angeles and Maricopa during summertime due to GHG effects. With higher ambient air temperatures, we seek to understand how convection will change in cities and to what ends.

In this paper we develop a spatially explicit methodology for quantifying UHI by estimating the daily convection thermal energy transfer from land to air using publicly-available gridded climatological data, and we estimate how much additional energy will be retained due to lack of convective cooling in scenarios of higher ambient air temperature. Electricity infrastructure vulnerabilities were assessed for future heat waves due to climate change. Critical processes and component relationships were identified and characterized with consideration for the terminal event of service…

Electricity infrastructure vulnerabilities were assessed for future heat waves due to climate change. Critical processes and component relationships were identified and characterized with consideration for the terminal event of service outages, including cascading failures in transmission-level components that can result in blackouts. The most critical dependency identified was the increase in peak electricity demand with higher air temperatures. Historical and future air temperatures were characterized within and across Los Angeles County, California (LAC) and Maricopa County (Phoenix), Arizona. LAC was identified as more vulnerable to heat waves than Phoenix due to a wider distribution of historical temperatures. Two approaches were developed to estimate peak demand based on air temperatures, a top-down statistical model and bottom-up spatial building energy model. Both approaches yielded similar results, in that peak demand should increase sub-linearly at temperatures above 40°C (104 °F) due to saturation in the coincidence of air conditioning (AC) duty cycles. Spatial projections for peak demand were developed for LAC to 2060 considering potential changes in population, building type, building efficiency, AC penetration, appliance efficiency, and air temperatures due climate change. These projections were spatially allocated to delivery system components (generation, transmission lines, and substations) to consider their vulnerability in terms of thermal de-rated capacity and weather adjusted load factor (load divided by capacity). Peak hour electricity demand was projected to increase in residential and commercial sectors by 0.2–6.5 GW (2–51%) by 2060. All grid components, except those near Santa Monica Beach, were projected to experience 2–20% capacity loss due to air temperatures exceeding 40 °C (104 °F). Based on scenario projections, and substation load factors for Southern California Edison (SCE), SCE will require 848—6,724 MW (4-32%) of additional substation capacity or peak shaving in its LAC service territories by 2060 to meet additional demand associated with population growth projections.