Asteroids provide fundamental clues to the formation and evolution of planetesimals. Collisional models based on the depletion of the primordial main belt of asteroids predict 10–15 craters >400 km should have…

Asteroids provide fundamental clues to the formation and evolution of planetesimals. Collisional models based on the depletion of the primordial main belt of asteroids predict 10–15 craters >400 km should have formed on Ceres, the largest object between Mars and Jupiter, over the last 4.55 Gyr. Likewise, an extrapolation from the asteroid Vesta would require at least 6–7 such basins. However, Ceres’ surface appears devoid of impact craters >∼280 km. Here, we show a significant depletion of cerean craters down to 100–150 km in diameter. The overall scarcity of recognizable large craters is incompatible with collisional models, even in the case of a late implantation of Ceres in the main belt, a possibility raised by the presence of ammoniated phyllosilicates. Our results indicate that a significant population of large craters has been obliterated, implying that long-wavelength topography viscously relaxed or that Ceres experienced protracted widespread resurfacing. 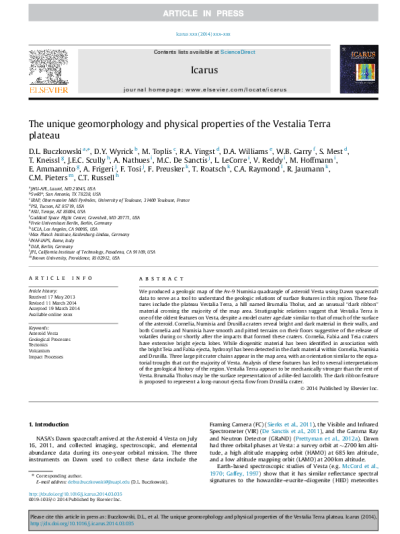 Vesta is a unique, intermediate class of rocky body in the Solar System, between terrestrial planets and small asteroids, because of its size (average radius of ∼263 km) and differentiation,…

Vesta is a unique, intermediate class of rocky body in the Solar System, between terrestrial planets and small asteroids, because of its size (average radius of ∼263 km) and differentiation, with a crust, mantle and core. Vesta’s low surface gravity (0.25 m/s[superscript 2]) has led to the continual absence of a protective atmosphere and consequently impact cratering and impact-related processes are prevalent. Previous work has shown that the formation of the Rheasilvia impact basin induced the equatorial Divalia Fossae, whereas the formation of the Veneneia impact basin induced the northern Saturnalia Fossae. Expanding upon this earlier work, we conducted photogeologic mapping of the Saturnalia Fossae, adjacent structures and geomorphic units in two of Vesta’s northern quadrangles: Caparronia and Domitia. Our work indicates that impact processes created and/or modified all mapped structures and geomorphic units. The mapped units, ordered from oldest to youngest age based mainly on cross-cutting relationships, are: (1) Vestalia Terra unit, (2) cratered highlands unit, (3) Saturnalia Fossae trough unit, (4) Saturnalia Fossae cratered unit, (5) undifferentiated ejecta unit, (6) dark lobate unit, (7) dark crater ray unit and (8) lobate crater unit. The Saturnalia Fossae consist of five separate structures: Saturnalia Fossa A is the largest (maximum width of ∼43 km) and is interpreted as a graben, whereas Saturnalia Fossa B-E are smaller (maximum width of ∼15 km) and are interpreted as half grabens formed by synthetic faults. Smaller, second-order structures (maximum width of <1 km) are distinguished from the Saturnalia Fossae, a first-order structure, by the use of the general descriptive term ‘adjacent structures’, which encompasses minor ridges, grooves and crater chains. For classification purposes, the general descriptive term ‘minor ridges’ characterizes ridges that are not part of the Saturnalia Fossae and are an order of magnitude smaller (maximum width of <1 km vs. maximum width of ∼43 km). Shear deformation resulting from the large-scale (diameter of <100 km) Rheasilvia impact is proposed to form minor ridges (∼2 km to ∼25 km in length), which are interpreted as the surface expression of thrust faults, as well as grooves (∼3 km to ∼25 km in length) and pit crater chains (∼1 km to ∼25 km in length), which are interpreted as the surface expression of extension fractures and/or dilational normal faults. Secondary crater material, ejected from small-scale and medium-scale impacts (diameters of <100 km), are interpreted to form ejecta ray systems of grooves and crater chains by bouncing and scouring across the surface. Furthermore, seismic shaking, also resulting from small-scale and medium-scale impacts, is interpreted to form minor ridges because seismic shaking induces flow of regolith, which subsequently accumulates as minor ridges that are roughly parallel to the regional slope. In this work we expand upon the link between impact processes and structural features on Vesta by presenting findings of a photogeologic, structural mapping study which highlights how impact cratering and impact-related processes are expressed on this unique, intermediate Solar System body.