Previous empirical evaluations of training programs aimed at improving dog adoption rates assume that dogs exhibiting certain behaviors are more adoptable. However, no systematic data are available to indicate that…

Previous empirical evaluations of training programs aimed at improving dog adoption rates assume that dogs exhibiting certain behaviors are more adoptable. However, no systematic data are available to indicate that the spontaneous behavior of shelter dogs has an effect on adopter preference. The aim of the present study was to determine whether any behaviors that dogs exhibit spontaneously in the presence of potential adopters were associated with the dogs' length of stay in the shelter. A sample of 289 dogs was videotaped for 1 min daily throughout their stay at a county shelter. To account for differences in adopter behavior, experimenters varied from solitary passive observers to pairs of interactive observers. Dogs behaved more attentively to active observers. To account for adopter preference for morphology, dogs were divided into “morphologically preferred” and “non-preferred” groups. Morphologically preferred dogs were small, long coated, ratters, herders, and lap dogs. No theoretically significant differences in behavior were observed between the two different dog morphologies. When accounting for morphological preference, three behaviors were found to have a significant effect on length of stay in all dogs: leaning or rubbing on the enclosure wall (increased median length of stay by 30 days), facing away from the front of the enclosure (increased by 15 days), and standing (increased by 7 days). When combinations of behaviors were assessed, back and forth motion was found to predict a longer stay (increased by 24 days). No consistent behavioral changes were observed due to time spent at the shelter. These findings will allow shelters to focus behavioral modification efforts only on behaviors likely to influence adopters' choices. A Guide to Financial Mathematics

A Guide to Financial Mathematics is a comprehensive and easy-to-use study guide for students studying for the one of the first actuarial exams, Exam FM. While there are many resources…

A Guide to Financial Mathematics is a comprehensive and easy-to-use study guide for students studying for the one of the first actuarial exams, Exam FM. While there are many resources available to students to study for these exams, this study is free to the students and offers an approach to the material similar to that of which is presented in class at ASU. The guide is available to students and professors in the new Actuarial Science degree program offered by ASU. There are twelve chapters, including financial calculator tips, detailed notes, examples, and practice exercises. Included at the end of the guide is a list of referenced material.

What Life Tables Can Tell Us about Disease

In this project, we aim to examine the methods used to obtain U.S. mortality rates, as well as the changes in the mortality rate between subgroups of interest within our population due to various diseases. Standardized testing plays a pivotal role in education. The results of standardized testing are used as performance metrics for students, teachers, and schools. The goal in education is to use performance metrics that are as accurate as possible. There are numerous measurement methods, but a popular choice is Student Growth Percentiles. This study will provide an analysis of Student Growth Percentiles in the Chandler Unified School District, located in Arizona. This study will use the Chandler Unified School District data to calculate standard error measurements and create Student Growth Percentile confidence intervals. This paper investigates whether measures of investor sentiment can be used to predict future total returns of the S&P 500 index. Rolling regressions and other statistical techniques are used to…

This paper investigates whether measures of investor sentiment can be used to predict future total returns of the S&P 500 index. Rolling regressions and other statistical techniques are used to determine which indicators contain the most predictive information and which time horizons' returns are "easiest" to predict in a three year data set. The five "most predictive" indicators are used to predict 180 calendar day future returns of the market and simulated investment of hypothetical accounts is conducted in an independent six year data set based on the rolling regression future return predictions. Some indicators, most notably the VIX index, appear to contain predictive information which led to out-performance of the accounts that invested based on the rolling regression model's predictions. 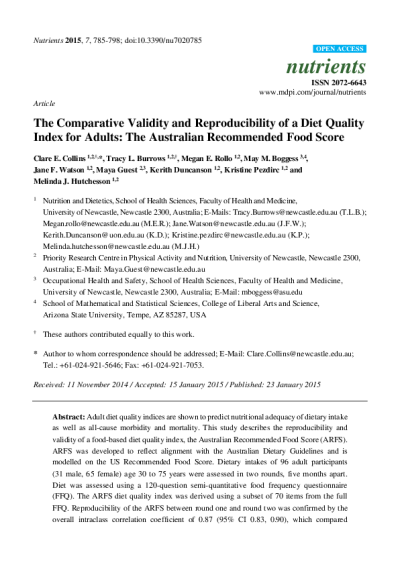 The Comparative Validity and Reproducibility of a Diet Quality Index for Adults: The Australian Recommended Food Score

Adult diet quality indices are shown to predict nutritional adequacy of dietary intake as well as all-cause morbidity and mortality. This study describes the reproducibility and validity of a food-based…

Adult diet quality indices are shown to predict nutritional adequacy of dietary intake as well as all-cause morbidity and mortality. This study describes the reproducibility and validity of a food-based diet quality index, the Australian Recommended Food Score (ARFS). ARFS was developed to reflect alignment with the Australian Dietary Guidelines and is modelled on the US Recommended Food Score. Dietary intakes of 96 adult participants (31 male, 65 female) age 30 to 75 years were assessed in two rounds, five months apart. Diet was assessed using a 120-question semi-quantitative food frequency questionnaire (FFQ). The ARFS diet quality index was derived using a subset of 70 items from the full FFQ. Reproducibility of the ARFS between round one and round two was confirmed by the overall intraclass correlation coefficient of 0.87 (95% CI 0.83, 0.90), which compared favourably to that for the FFQ at 0.85 (95% CI 0.80, 0.89). ARFS was correlated with FFQ nutrient intakes, particularly fiber, vitamin A, beta-carotene and vitamin C (0.53, 95% CI 0.37–0.67), and with mineral intakes, particularly calcium, magnesium and potassium (0.32, 95% CI 0.23–0.40). ARFS is a suitable brief tool to evaluate diet quality in adults and reliably estimates a range of nutrient intakes. 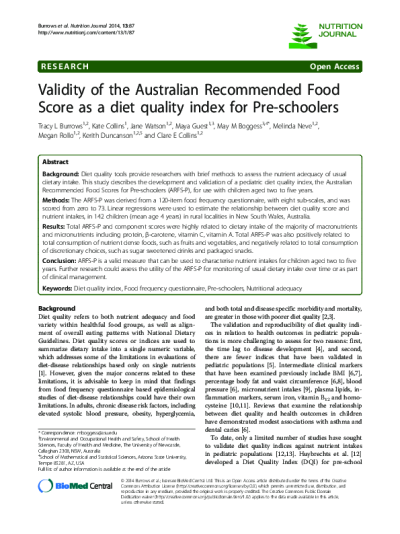 Background
Diet quality tools provide researchers with brief methods to assess the nutrient adequacy of usual dietary intake. This study describes the development and validation of a pediatric diet quality…

Background
Diet quality tools provide researchers with brief methods to assess the nutrient adequacy of usual dietary intake. This study describes the development and validation of a pediatric diet quality index, the Australian Recommended Food Scores for Pre-schoolers (ARFS-P), for use with children aged two to five years.
Methods
The ARFS-P was derived from a 120-item food frequency questionnaire, with eight sub-scales, and was scored from zero to 73. Linear regressions were used to estimate the relationship between diet quality score and nutrient intakes, in 142 children (mean age 4 years) in rural localities in New South Wales, Australia.
Results
Total ARFS-P and component scores were highly related to dietary intake of the majority of macronutrients and micronutrients including protein, β-carotene, vitamin C, vitamin A. Total ARFS-P was also positively related to total consumption of nutrient dense foods, such as fruits and vegetables, and negatively related to total consumption of discretionary choices, such as sugar sweetened drinks and packaged snacks.
Conclusion
ARFS-P is a valid measure that can be used to characterise nutrient intakes for children aged two to five years. Further research could assess the utility of the ARFS-P for monitoring of usual dietary intake over time or as part of clinical management. Background
The influence of occupation and ex/passive smoking on inflammatory phenotype is not well understood. The aim of this study was to examine the relationship between occupation, past smoking and…

Background
The influence of occupation and ex/passive smoking on inflammatory phenotype is not well understood. The aim of this study was to examine the relationship between occupation, past smoking and current passive smoking and airway inflammation in a population of adults with refractory asthma.
Methods
Sixty-six participants with refractory asthma were characterised. Occupational exposure to asthma causing or worsening agents were identified with an asthma-specific job exposure matrix. Exposure to passive cigarette smoke was determined by questionnaire and exhaled carbon monoxide assessment. The carbon content of macrophages was assessed in a sub-group of participants.
Results
Nineteen participants had smoked previously with low smoking pack years (median 1.7 years). Ex-smokers more commonly lived with a current smoker (26% vs. 9%, p = 0.11) and were more likely to allow smoking inside their home (26% vs. 4%, p = 0.02) compared to never smokers. Twenty participants had occupations with an identified exposure risk to an asthmagen; thirteen had exposures to irritants such as motor vehicle exhaust and environmental tobacco smoke. Sputum neutrophils were elevated in participants with asthma who had occupational exposures, particularly those who were diagnosed with asthma at a more than 30 years of age.
Conclusions
Sputum neutrophils are elevated in refractory asthma with exposure to occupational asthmagens. In addition to older age, exposure to both environmental and occupational particulate matter may contribute to the presence of neutrophilic asthma. This may help explain asthma heterogeneity and geographical variations in airway inflammatory phenotypes in asthma. Background
Mating behaviors in simple invertebrate model organisms represent tractable paradigms for understanding the neural bases of sex-specific behaviors, decision-making and sensorimotor integration. However, there are few examples where such…

Background
Mating behaviors in simple invertebrate model organisms represent tractable paradigms for understanding the neural bases of sex-specific behaviors, decision-making and sensorimotor integration. However, there are few examples where such neural circuits have been defined at high resolution or interrogated.
Methodology/Principal Findings
Here we exploit the simplicity of the nematode Caenorhabditis elegans to define the neural circuits underlying the male’s decision to initiate mating in response to contact with a mate. Mate contact is sensed by male-specific sensilla of the tail, the rays, which subsequently induce and guide a contact-based search of the hermaphrodite’s surface for the vulva (the vulva search). Atypically, search locomotion has a backward directional bias so its implementation requires overcoming an intrinsic bias for forward movement, set by activity of the sex-shared locomotory system. Using optogenetics, cell-specific ablation- and mutant behavioral analyses, we show that the male makes this shift by manipulating the activity of command cells within this sex-shared locomotory system. The rays control the command interneurons through the male-specific, decision-making interneuron PVY and its auxiliary cell PVX. Unlike many sex-shared pathways, PVY/PVX regulate the command cells via cholinergic, rather than glutamatergic transmission, a feature that likely contributes to response specificity and coordinates directional movement with other cholinergic-dependent motor behaviors of the mating sequence. PVY/PVX preferentially activate the backward, and not forward, command cells because of a bias in synaptic inputs and the distribution of key cholinergic receptors (encoded by the genes acr-18, acr-16 and unc-29) in favor of the backward command cells.
Conclusion/Significance
Our interrogation of male neural circuits reveals that a sex-specific response to the opposite sex is conferred by a male-specific pathway that renders subordinate, sex-shared motor programs responsive to mate cues. Circuit modifications of these types may make prominent contributions to natural variations in behavior that ultimately bring about speciation. 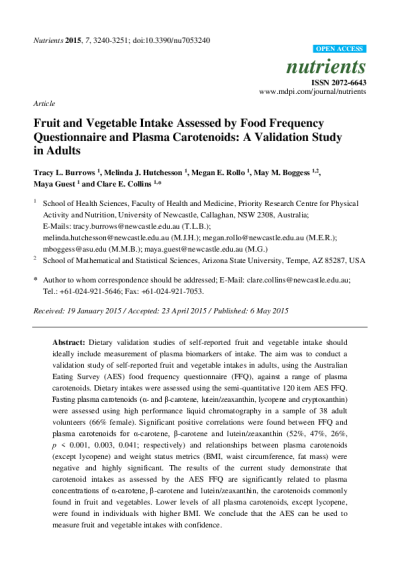 Dietary validation studies of self-reported fruit and vegetable intake should ideally include measurement of plasma biomarkers of intake. The aim was to conduct a validation study of self-reported fruit and vegetable intakes in adults, using the Australian Eating Survey (AES) food frequency questionnaire (FFQ), against a range of plasma carotenoids. Dietary intakes were assessed using the semi-quantitative 120 item AES FFQ. Fasting plasma carotenoids (alpha- and beta-carotene, lutein/zeaxanthin, lycopene and cryptoxanthin) were assessed using high performance liquid chromatography in a sample of 38 adult volunteers (66% female). Significant positive correlations were found between FFQ and plasma carotenoids for alpha-carotene, beta-carotene and lutein/zeaxanthin (52%, 47%, 26%, p < 0.001, 0.003, 0.041; respectively) and relationships between plasma carotenoids (except lycopene) and weight status metrics (BMI, waist circumference, fat mass) were negative and highly significant. The results of the current study demonstrate that carotenoid intakes as assessed by the AES FFQ are significantly related to plasma concentrations of alpha-carotene, beta-carotene and lutein/zeaxanthin, the carotenoids commonly found in fruit and vegetables. Lower levels of all plasma carotenoids, except lycopene, were found in individuals with higher BMI. We conclude that the AES can be used to measure fruit and vegetable intakes with confidence.